I had a rough night at the Best Western in Fort Collins. Right after I went to bed I started itching, ankles, elbows, and nose. When I got to Durango I picked up some cortisone. The pharmacist said it would stop the itching. Nope it didn’t work.

In 2009 while on a ride to National Police Week in Washington, D.C., I woke up with identical bites. I was covered from the soles of my feet to my waist. It was so bad I wound up in an ER in Asheville, North Carolina. Bugs always get me. If ten people are in a line and one person gets bug bit, that’s me.

These “bites” forced me home early. I called Kaiser, “You need to get in here right away. You probably had an allergic reaction, not bites.”

When I saw the Dermatologist, he said; “It’s probably an allergic reaction, but I really don’t know what it is.”

I got to Thunder Mountain H-D in Loveland, Colorado at 8:15 a.m. for an oil and filter change. They had me back on the road at 10:15 a.m. The largest dealership I’ve ever seen, this picture does not do it justice.

In addition to this building, they have an amphitheater that seats several hundred. And yes, I did buy another T-Shirt. That made three. I didn’t know what to do with my collection of Ts. Somewhere in the vicinity of 150, my wife has this selfish idea that her Hope Chest should not be filled with Harley T-Shirts.

Riding gave me plenty of time to think about all those T-Shirts. I came up with a plan. I had quilts made for my children. I managed to get quilts made for all four in time for Christmas. 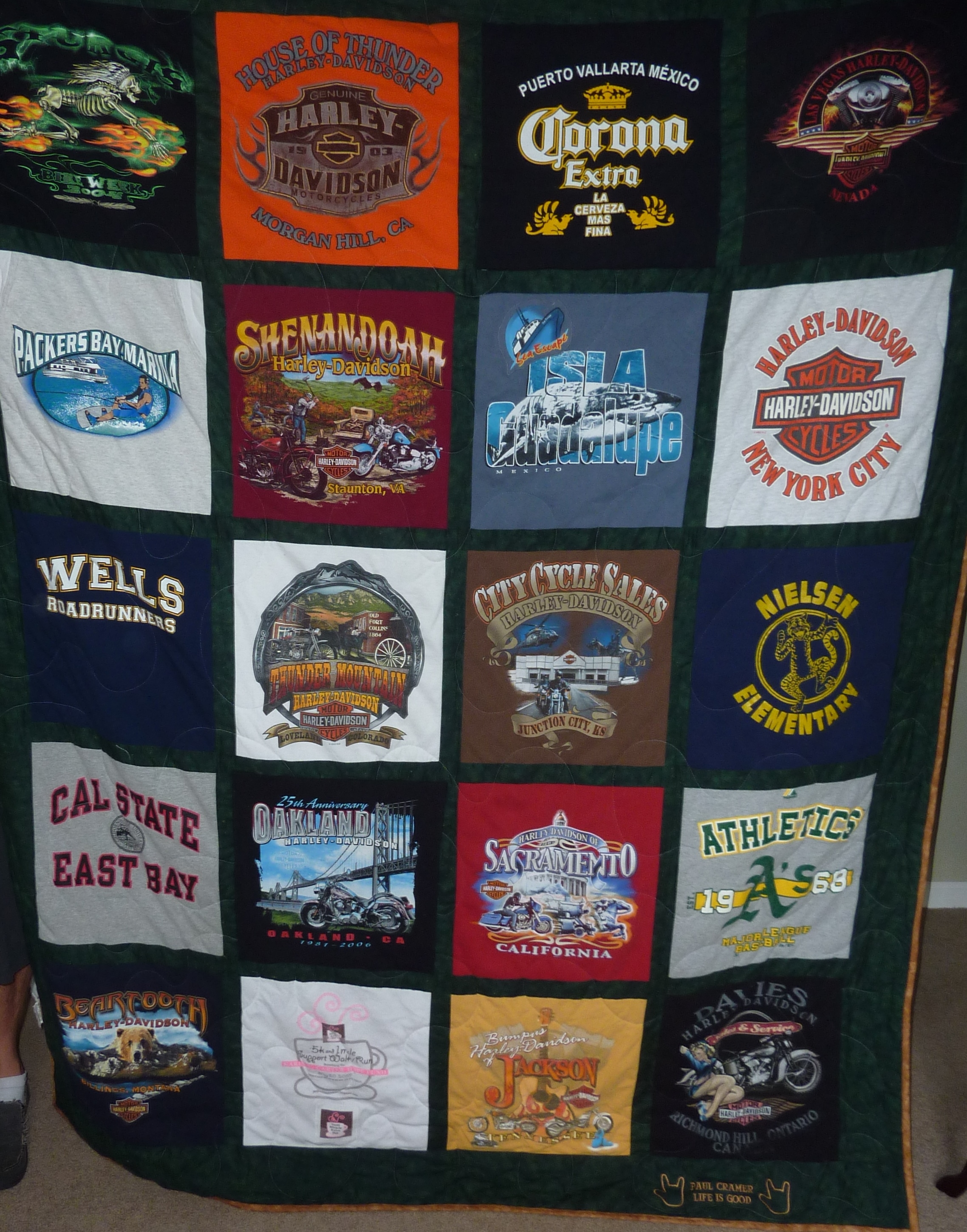 Above is the personalized quilt I had made for my son Paul. It is a combination of Harley Ts and shirts from his life. I especially like the Isla Guadalupe T. It is from a Great White Shark Dive the boys and I went on a few years ago.

Before reaching Denver, I had the bajeebers scared out of me. Trying to keep up with a LOL (little old lady) driving a Prius at about 85 MPH, a tractor with an empty flatbed trailer tried to drive over me. It took me back to the 2009 ride to the National Law Enforcement Officers Memorial in Washington, D.C. In Arkansas another LOL warned me and my three OPD buddies to be careful on I-40. She said “those darn truckers think they own the road”. She was right. Not quite into Tennessee a tractor with an empty flatbed blew by me. I wonder how fast he’s going. I tried to pace him. At 100 MPH he was still pulling away, I decided it wasn’t important enough.

The day was far from over but time runs short. I’ll finish Day 10 in a few days – See Installment #2.