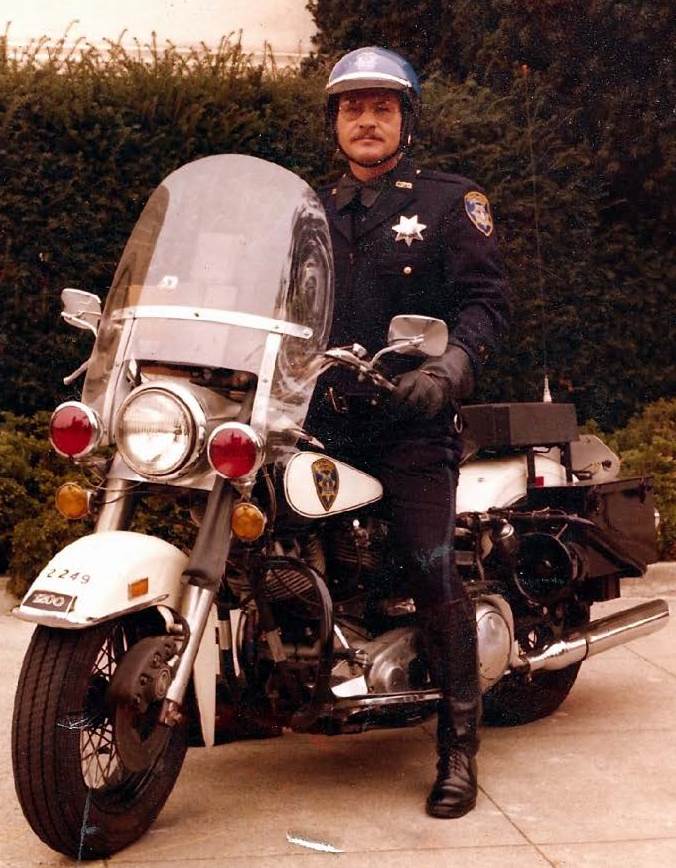 Some have wondered about JAK aka Jim Bob aka James Kennemore. He’s a great friend, albeit much older. We met in the nineties, when I hired him at Frasco Investigations after he was referred by a mutual friend. Jim had been retired from Oakland Police for a number of years by then. When Jim retired, his wife insisted he get a job. He resisted and held her at bay for years. Finally Sue put her foot down, get a job or else.

When Jim came in for an interview, I wanted to talk about Harley-Davidson Motorcycles. Jim said, “I want a job, but I don’t want to work.” His wish was to tell Sue, “I got a job, now get off my back.”

I won’t claim that our relationship was a marriage made in heaven. We both got something out of it. I got a buddy who is a great story teller. Jim told Sue he had a job. He told me, “I don’t want to work more than three hours a week.” I can’t imagine what he told Sue.

Most days I rode my DynaWideGlide to work. It wasn’t long before Jim wanted to get a motorcycle. Once again Sue put her foot down, “No way in hell are you getting another motorcycle.”

In 2001, my wife got me a Harley-Davidson Ultra Classic. It was a Peace Officer special at a reduced price. The Ultra was the second motorcycle Cathy gave me. The first was a bored out, customized Honda 750. It could get to 115 mph in a minute.

I had to get rid of the DynaWideGlide. I made Jim a foolish offer he couldn’t refuse. Cathy had a fit, “you gave the bike away to Kennemore”. She still reminds me what a fool I was. Jim on the other hand whined that I was screwing his eyes out. I didn’t pay any attention to either of them. I had a great new bike. I still have it.

The Ultra will probably be my last motorcycle. Whenever I get dreamy at a Harley Dealership, Cathy is ready. “You will be buried on your Ultra.”

What is a man to do?

A few years later, I had to return from Sturgis by air. Jim rode the Ultra back. He was hooked and got an Ultra of his own. I often wonder what he told Sue.

We have a couple of extended rides planned for this summer. I’ll tell you about our plans later. 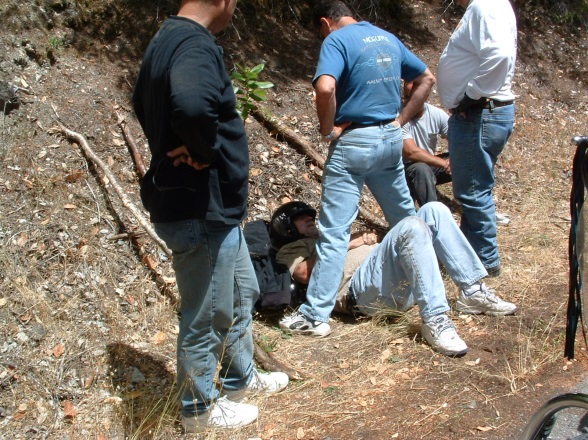 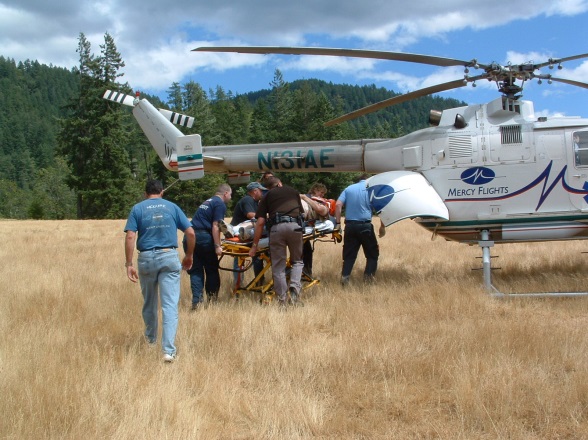 No day is complete without a visit from Jim Bob. Day 7 he got a brochure for the battlefield museum at Exit 514. 8:00 a.m. we are running down I-90 when we pass a sign for the Little Big Horn Battlefield, Exit 509. Jim Bob kept a-going. We get to Exit 514. No battlefield.

The folks at the motel had told us of a good restaurant across from the park. No restaurant or park in sight. Wearing a sheepish grin, Jim Bob took off on the frontage road. He saw ‘his’ first road kill of the day, a horse. Now a horse is pretty good sized. Jim Bob pointed but I didn’t see a horse. Maybe the horse is with the brown bear Jim Bob saw a few days before.

Back at Exit 509 we find the battlefield and restaurant. The restaurant sits about 20 people, the gift holds a couple hundred. After the slowest service ever, we got our food. JAK was happy, not I. My over medium eggs were broken and hard. The hash browns were not exactly cold, but close. All is forgiven because the coffee was excellent.

Cathy and I ate there with son Jonathan about 30 years ago. He was 10. He never stopped talking not matter how much we cajoled, promised or threatened. One time I offered him $10 to stop talking for 10 minutes. He didn’t last 5 minutes. I kept the $10.

We asked the manager about road conditions heading east. I told him; “I can take either I-90 or US 212. 212 looks shorter and more interesting.”

He said, “212 is quicker and a better ride, but it was closed yesterday by heavy smoke.”

I beg to differ. The road was closed by fire. Only two miles east the fire had come down and jumped 212.

After eating we went to the battlefield. Our Senior Park Access passes got us in for free. JAK had never been to the battlefield, this was my third visit. It has changed over the years. The first time I visited was probably 35 years ago. Then it was mostly good soldier, bad Indian. Now the presentation is more evenly matched with an explanation from the Sioux’s point of view. They and their allies were cheated and mistreated.

The battlefield is on the Crow Indian Reservation. They conduct bus tours, we should have taken one. We heard a young Crow Indian speaking. He pointed out where events had taken place. If I ever visit here again, the tour will be a must do. The Indian warriors who died here have much newer and nicer monuments than the soldiers.

JAK and I part company

JAK rode to Casper, Wyoming where he stayed in a very upscale Best Western, with bar, restaurant, pool, and laundry. His rent was $105. I stayed in Motel Kozy, Spearfish, South Dakota for $118. I didn’t have any of those amenities. I had cinder block walls and a bar next door full of noisy bikers.

US 212 is an excellent two lane road, wide and well maintained. For most of the 235 miles I was on it, my cruise control was set at 75.

The first burned area, only two miles from the restaurant, was still smoldering. It stretched for six miles. The fire had jumped the road in a few places. Over the next 60+ miles, I never went more than five miles between fresh burns. Most of the farm homes were islands in a sea of black. The firefighters worked heroically to save them. I saw only one burnt to the ground. I heard that about 60 homes had been lost.

The temperature never dropped below 100.

I got to Spearfish, and changed into shorts and a tank top. I had to show off the tattoos. Without JAK to nag me, I put the helmet away. I held my speed to 80-85 for the ride into Sturgis.

The Sturgis Motorcycle Rally begins the first Monday in August. This was the first day of the rally and my sixth or seventh visit. I usually arrive when it is in full swing. Things were a little subdued compared to what I’ve experienced. The population of the town is about 8,500. During the rally they expect at least 500,000 bikers to pass through.

At least ten blocks of Main Street are for motorcycles only. Bikes are parked on each side of the road and two deep in the center. Side streets are set up the same way.

I got an “I rode mine” patch. Many haul their bikes in trailers; I’ve been guilty of that sin.

I walked around until 7:00 p.m., ate nasty food, visited the Jack Daniels site and had my one drink. It was 95 degrees. When I got to Spearfish the sun was blocked by clouds. It was still 90.

One heck of a mystery!

My friend, Julie Royce, was an Assistant Attorney General in Michigan where she prosecuted doctors who violated their oath to do no harm. Many of her cases involved over-prescribing for profit. She has used her experiences to create the background for a fictional tale of murder, greed and betrayal.

I had the pleasure of being a Beta Reader for her thriller, PILZ. An avid mystery reader, I am hard to please. PILZ had me from beginning to end, a great story, a great mystery. 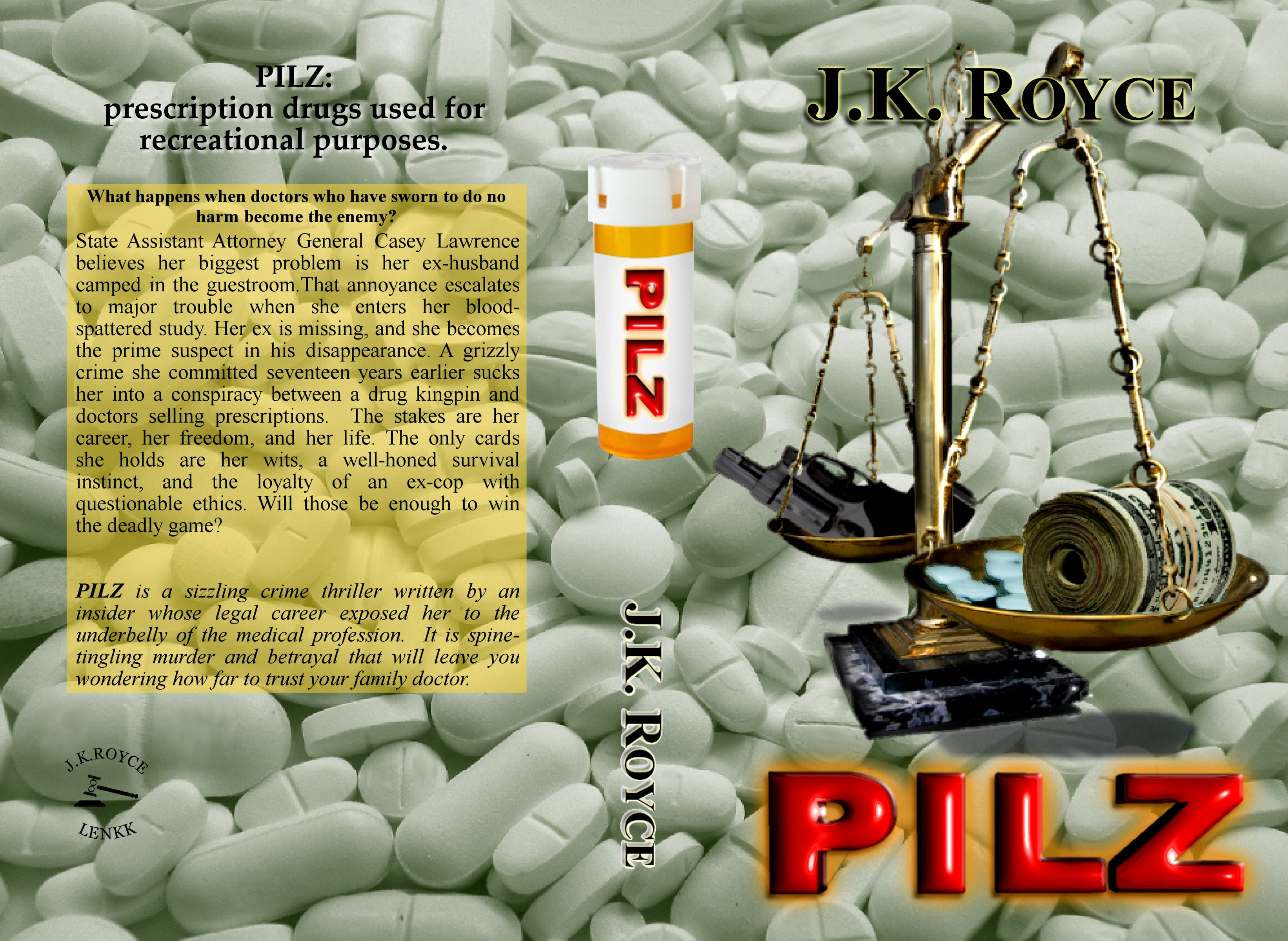 Published earlier this month, it is available on Amazon. I encourage you to order a copy today.

You can learn more about Julie at: