I am not a big fan of the Red Cross.

I am a tremendous fan of the Red Cross Blood Donation Program. My wife is one of those who have cards for donating regularly for twenty, maybe thirty years. I was a sporadic donor until I learned about Platelet Donation. I never have to make an appointment, they call me. Unlike whole blood you can give every few weeks. I get calls that almost always begin with, “Mr. Cramer we have a desperate need for AB+ at Children’s Hospital. Can you come in….” 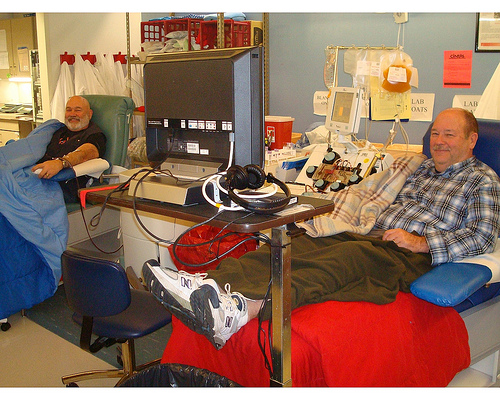 These two men are platelet donors.

Here is some information about platelet donation:

“During a platelet donation, a small portion of your blood (about 1/4 pint at a time), is drawn from your arm and passed through a sophisticated cell-separating machine. The machine collects the platelets and safely returns the remaining blood components, along with some saline, back to you. After the donation you can resume your normal activities, avoiding heavy lifting or strenuous exercise that day.

Many patients who need platelets are undergoing chemotherapy or organ transplant and have weakened immune systems. A platelet dose from a single donor reduces the patient’s exposure to multiple donors and is therefore preferred by many physicians.

One platelet donation can be worth from 12 to 18 whole blood donations.”

If you decide to donate platelets, they will test you. If you qualify, plan on spending three hours or more. They have Netflix so you can watch the movie of your choice.

Adrian McKinty is an Irish novelist currently living in St. Kilda, Australia. Below is a posting from his blog I found interesting and want to share. For the complete article click on http://adrianmckinty.blogspot.com/ and scroll down to Sunday, May 12, 2013.

15 Things I’d Like To Ban From Contemporary Crime Fiction

Crime fiction has gotten very dull lately hasn’t it? I should know because I get inundated with galleys and review copies and most of them are beyond tedious, without a spark of wit or a well turned phrase in any of them. And the cliches, Jesus the cliches. And the violence. Especially violence towards women and children…It’s almost impossible to read some of this stuff and it makes me wonder how and why these authors ended up writing it. Were they pressured by editors or a feeling that this is what the market demands? I wonder if they ever get embarrassed. I know I get ashamed when I find myself falling into cliche or hacky situations or when the dialogue sounds tinny and false. I’m guilty, I’ll admit it, but I can’t be the only one, can I?

1. Clever serial killers
2. Stupid serial killers
3. Child Murderers
4. Serial Rapists
5. Everything from Scandinavia
6. Torture Porn
7. Working class stereotypes
8. Architects
9. Gallery owners
10. Books with recipes
11. Detectives baffled by basic scientific facts/mathematics
12. Detectives who solve crimes with magic or fairy dust (Lizbeth Sallander, the BBC’s Sherlock etc.)
13. Detectives who solve crimes with cats
14. Cops who haven’t heard of Ernest Hemingway or other basic elements of contemporary culture (this is an extension of #7 above).
15. Super villains. I’ll explain this one. There’s an entirely fallacious belief out there that gets repeated all the time (I heard JJ Abrams repeating it on TV not ten minutes ago) that a hero is only as good as the villain is bad. The hero is supposedly ‘defined by the villain.’ This is utter nonsense. In a well made narrative you don’t even need a villain or a decent McGuffin you just need a good story and fascinating characters. JJ Abrams worships at the throne of Spielberg but he should remember that the shark in Jaws only appeared on screen for about two minutes and its Spielberg’s best movie. And sometimes the most interesting part of the journey is the voyage the hero takes inside his own head. Nach innen geht der Geheimnisvolle Weg, as Novalis said. “Inward goes the way full of mystery.” You know?
…
Of course with a good story, good dialogue and good characters you can break all the rules above and have yourself a terrific book. But still…you know what I’m talking about… and if you have your own ideas about things you’d like to ban or cliches you’d like to kill please don’t hesitate to let me know.

Four weeks from today Jim Kennemore and I will be back in Ely, Nevada. We will be on our way to Marseilles, Illinois. Saturday, June 15, 2013 is the 11th Annual Illinois Motorcycle Freedom Run. The run is to honor our fallen heroes and to support our troops. Visit the web site at http://ilmotorcyclefreedomrun.org/

The Middle East Conflicts Wall Memorial is located in Marseilles, Illinois. The names of the soldiers killed in action during the previous year are etched into the granite slabs right after Memorial Day, and those soldiers and their families and friends are honored at the annual Illinois Motorcycle Freedom Run on the third weekend in June. The ILMFR supports the Wall, and the etching of the names, with donations from supporters all over the county.

If any of you care to join Jim and I, just let one of us know. We’ll take a northern route so we can stop in Montana and visit SLPD & HPD retirees, Patrick and April Erskine.

The last day of this Great Ride was not a lot of fun, especially the last two hundred miles. Earlier I mentioned “bug bites” and how much they itched. They didn’t go away, daily a few more appeared. I called Kaiser hoping for a prescription. “No Mr. Cramer, we can’t do that. This could be a serious allergic reaction and you must be seen soon.” They scheduled an appointment for the next day. 550 miles made for a long last day as I headed home.

Now for some good news, no rain, no hail, no wind, and no blowing sand. Crossing from Utah into Nevada, a memory from another ride returned. A few years ago as we approached the Utah state line and a gas station, Larry Eade and I were running on fumes. Ahead of us JAK did not stop.

In the background is a blue sign with “Next Services 83 Miles”. JAK had no more fuel than Larry or I. He didn’t stop. We pulled in to the pumps. JAK came back a few minutes later to inquire why we had stopped.

Two signs stuck in my mind during this ride, the one above and one on I-70 a few miles from Green River. “Next Services 100 Miles”. With a range of 135 miles on the Ultra, I pay attention to signs like these.

This is indicative of the 259 miles from Ely to Fallon. I made it in exactly 4 hours, an average of 65 MPH. During those four hours, I made two gas and water stops, and twice for photo ops. I might have exceeded the speed limit once or twice.

About half way across Nevada I passed a woman riding a bicycle with camping bags. My thought, She must be one tough lady. Wow! Minutes later, I saw a herd of wild horses grazing alongside the roadway.

About a half hour from Fallon, Nevada a van stopped in my lane and a motorcycle stopped in the oncoming lane. As I rapidly decelerated my first thought was; Oh my God, there’s an accident, I hope it isn’t a biker. It wasn’t.

It’s a steer. I didn’t take another shot. It came at me and the Ultra. I jumped on and rode away.

A tradition is lunch at Jerry’s Restaurant in Fallon. They were so busy I had to sit at the counter where I downed two iced teas before ordering. I saw the biggest and best looking open faced chili cheese burger ever. It was smothered in onions. I want that chili cheese burger! Regrettably, I thought of Larry Eade and what he would say to “Gravy Boy.” I ordered a chef salad.

From Ely to Fallon the temperature hovered around 90. Leaving Fallon it shot up to over a 100 and stayed there.

I hit the only truly bad road of the entire trip as I crossed into California. The road became bumpy and in need of serious “Road Repair”. The last 200 miles were by far the worst, worse even than the rain and hail. Those were adventures, and the hail was certainly a new experience. I found the California highways dangerous and unpleasant.

At home, I found my missing boots on a stool. Handy so I wouldn’t forget to pack them. Oh, well, my sneakers got a good workout. I quickly changed into a bathing suit and jumped into the pool.

I put 4278 miles on the Ultra over thirteen days.

I hope you have gotten a wee bit of pleasure from my ramblings. Thank you all being such a great audience.

Four weeks from today I will be back in Ely, Nevada. Jim “JAK” Kennemore and I will be on our way to Marseilles, Illinois.