Twelve years ago we began a motorcycle riding tradition, the Brown Water Run. That first year we had about seven or eight riders. This year we had twenty-four riders and one chase vehicle.

Ken Green came the furthest, Scottsdale, Arizona. I’d say it was a tie with Keith Wallace, but one has to ride a motorcycle to complete the BWR. Keith’s Ultra Classic broke down before the ride even began. Our chase car driver/mechanic, Lauren Camera, managed to get it running Friday morning. But Saturday, the 6th it gave up the ghost (twice). Keith finished the ride in the chase vehicle. Before the BWR, he spent something like $1,600 getting the electrical system repaired. Can you guess what failed? Yes, you’re right the electrical system.

We began the 5th with seventeen of us having breakfast at Zac’s Restaurant in Dublin, California. About halfway through breakfast, a very attractive lady came into the restaurant. She looked about somewhat confused. After a moment or two she approached the group. “Are you all going on a motorcycle trip?”

A chorus of “yeses” echoed throughout the room.

To which the young lady responded, “Where’s Keith?”

Told that Keith had broken down, her shoulders drooped, she seemed to collapse within herself. She said, “I’m his daughter. He called me. He told me to be here.” She did not appear to be a happy camper.

At the appointed hour, seventeen motorcycles and the Train Mobile departed on the first leg of our adventure. The ride over the Santa Cruz Mountains and down State Route 1 to Carmel was picture perfect. I was leading when a strange thing occurred. Jim Kennemore passed me up and took over lead. My first thought, “Was I going too slow?” It soon became apparent that was not the case as Jim did not increase the speed, if anything he slowed somewhat. I was confused.

That evening when we were alone, I asked him, “Why did you pull in front of me on seventeen? You didn’t speed up.”

Much to my surprise his answer was, “To slow you down, you were going too fast.” That was a shocker. The last few times over this roadway, I was criticized for going much too slow.

At Carmel we picked up three more riders. Getting out of the gas station and back on the road was a fiasco. Instead of one cohesive group we had at least four clusters. We did not get back together until we reached Morro Bay.

We stopped near San Simeon and visited the sea elephants. If you ever get the chance, stop and watch these behemoths.

One group of riders stopped to eat at a large tourist trap. I’m told it took upwards of an hour to get their meals.

We picked up another four riders in Morro Bay. These folks came up from Los Angeles.

I wish I had the room to list all the great people who joined us on this ride. I will point out a pair of wounded warriors, Paul Wallace and Byron Atwater. Less than a month ago Paul fell off of his bicycle. Yes, bicycle. He suffered a punctured lung and several broken ribs. When his daughters learned that he rode the BWR, they had a hissy fit. Dad Wallace was placed on probation by the girls and his grandson. For Shame!

Byron had a double hernia operation three weeks before the ride. However, he had permission to ride. His lovely wife, who always sends chocolate chip cookies, gave him permission to ride. She assigned their son-in-law, Brad Bell to keep a close eye on Byron. To make his ride a better experience, Byron purchased an Ultra Classic. 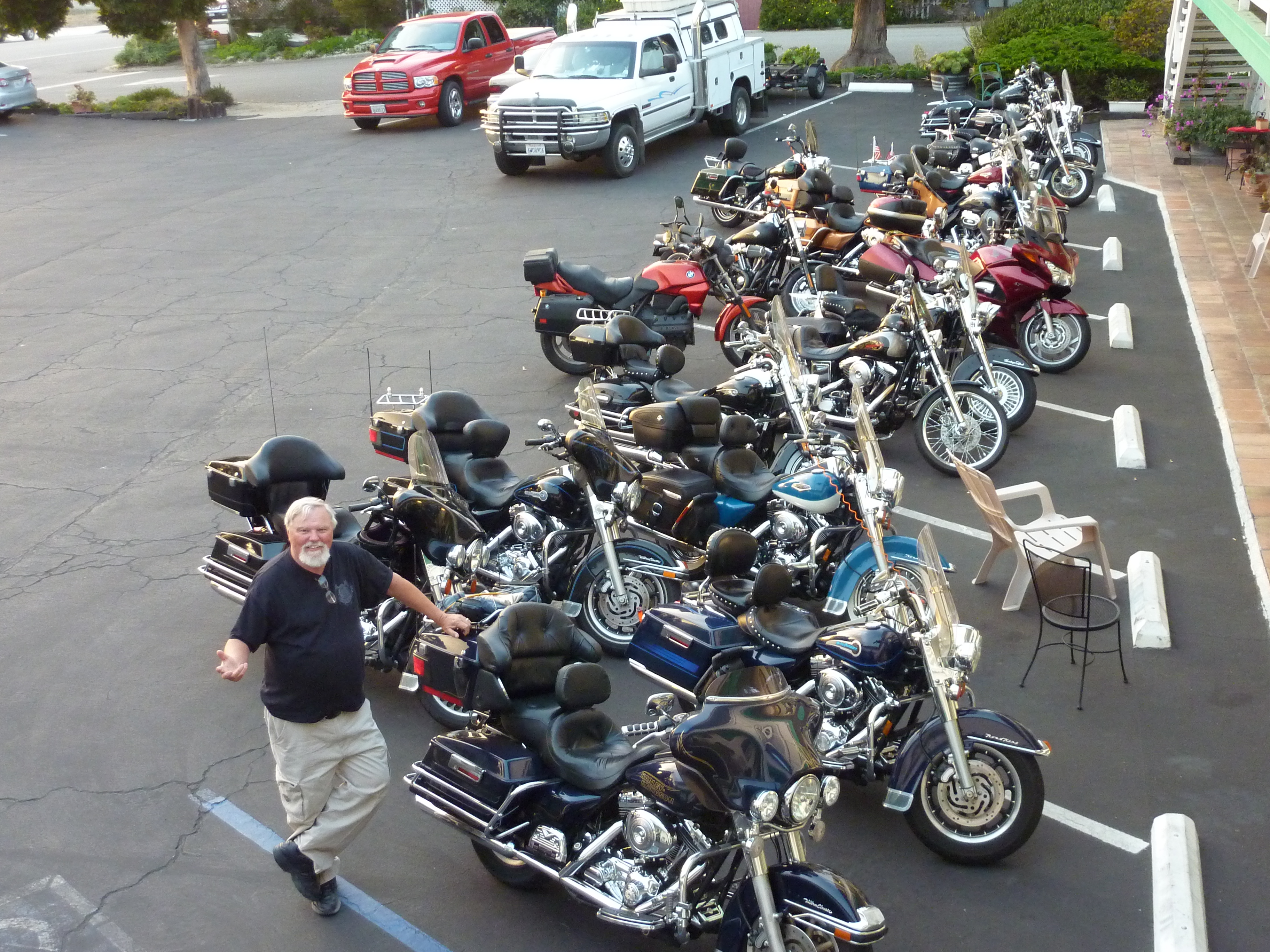 The white Dodge truck is Lauren Camera’s Train Mobile. He has a real train whistle that he plays from time to time. Once in Burney Falls he sounded off and created pandemonium. There are no train tracks near this small mountain town. Everyone except us BW Runners stopped cold and looked in all directions for the train. Lauren has a habit of picking the perfect time and place to sound off. If the horn doesn’t get you, the authentic train bell mounted under the truck certainly will.