Cruising Alaska’s Inside Passage on the Grand Princess

Friday, July 19, 2013 we boarded the Grand Princess at Pier 35, San Francisco. We chose this cruise because of its proximity to our home, only thirty-five miles. The last time we cruised to Alaska we flew to Vancouver, Canada, spent the night, and boarded the ship the next day. We enjoyed it, but it was a bit of a hassle and expensive.

If we board the ship in San Francisco, we won’t have any hassles. Nothing is hassle free. The first thirty-three miles took a half-hour. The mile or so along the Embarcadero took an hour.

The weather in Dublin was great. I dressed in proper tourist attire, shorts and Aloha shirt. San Francisco was cold and windy. It got worse. 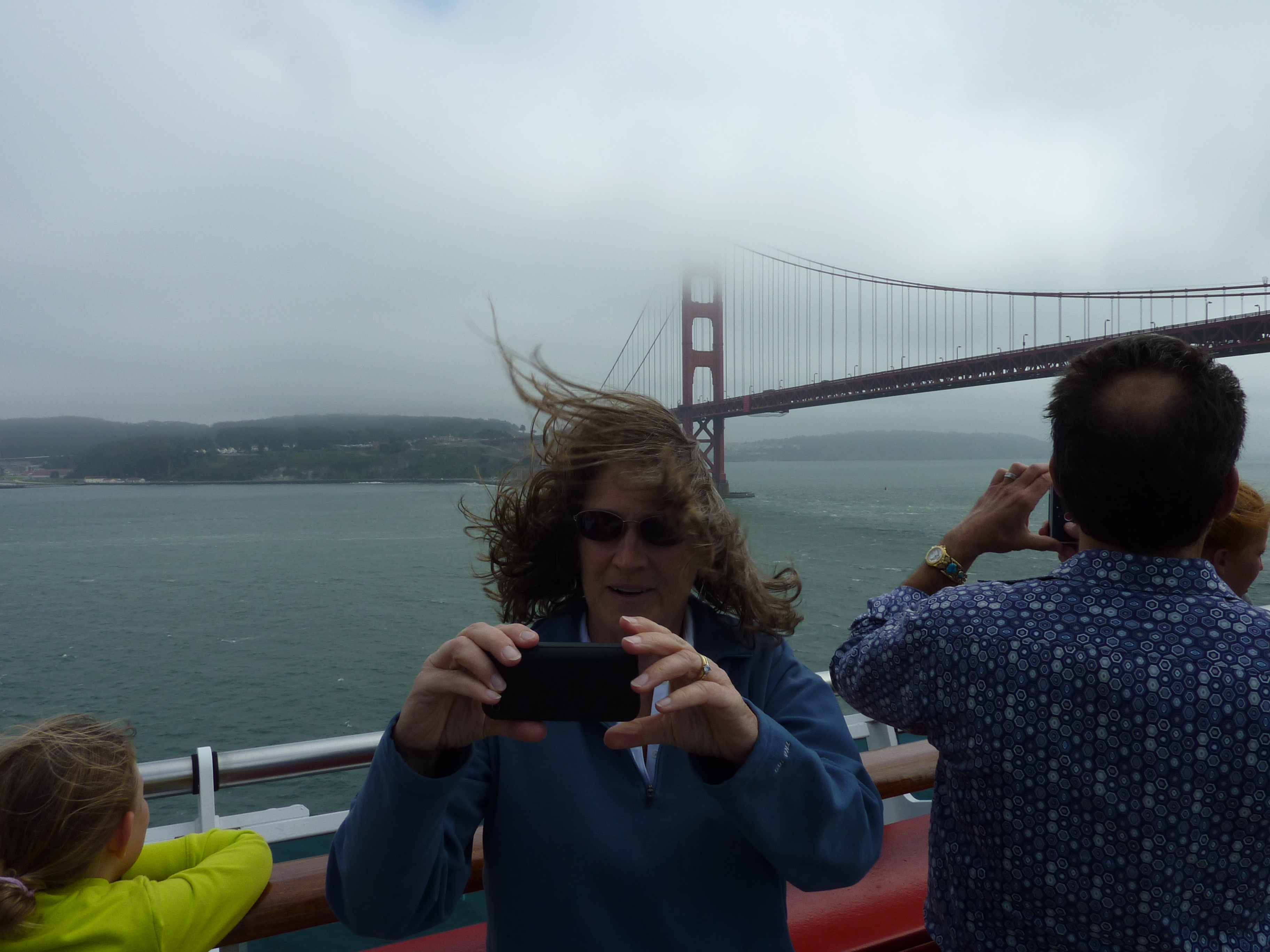 Notice the lack of California sunshine?

It got worse, much worse. The winds continued to increase throughout the night.

Saturday morning the captain came on the P.A. System with this announcement. “No Cause for Concern.”

Instantly alert, I turned to Cathy. “What the hell?”

The captain continued. “The winds coming across the bow are running at 40 knots.” Looking out our balcony window we could see that seas were running deep with more white caps showing than dark gray water. Wanting us to feel better and I assume to appreciate the mere forty knot wind, he continued. “Throughout the night we had sustained winds of sixty knots with gusts of eighty knots.” He had our attention. It got better, or maybe worse. It depends on your point of view. “Eighty knot wind is just shy of hurricane conditions.” Oh, Boy. “Although we have closed several areas of the ship for safety, there is no cause for concern.”

According to disastercenter.com, 80 knots equates to 92.2 miles per hour. Above 73 mph hurricane devastation occurs.

Saturday was spent at sea. Heavy seas kept everyone indoors. I didn’t even write. I spent the day eating and reading a novel by recently published author, I.C. Enger. I met her at the Public Safety Writers Conference in Las Vegas. Her book, Blue Ice, is the first in a series. I found the story very interesting, a page turner. Later in the week, I read her second book, Green Ice. The third in the series, Black Ice, is due out shortly.

Sunday we docked in Victoria, B.C. just as the weather broke. It was a beautiful day. We’ve been to Victoria several times and have seen most of the sights. It’s a good thing. Victoria was hosting a Good Guys type car show. The theme was Deuce Coupe. We learned that more than a thousand 1932 Ford Deuce Coupes were entered along with another thousand or so vintage cars and hot rods. Several locals told us, “This is the largest event ever held in Victoria.” I believed them. Most of the downtown streets were closed down. Almost all tours in town were cancelled. The open streets were worse than San Francisco. 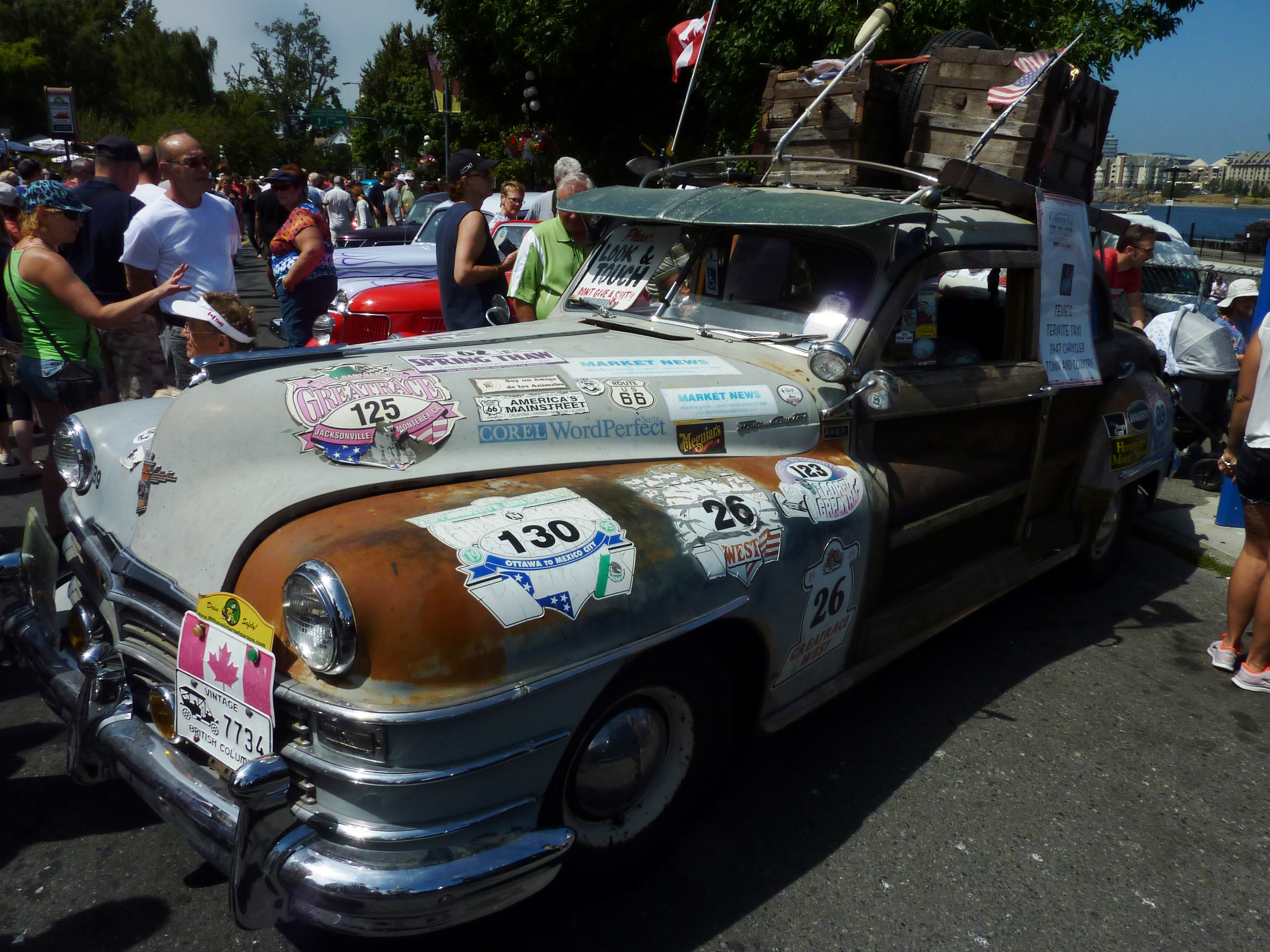 This was the only car not sporting a DO NOT TOUCH sign.

Every car entered in the show, and all the ones parked around town were brought in by ship and ferry.

We spent Monday at sea. It was a productive day. There is a library and game area on the ship. Just like at my home office, I couldn’t write in our room. Even though kids and adults play a variety of board games, it didn’t bother me. I rarely hear them, it is a pleasant distraction. Occasionally a group of adults will take over a couple of tables and each tries to outdo the other in volume. These are interruptions and they do bother me.

Cathy dragged me away for lunch. I returned in the afternoon. While A Tale of Robbers and Cops is out to an editor, I’m concentrating on my second novel. The story is about police officers working Anti-Gang Enforcement in the fictional city of Liberty, Arizona.