Cruising Alaska’s Inside Passage on the Grand Princess – Fourth Post

Skagway is accessible by car and draws a great many recreational vehicles. My brothers-of-the-road represented Harley-Davidson with motorcycles from Florida and Kentucky. Two or three of the Harleys had couples riding. The women had to be good sports. Some off brand two wheeled vehicles were allowed in town. I saw five BMWs from the Canadian Province of Quebec. 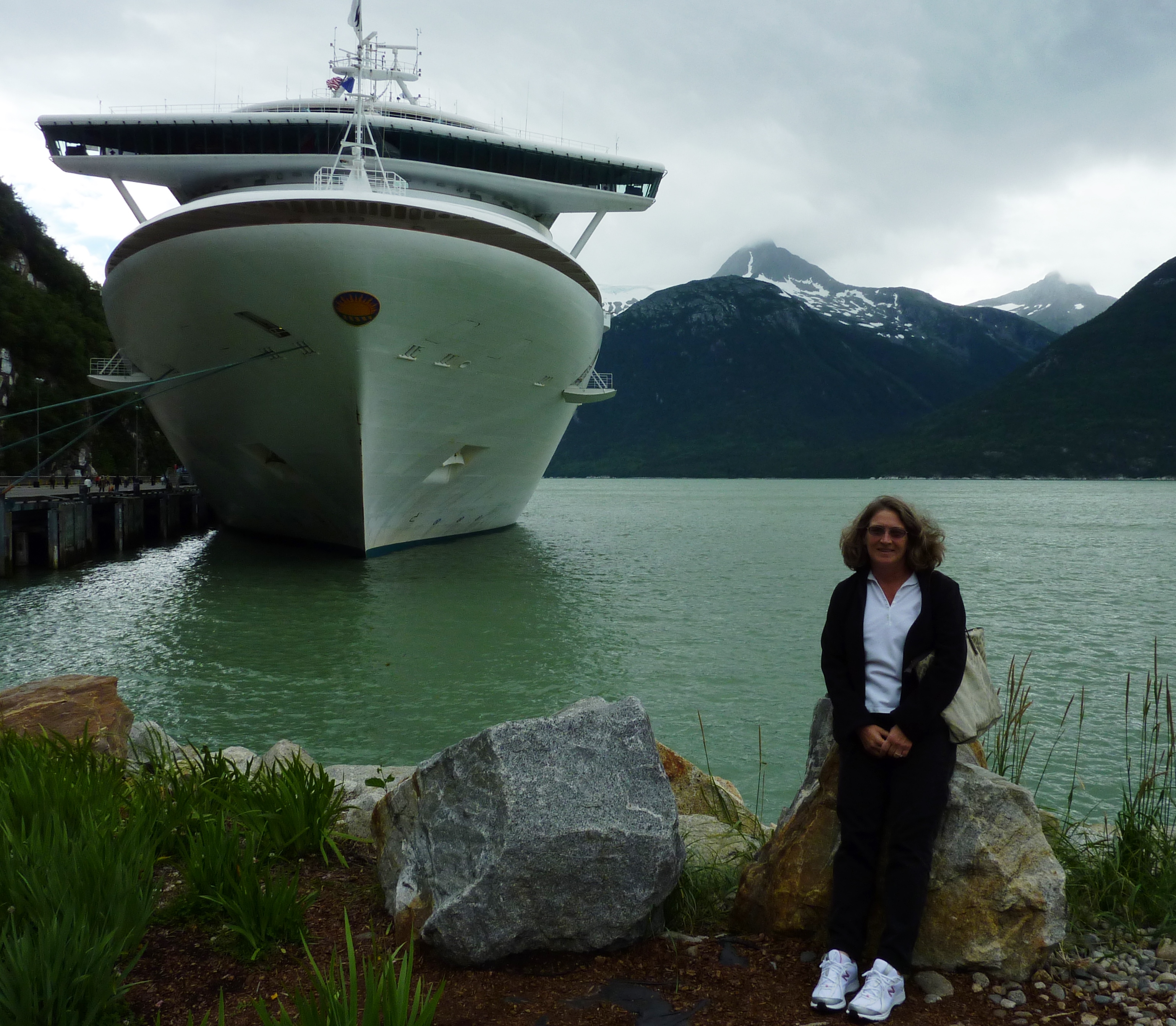 Cathy in front of the Grand Princess tied up in Skagway.

It was overcast and chilly when we disembarked for the morning. It warmed up and was great weather all day.

Once again we opted out of any organized tours. Shuttles run from the docks to Skagway and beyond from early morning until the last cruise ship departs. We got one of the good drivers who gave us a running talk about the town.

One pays when exiting the bus. The shuttles have two options, two dollars for each trip or five for unlimited rides. I found it surprising the number of people who took the two dollar choice. I got a better deal. Our driver announced, “I refuse to charge veterans. If you’re a vet let me know.” When I reached him I Said, “U.S. Navy” and rattled off my serial number. He stamped my hand for unlimited rides.

The man behind me wore a submarine service cap. As he handed over his money, the driver said, “No sir” and reached to stamp his hand. The man said, “It’s my son’s, he serves. I didn’t.” Two men, both class acts. 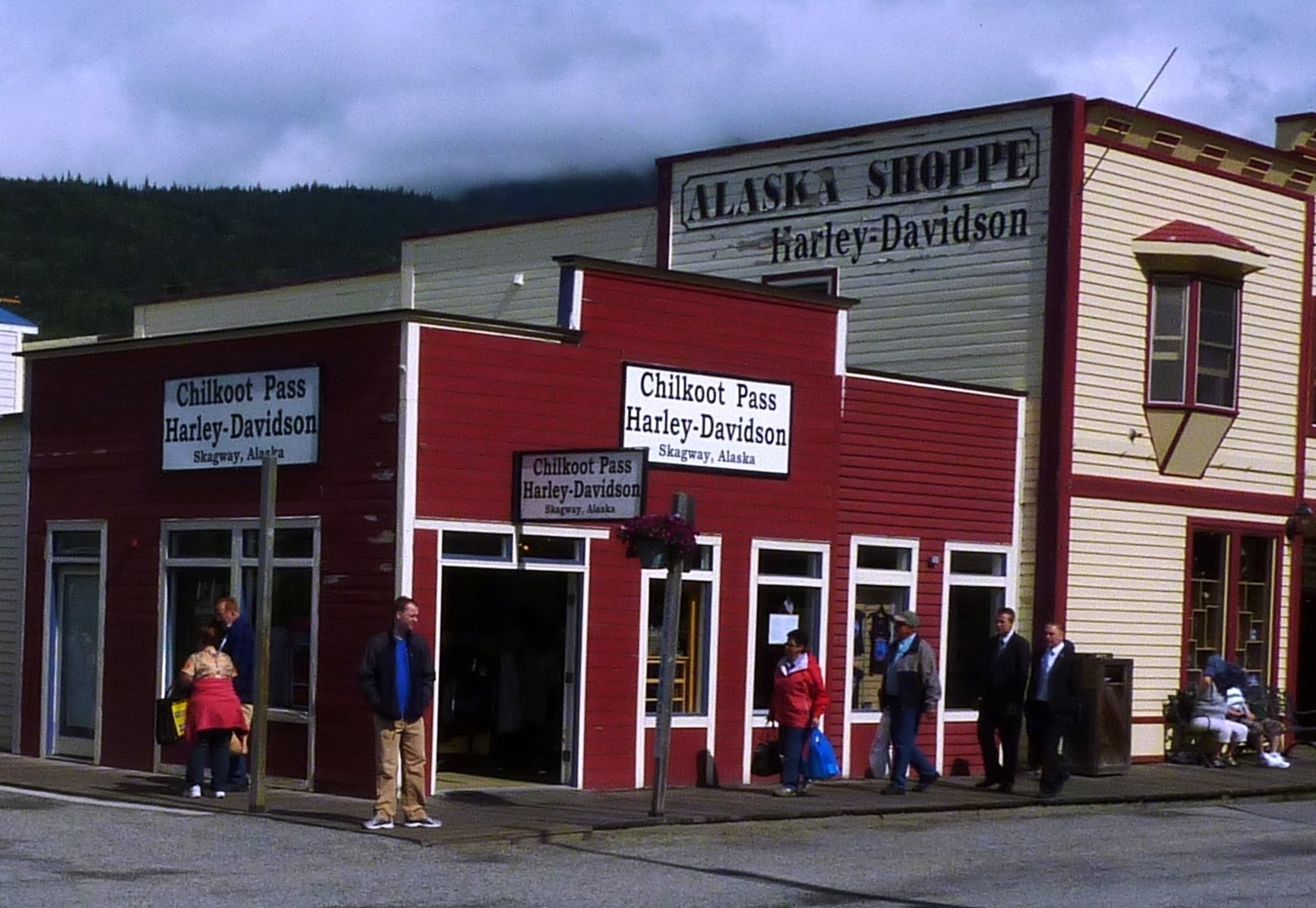 None of the Harley-Davidson stores we visited sold motorcycles or parts.

This outlet did not have an authorized Harley-Davidson sign visible on the outside. I have a feeling it’s the result of some local ordinance because none of the franchised stores in town had a company logo visible.

I splurged and bought two T-Shirts. In addition to the usual pocket T-Shirt, I saw a great looking design on a bright yellow T-Shirt. She-who-must-be-obeyed was not happy. Oh well, once in a while one must show a little rebellious behavior.

Back on the shuttle, we rode out to one of the must see destinations. We glanced at each other. “Nope, it’s a tourist trap.” We stayed on the bus. The next attraction received the same response. Riding back to town gave us an opportunity to interrogate the driver.

We stopped at the local museum. Cathy and I have travelled to Europe and Asia. We always make it a point to visit hardware and grocery stores. The ones in Skagway are nowhere as interesting as those in Japan, but the items they stock, are different enough to make it worth ones time. Over at the IGA Grocery store, apples were almost three dollars apiece.

Homes sell from $25,000 up to $400,000. All are small. Building materials must be brought in from great distances and there are no local construction companies. Our driver told us about a house built by a man and his family. Construction of a single room and bathroom was accomplished one summer, over the next four or five years the home was completed. The family now lives in a seven-hundred square foot house.

Here is an interesting story, “We don’t get much snow here. We have sustained winds of 50 MPH up the channel. The snow is dumped in the ocean. What we get comes in horizontally. We get two or three inches of ice sheets dropped here.” 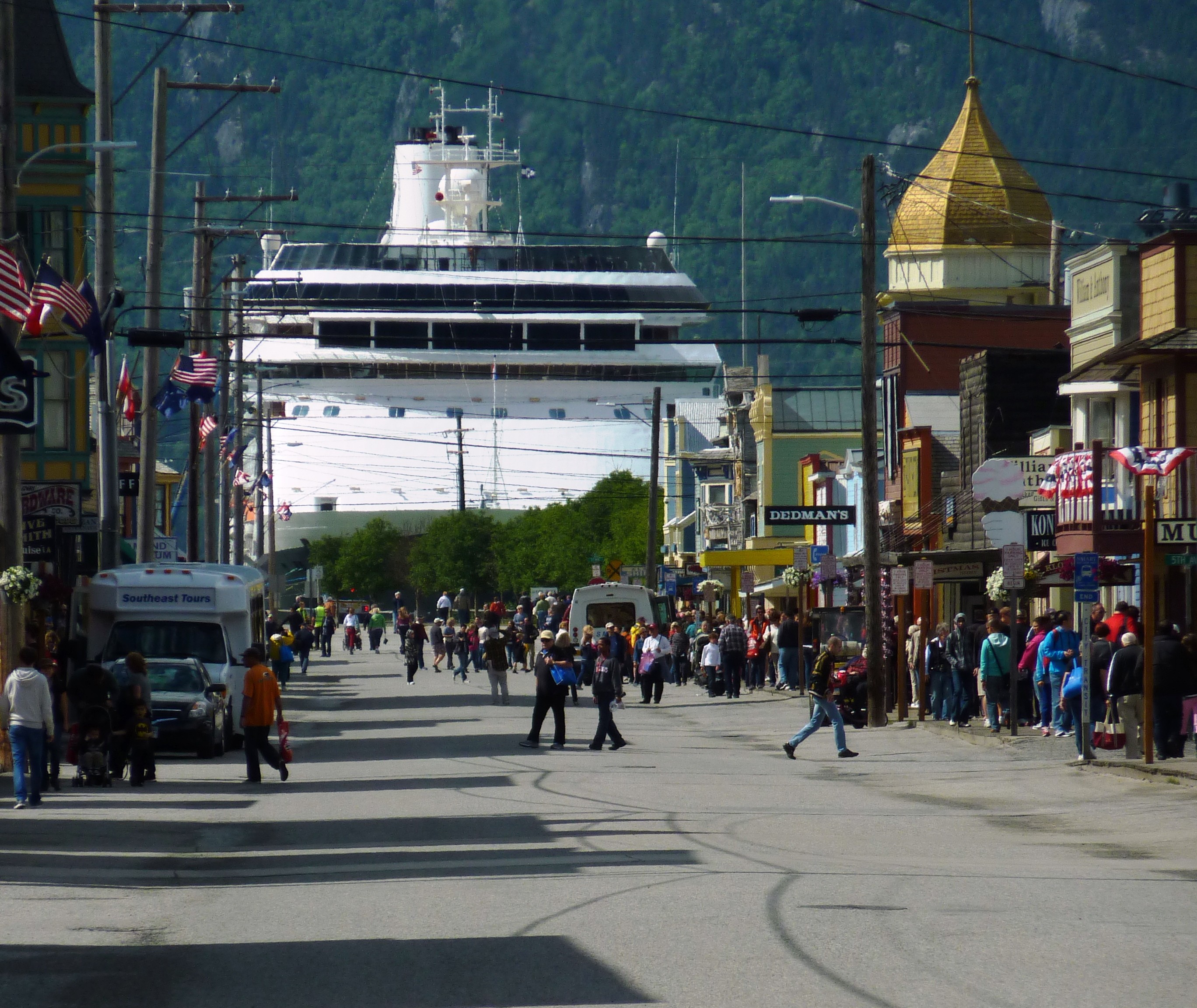 Looking down the main street one can see another Princess cruise ship docked at the end. Parking is limited to fifteen minutes with a threat of towing. Oddly, an Ultra Classic Harley Davidson, Kentucky license plate, was parked on the street for at least five hours. It was not cited, nor was it towed. But then we never saw a single police officer or cop car.

When it came time to return to the ship, I bought three bags of popcorn and hopped on a shuttle. As I should have expected, she dumped me. “I’ll walk. It’s only a mile or so.” Thirty years of marriage and she still has the energy of a teenager.

While I was writing, a choral group of Grand Princess Passengers put on a show in a nearby lounge. The sound was outstanding. They finished up with Neil Diamond’s Sweet Caroline. Their rendition brought tears to the beast’s eyes. 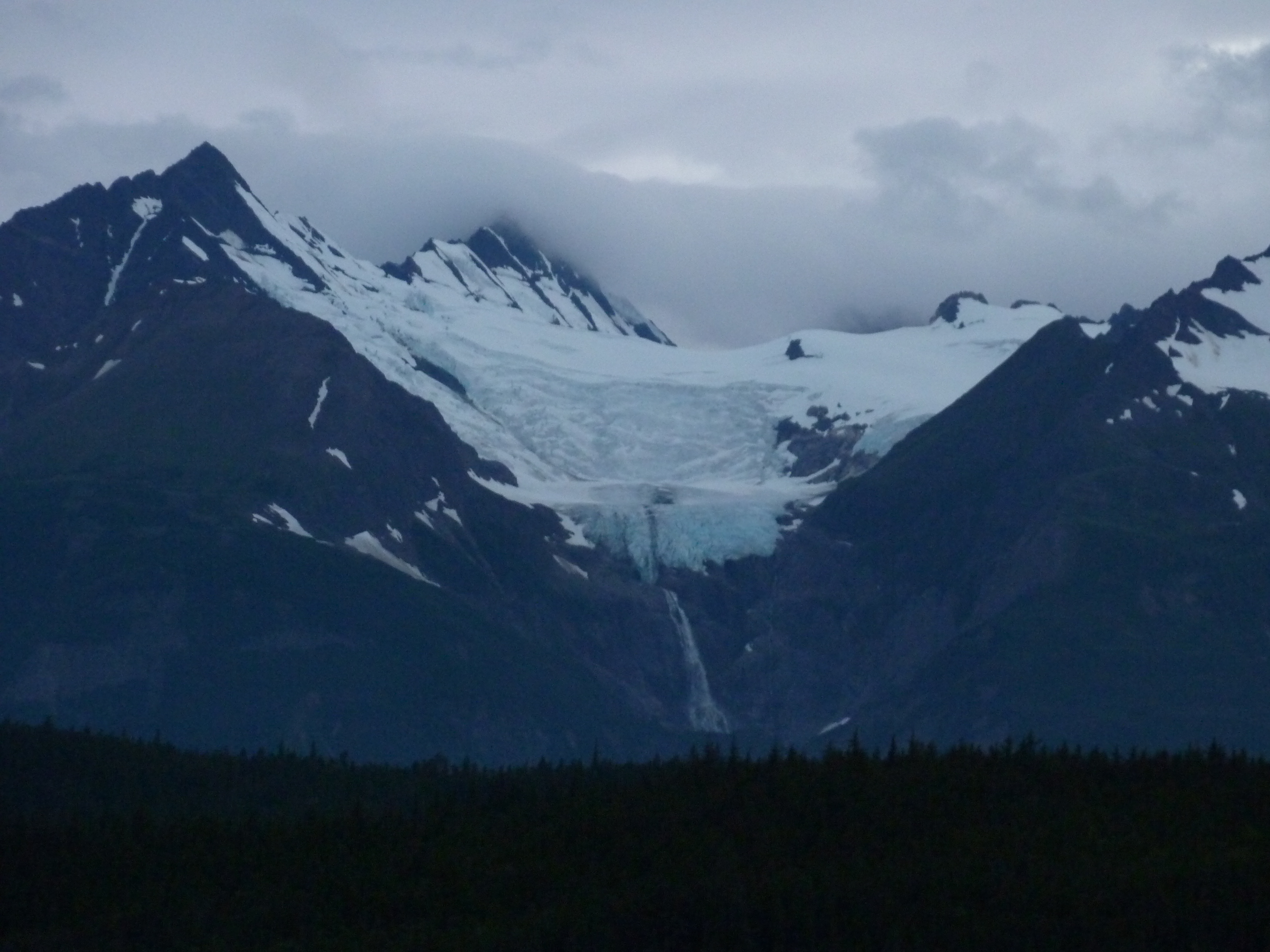 We cruised past this small glacier high in the mountains around 10:00 p.m. It was so beautiful, I had to get up and take this picture. The last time we traversed this channel to the sea, it was afternoon. I spent hours looking through my binoculars while wrapped in a blanket with a good cigar and a glass of Jack Daniels. It was a great experience.

Times have changed. I gave up cigars, rarely drink, and forgot my binoculars. If I didn’t know better I’d think I was getting old. Nah!