The story is serialized in three segments. “Hard Time” was the inspiration for a chapter in A Tale of Robbers and Cops, a historical novel covering fifty years in the lives of two brothers, career criminals, and the men and women in blue who must deal with their crimes.

They weren’t killers by nature. Jim Tucker born, in 1912 to Georgia sharecroppers, was three years older than his brother Ben. His memories of home were of a one-room house, a shack really, where he, his parents, two brothers, and two sisters ate, slept, hated, and grew old prematurely. His family survived on less than $350 a year, half what maintained most American families. They were lucky. They had inside running water. The one place where any privacy could be found was the stinking privy out behind the equally foul-smelling chicken coop.

The landowner refused to do anything to ease their suffering. The walls were of roughhewn planks cracked and decayed to the point they no longer kept out the wind or rain. The Tucker’s waged a constant battle with the elements to keep the place livable. Nailing and repairing the wooden walls, applying tar paper, and sheets of tin seemingly did nothing to solve the problem. Their father succumbed to alcoholism and consumption at the ripe old age of forty as the Great Depression began. He left behind a wife and five children to fend for themselves.

Nine months later, their mother remarried a widower who had four children of his own. With eleven mouths to feed, Jim felt it would be easier for all if he left. Ben went with him. Two days later, they stole their first car—their first step in a life of crime.

The following week, broke, hungry, and with nowhere to sleep, they held up a gas station. Immediately caught, there was no trial. The deputy sheriff who arrested them said, “It’ll go better for you if you plead guilty and get it over.”

The judge who presided over their arraignment did not ask or offer them an attorney. Instead, he said, “Boys, the deputy tells me you want to plead guilty.”

“Did you steal the car?”

“Did you hold up Mr. Smyth’s gas station?”

“It sounds to me like y’all are guilty. How do you plead?”

“Son, you have to plead guilty or not guilty, one or the other.” 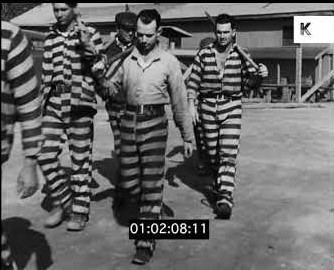 Sentenced to three years on a Georgia Chain Gang, they endured back-breaking work. The labor was difficult enough without the swamp, inhumane guards, and brutal inmates. Still years away from becoming a wildlife refuge, the Okefenokee Swamp covered 400,000 acres of Northern Florida and Southern Georgia. This shallow peat-filled quagmire was home to more than four hundred species of animals, including alligators, venomous snakes, and panthers.

Assigned to lay down a roadway for what was to become Georgia State Route 94, the convicts cleared a swath of land wide enough for a two-lane road into the heart of the swamp. They suffered immensely from the heat and never-ending swarms of insects. The prisoners had no protection from the elements other than the rotting and mildewed tents, the warden and guards referred to as inmate shelter.

The guards fared little better in the hastily erected temporary buildings moved whenever the roadway inched another five miles into the unforgiving swamp. The warden had a decent home in Fargo, miles outside the swamp. An infrequent visitor, he came to inspect the camp once a month to verify the records of new, released, and deceased inmates. If an inmate was unfortunate enough to die after the warden’s monthly visit, his remains were unceremoniously buried in a shallow, unmarked grave.

Guarding the prisoners was an unpleasant task made even more so by the environment: rain, sweltering heat, humidity, insects, snakes, and any number of other unpleasant experiences. The guards endured constant pain and discomfort. They were generous in passing their pain on to the convicts. One guard was often heard repeating, “If I have to put up with this shit, dem fu%#ers are going to suffer even more.”