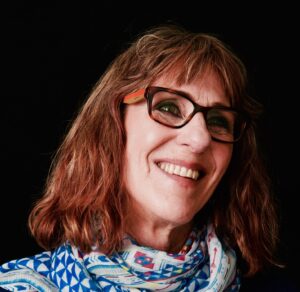 The first in the series was The JadeAnne Stone Mexico Adventures: Set Up—Secrets and Lies in Zihuatanejo.

Good News! Good News! The audiobook is slated to launch this winter.

The second in the series is The Hydra Effect—Revelations and Betrayal in Mexico City.

Number 3, slated for release early in 2021, is Nothing Comes After Z—Death and Retribution in Tepoztlán.

Ana’s books, including her chapbook, Nature Girl, are available on Amazon.

When I asked Ana about her writing and how long she had been working at it, she told me a wonderful story. Here’s part of it.

I write in several genres. I fell in love with poetry during my angst-ridden years of high school. My greatest influence was Ferlinghetti, and I started writing sappy free verse more resembling Rod McKuen than the taught socio-political commentary of Ferlinghetti and the Beats. My first poetry chapbook (2019) is called Nature Girl and explores my relationship with the natural world.

I dabbled in short story writing in university, but I’d always secretly wanted to write the novels I voraciously read. After I had my palm read and was told I’d be a bestseller by the time I was 50 (I was 13 at the time,) I started a couple novels. These languished in boxes under my parent’s house until the mildew and rodents took up residence. In the many years between the prediction and my first published book, soon to be a bestseller, I wrote newsletters, promotional copy, poetry, and journaled about my life.

It was in Mexico on a deserted highway at dusk with the odor of growing marijuana filling the cabin of my VW bus, I started writing in earnest. Nothing like being threatened by flashy jewelry wearing, gun-wielding thugs to incite creativity.

While I wrote my first novel, I also wrote a memoir of living in Mexico, a monthly lifestyle column for a local newspaper, numerous short memoir, short stories, and poems. Many are now published in over a dozen anthologies, papers, and some even on the radio.

It took me 27 years to write and publish Set Up. I chose to indie publish after several encouraging rejections I received from agents and the demoralizing lack of communications whatsoever from most of the rest I queried. Although marketing is a big challenge for me, my entrepreneurial side enjoys being a small press owner!

After this, I had to know where she writes, her style and process, and what she finds the most difficult in completing her work. Recalling that she is also a teacher, I couldn’t skip asking about research.

I’m naturally a pantser. When I started book 1, I knew my protagonist and who was going to die. Everything and everyone else was a surprise. Set Up was a NaNoWriMo book, so I actually wrote the lion’s share during the 2007 contest and “won.” Book 3 is a 2017 NaNoWriMo winner. I used a hybrid method for Hydra, which sped up the writing process, but not enough. Generally, the successful writers I know put out a book or two every year.  For NaNoWriMo 2020 and book 4, I’m learning to outline. I’ll never let go of the in the moment inspiration that comes with pantsing, but a pre-structured plot will save hours of revision.

Travel is the best part of my writing process. I never say no to a trip, not even a virtual one. I research just about everything, keeping Google Search and Dictionary.com open behind my draft while I write. Recently JadeAnne was gazing out the car window while passing a cemetery. Hurray for Google Street View! I was able to describe what she saw and let her muse on the current stats on deaths in Mexico linked to the war on drugs.

Unfortunately, research is my favorite part of the process. I’m able to wile away hours upon hours reading, watching videos, note-taking, and organizing instead of writing. The benefit is, I get my place, plots, and plot twists, even characters, from my research. (I once read a newspaper article about an old lady packing her dead husband into a suitcase. When asked why, she said he’d always wanted to go to Niagara Falls. I won first prize in a contest for the short story.) Although I know my human and canine characters and have experienced much of Mexico, this book will lead JadeAnne to places I haven’t visited. I may have to make a trip across the border for some experience. Smugglers’ tunnels, anyone?

The hardest part of writing is actually getting to the writing. It used to bother me that I’d mosey through the house and yard, finding chores that couldn’t wait—like weeding, ironing, cleaning out the garage. . .but I came to understand that when I finally got to the computer, the words flowed. I named it “composting.” I’ll be raking up my eucalyptus grove of all the “tree trash” blown down in the recent high winds starting on November 1st.

I’m looking out my writing studio window at all that flammable eucalyptus bark now. It’s everywhere, hanging like tinsel from the branches, ornamenting my garden, littering much of the yard. It’s going to be a big job—that outline will really help.

For many of us writers, finding and naming our characters can be a daunting task—it holds true for Ana.

Besides getting butt in the chair, one of my biggest challenges is characterization. I keep a binder of character sketches on a table next to my keyboard. Every character is identified to the extent of their function in the books with their role in the story, a physical description, a personality description, their habits, mannerisms, background, internal and external conflicts, and every random idea I have about them. It turns out JadeAnne is allergic to house dust, loves the fruit, mamey, and has a collection of vintage shooters from her days playing marbles. I make plenty of it up, but I pattern some of my characters from specific people I know. Lura in book 1 is a woman I worked with in a real estate appraising office in the 80s. (Yes, she gave me permission.) And the dog trainer in book 2 in real life wasn’t nearly as horrible as I made him out to be. Others are composites of people I know. The trick is to use the traits or background that serves the story and let the rest go. I follow Anne Lamont’s advice from Bird by Bird on this. Look it up!  However, she did not have advice on how to write notorious cartel members. (In fact, she once asked me why anyone would write “that.”) I’ve grappled with this. Publicly known figures without a specific role, I mention by name. If I’m making one a character, I use narco already dead, or use him for a crime he is in prison for and alter his name. And never answer calls I don’t recognize. Don Winslow received threatening phone calls for his Narco series.

Naming characters is another problem. I look up baby names and last names and associate the name with the character’s personality or origin. JadeAnne Stone is the daughter of a Vietnamese mother and American serviceman father brought to the US in Operation Babylift. Her name was Jade (in Vietnamese) with the suffix -an, which is often added to girl’s names, hence JadeAnne. Anibal was the name of my favorite waiter in Zihua, and Anahí was a typical name from the Mexican working classes in the mid to late 20th century. It all goes back to the question of research.

Thanks for sharing your story with us, now; how can our readers contact you? 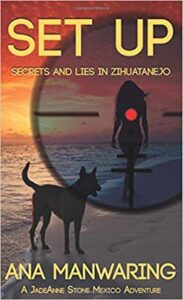 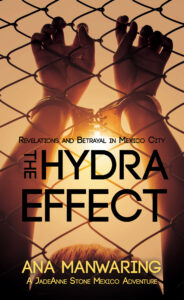