Our Guest Today is Dennis Koller

THE RHYTHM OF EVIL (Book 1 of Reggie Decker Mystery Series)

Thirteen years after a young San Francisco woman was murdered, a Tweet accusing the SFPD of systemic racism and homophobia for dead-ending her case goes viral. Infuriated by the tweet and the public relations 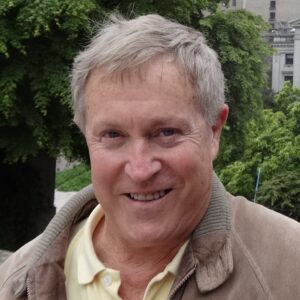 nightmare that follows, SFPD Homicide Inspector Reg Decker receives permission to re-open the case for one week so he can squash the conspiratorial nonsense once and for all. But it’s not that simple! 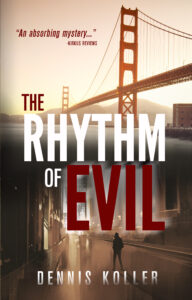 Decker’s initial review reveals that the victim’s Murder Book is awash in unfounded conclusions, false leads, and outright lies. So many that he begins to wonder if the Twitter gossip surrounding the case might be on to something. As new clues to the victim’s life and tragic death emerge, Decker realizes he has stumbled upon a twisted path of teenage sex trafficking, drug cartels, and political intrigue at the highest levels. All having tentacles reaching back into his own Homicide Department.

HOW I GOT INTO WRITING: I taught in both high school and college, so I had the pleasure of being around some incredibly talented people. My interest in writing came to the forefront sometime in the first decade of this century.

I had always been a military history buff, so it was natural for me to get interested in the Vietnam War (even forty or so years later). It was this interest that led me to read the first-hand accounts of the tortures our Prisoners of War suffered at the hands of their North Vietnam jailers. It’s not a chapter of the war that gets/got much attention, so I thought it would be interesting to tell their story.

Since many of their individual stories had already been told in non-fiction accounts (mainly memoirs), I decided to tell their collective story through the fictionalized eyes of two former prisoners. Set in present-day San Francisco, former North Vietnamese Prisoner of War, Tom McGuire, is now a thirty-five-year veteran of SFPD’s Homicide Department. The antagonist, Robert Carlton, also a former Prisoner of War, has decided it’s pay-back time for those Americans who visited North Vietnam during the war. High on his list to be killed is the current Governor of California, an anti-war protestor who visited the North during the war. Even though Tom McGuire was a cellmate with Carlton in North Vietnam and, to a degree, sympathetic to him, he can’t let Carlton kill the Governor. Or can he?

HOW MANY BOOKS HAVE YOU WRITTEN? The Oath took me four years to write and ended up being the catalyst for me to stop going to the office every damn day. I’m now a full-time author and loving every minute of it. I’m also proud to say The Oath won the 2017 Military Writers Society of America’s Silver Medal.

Since finishing The Oath, I’ve penned three other mystery-crime-thriller novels: Kissed By The Snow (2016); The Custer Conspiracy (2018) (which also was awarded the Military Writers Society of America’s Silver Medal in 2020), and The Rhythm of Evil, published in July of 2020.

My fifth mystery-crime novel will be published in the summer of 2021.

HOW DO YOU GO ABOUT THE WRITING PROCESS? I’m embarrassed to say my writing process is I have no writing process. Every day is different, every hour is different, and I blame it on my Muse. She sometimes loves me; sometimes hates me. Sometimes she might wake me up at night by planting a piece of the novel in my mind. She materializes haphazardly, but I’ve learned over the years to always trust her. If she starts feeding me stuff, I immediately get out of bed and go to the desk to write. Drives my wife nuts. Truth be told, it drives me nuts, too.

WHERE DO YOU PLACE YOUR SETTINGS? I always write about what I know. Since I was born and raised in San Francisco, I feel comfortable using it as my background. It’s a great city to be in. Many of my high school and college chums still live here. Many became San Francisco cops and provided me with a treasure trove of knowledge about the department’s inside workings.

DO YOU HAVE SUBPLOTS? I do, but most have to do with the male/female relationship in the story at any particular time. In The Rhythm of Evil, the subplot centers around whether the wife, bringing home a young student she teaches to live with them, can handle the husband’s jealousy who thinks she won’t be putting him first anymore.

ARE YOU TRADITIONALLY PUBLISHED OR INDIE PUBLISHED? I’m indie published, and let me tell you why: First of all, don’t forget it wasn’t but a short time ago that I started to see myself as a “novelist.” I wrote The Oath not because I wanted to make a career out of writing. But because I wanted the American public to know the unbelievable torture that our captured pilots endured in North Vietnam for their country. Getting their story out was going to be the sum total of my writing effort. From the very beginning, my writing career was planned as a “one book and done!”

Even at that, I knew I needed an agent to get published mainstream. Shouldn’t be too hard, I said to myself. Everyone is simply going to love The Oath. So, I got myself a list of literary agents and penned them all a letter. Within two weeks, I got a reply from an agent who wanted to sign me. I’m thinking it’s all over now, baby blue. I’m on my way to the BIG time.

My agent had me sign a six-month contract, and I sent him my manuscript. I found myself running out to the mailbox two or three times a day looking for that contract from William Morris or Folio Literary or Trident Media. I just knew it was on its way.

But I wait. And wait. And wait. After three months of waiting, I figured something must be wrong. My agent will know, so I call him.  He tells me, “Be patient. It’ll all come together.” I’m in no mood to be patient. I tell him, “Go to hell. I haven’t got the time.” And that was it for me. I found a small press, Pen Books, who very smoothly and successfully publish all my novels.

DO YOU HAVE ANY ADVICE FOR READERS? A book takes a person on a journey at a time when travel is otherwise restricted. It expands the reader’s world and life experiences. Call your local bookstore or go to Amazon.com and order books for your friends, family members, employees, and clients.