You’ll recall that old saying, a rolling stone gathers no moss. Well, last year was indeed a busy one for me. With the COVID-19 virus confusion canceling the college classes that I teach, as well as the PSWA Conference for which I’m the program director, I found myself with more time to write. I managed to produce five novels and a couple of short stories. One of the novels was a western, which I wrote under my A.W. Hart pseudonym (Gunslinger: Killer’s Ghost), but the other four were under my own name and introduced a whole new series that I’m very excited about.

The first novel in my new Trackdown series, Devil’s Dance, debuted on November 15th from Wolfpack publishing. It begins the saga about former Army 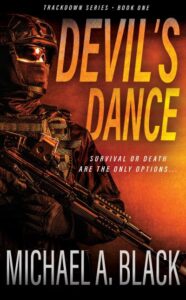 Ranger, Steve Wolf, who’s wrongly convicted of a war crime in the waning days of the Iraq war. Unbeknownst to Wolf, he is actually caught up in an elaborate scheme perpetrated by a very rich and eccentric man who will stop at nothing to obtain an ancient artifact stolen from the Iraqi National Museum of Art. Upon his release from a four-year prison term, Wolf is approached by his mentor, ex-green beret Jim McNamara, who convinces Wolf to join him in the business of Bail Bond Enforcement.

Based in Phoenix, Arizona, where McNamara and his daughter operate Trackdown, Incorporated out of their house in Phoenix, Arizona, Wolf reluctantly agrees to join Mac. The pair cross paths with some undesirable characters as they head down south of the border to apprehend a wanted fugitive. Unbeknownst to Wolf, his old enemies from Iraq, a PMC called the Vipers are also in Mexico on the trail of the same fugitive, who is in possession of the priceless stolen artifact being sought by the very rich and unscrupulous man. The trail leads them all to El Meco, the abandoned Mayan ruins. Wolf finds himself suddenly battling alone against a small army of vicious foes in a conflict where the only outcome is either survival or death. 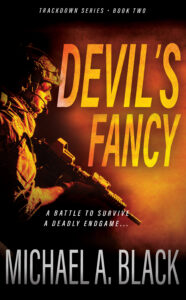 Trackdown #2, Devil’s Fancy, came out on December 15th and continued the saga of Wolf and McNamara as they try to fit the pieces of this developing puzzle together and suddenly find themselves in the crosshairs of a highly professional and extremely deadly squad of mercenaries who give no quarter. Dodging more bullets than he did in a combat zone, Wolf must overcome the stacked odds against him if he is to survive this deadly endgame.

Next up was Trackdown #3, Devil’s Brigade, which was released on January 15th. This one finds our heroes being badgered by the FBI over the incident that occurred in Mexico, as well as a shootout involving federal agents in Devil’s Fancy. A lucrative bounty takes Wolf and Mac to a lawless encampment inside a large city in the Pacific Northwest. However, the same powerful, rich man who set Wolf up years ago is still shadowing him, hoping to gain possession of a priceless artifact that is now in Wolf’s unknowing possession. To accomplish this end, the sinister rich man employs another professional killer. A former CIA fixer who is set to come at Wolf with unrelenting efficiency. Just when it seems things couldn’t get worse, Wolf and McNamara must unexpectedly rescue Mac’s grandson, who has been taken to a militia compound and held hostage. Facing CIA killers, crazed militia forces, and overwhelming odds, Wolf once again finds himself outnumbered and outgunned in a brutal showdown where a young child’s life hangs in the balance.

These three lead to a finale of sorts in Trackdown #4, Devil’s Advocate, which came out on February 15th. When a possible path for Wolf to clear his name materializes, he jumps at the chance. However, he’s still being stalked by the shadow-like foes who are being funded by the same rich sociopath who set Wolf up for the false charges back in Iraq. Wolf and McNamara find themselves facing a brutal gang of ruthless bikers as well as the group of highly proficient CIA-trained killers. This time their quest ultimately takes them to Belize, where they discover an ultimate betrayal and finally come face-to-face with the man behind it all. With the odds stacked against him once again, Wolf finds himself in a desperate struggle to save an innocent life, but will it cost him his last chance at redemption? You’ll have to wait until February to find out.

Right now, I’m not sure if the Trackdown series will continue. Like any new venture, a lot will depend on the sales. Like the first season of a new TV series, the four books described above do offer completion of the original story arc. Or do they? I’m being a bit coy about this because I am awaiting a contract for a fifth book in the series as I write this, and have an idea about how I’d like the saga of Steve Wolf to continue. I’ve also been contacted about finishing off the Gunslinger series under the A.W. Hart moniker and have three new short stories set to come out in various magazines. And then, of course, I’m hopeful that once this COVID-19 thing is firmly in our rearview mirrors, we’ll be able to move ahead with the PSWA Conference in July. 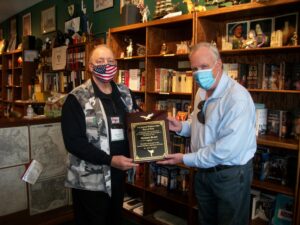 Another milestone for me was being inducted into the Illinois Martial Arts Hall of Fame. Although the virus KOed the pageantry of being presented with the plaque at the formal dinner, it was presented to me at one of the limited, socially distanced book signings I was able to host in November. Through all of last year’s ups and downs, I tried to remain positive and continued to be thankful for all my good friends, one of whom is George Cramer, who once again invited me to be on his blog. Thanks, George, and let’s all look forward to doing a lot of writing in the coming year. Thanks for tuning in.