I’m a graduate of the Institute of American Indian Arts, Santa Fe, New Mexico, where I’m taking a continuing education course entitled Indigenous Literature. In our last assignment, I read Linda Legarde Grover’s poem “Everything You Need to Know in Life You’ll Learn in Boarding school.”  It hit me like a sledgehammer driving a spike into a railroad tie. After my comments, I’ve included Ms. Grover’s work in its original format and full length.

For most of my life, I knew little of my heritage other than there was German on my mother and father’s sides of the family. The little I knew of my indigenous heritage came from my father. He was born and raised in Siskiyou County before his father died. Twelve years old, he had to quit school and get a job. Dad was Indian on his mother’s side—he looked it—a member of the Karuk Tribe of California.

Applying for a job, the supervisor said, “Kid, you look like an Indian. Are you one? I don’t hire no Indians.” He responded that he was white. He got the job. He remained white and assimilated for several decades. If you think that’s bad, sad, whatever, his story was nothing compared to the U.S. and Canadian governments’ programs that forcibly removed indigenous children from their families and placed them in boarding schools.

The children’s hair was cut to white-man standards. They were beaten if they spoke their native language; English was the only language allowed. The boys 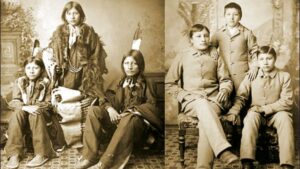 were taught farming and the girls how to be domestic helpers. These schools were in existence from the 1880s through the 1930s—some vestige remained until 1978. An 1893 court ruling kept Indian children in boarding schools until 1978. With the passing of the Indian Child Welfare Act, parents gained the right to deny their children’s placement in off-reservation schools. The photos are of three indigenous boys before and after arrival at a boarding school.

These boarding schools—reeducation camps—were worse than the internment camps of World War II in the treatment of the confined.

Here’s what Army officer Richard Pratt, founder of the first federal Indian boarding school, Carlisle Indian Industrial School, said in a speech in 1892 when he summarized the government’s philosophy as “kill the Indian…save the man.”
The United States’ official policy was to eradicate Indigenous culture by forcibly separating Native children from their parents and making them white on the inside and easier to eliminate. 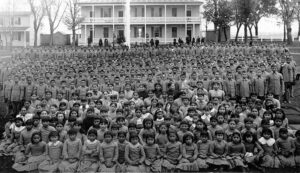 Speak English. Forget the language of your grandparents. It is
dead. Forget their teachings. They are ignorant and unGodly.
Cleanliness is next to Godliness. Indians are not clean. We will
teach you to be clean. You will never amount to anything. Stand in
line. You will practice proper hygiene. This is a toothbrush.
Hang it on the hook next to the others. Do not allow the bristles
to touch. This spreads the disease that you bring to school
from your families. Make your bed with mitered corners. A
bed not properly made will be torn apart. Start over. The boarding
school feeds and clothes you. Remember and be grateful.
Say grace before meals. In English. Don’t cry. Crying never
solved anything. Write home once every month. In English.
Tell your mother that you are doing very well. You’ll never
amount to anything. Answer when the teacher addresses you.
In English. We do not recommend visits to your family. If you
visit your family in the summer, report to the matron’s office
immediately upon your return. You will be allowed into the
dormitory after you have been sanitized and de-loused. Busy
hands are happy hands. Keep yourself occupied. You’ll never
amount to anything. Books are our friends. Reading is your key
to the world. In English. Forget the language of your grandparents.
It is dead. We forbid you to speak it. If you are heard
speaking it you will kneel on a navy bean for one hour. Don’t
cry. Crying never solved anything. We will ask if you have
learned your lesson. You will answer. In English. Spare the
rod and spoil the child. We will not spare the rod. We will
cut your hair. We will shame you. We will lock you in the
basement. Learn from that. Remember and be grateful.
Speak English. You’ll never amount to anything. 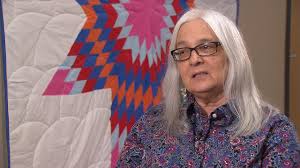 Linda LeGarde Grover is an Anishinaabe novelist and short story writer. An enrolled member of the Bois Forte Band of the Minnesota Chippewa Tribe, she is a professor of American Indian Studies at the University of Minnesota Duluth.