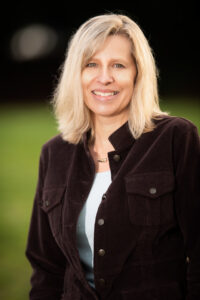 Mary Keliikoa is the author of the Lefty, Agatha, and Anthony award-nominated PI Kelly Pruett mystery series and the upcoming Misty Pines mystery series featuring Sheriff Jax Turner slated for release in September 2022. Her short stories have appeared in Woman’s World and in the anthology Peace, Love and Crime: Crime Fiction Inspired by Music of the ’60s. A Pacific NW native, she spent a part of her life working around lawyers. Combining her love of legal and books, she creates a twisting mystery where justice prevails.

When not in Washington, you can find Mary on the beach in Hawaii, where she and her husband recharge. But even under the palm trees and blazing sun, she’s plotting her next murder—novel, that is.

Thank you so much for having me on your blog today, George! I’m delighted to be here. I came to writing in my late twenties and penned four novels by the age of 35. It was about that time that my husband and I opened a natural pet store and a distribution company, where all of my creative energies went for the next 15 years! I tucked away that last book I wrote in 1999 and set out to grow and run those businesses.

Fast forward, 2016, I’d turned 50, and we sold part of our company. Suddenly, I had time and energy to go back to that last book I’d written. I pulled it out and found that it wasn’t horrible, but it sure needed work—and updating. That last book I’d written was DERAILED, which is the first book in my series. When written, social media wasn’t a thing, and cell phones weren’t as savvy for taking photos and searching the web. 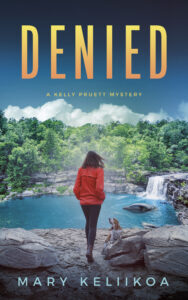 After many drafts and being involved in a mentoring program, I got my agent in 2017. The book deal came in 2018 and DERAILED published in 2020. It’s been racking up some nominations for best first novel, and today, I’m excited to say that BOOK 2, DENIED, just released.

When I’m not writing, I love to travel. Because my husband is Hawaiian and his family lives on the Big Island, we have a home there and get to visit quite often. But several years ago, the international travel bug bit us. Exploring other people’s cultures and meeting new friends has been the best part. And of course, as a mystery writer, I can’t go anywhere without wondering if I couldn’t set a story in that place or where to hide the body!
Do you write in more than one genre? I don’t write in any other genre than mystery and suspense. That is the genre that I love to read, and I can’t imagine anything else. I spent 18 years in the legal field, and I’ve always been drawn to that world and how it works. If I could volunteer to be on a jury, just to have a birdseye view on a regular basis, I would! I find it so intriguing. In mystery, I get to explore not only motivations and the crime but the way people tick and their thoughts and processes. The psychology of it is fascinating.

Tell us about your writing process: I’m a creature of routine. I put in 2-4 hours of writing, five days a week. I find that showing up at the same time each morning signals to my brain that it’s time to work. I aim for 2000 words a day, but I don’t worry if I don’t get there. Some days the story flows easier than others. One day I might manage 1000, but another day I cruise past 3500. At the end of the week, though, I’ve usually met my goal. And while editing doesn’t require the same word count, I still put in the time regularly.

What are you currently working on? With Book 3 already in the publisher’s hands and approved, I’m working on a standalone that could have some series potential. It features a paralegal, something I know quite a bit about, who is forced out of her workaholic comfort zone when her boss is murdered, and her sister goes missing,. The two events appear inextricably linked.

Do you have subplots? If so, how do you weave them into the novel’s arc? I do have subplots, and I think they’re so important to the story! They also have to tie into the main story to be effective. For me, I use family and the obstacles they can pose as a subplot quite often. In DENIED, a subplot is Kelly and her ex-mother-in-law. They are at odds on many occasions, but their history and Kelly’s daughter binds them. I also have Kelly’s ex-husband with his own subplot. But it still ties back to their love of their daughter and how that affects Kelly’s choices as a private investigator.

How do you raise the stakes for your protagonist—for the antagonist? I’m always asking myself what can they lose or what do they feel they might lose in this scene—respect, their life, their ability to succeed. It doesn’t have to be huge, but there has to be the threat of something either physically or psychologically in play that means a lot to the character. If the character is invested in the outcome of the conversation or the action, then the reader will be as well. And I’m constantly turning the screw to make it harder on my characters. Of course, they get to save themselves near the end, but until then, I’m making them sweat! The fun part of writing for me is making life difficult but rewarding for all involved when the story is resolved.

Do you base any of your characters on real people? I would say that I am influenced by real people, but I never create a character that is specifically one person. I pull different pieces from many people I’ve met or known in various situations, and create a composite. Having worked in retail, and in law, I definitely have had a view of many different personality types, and that has been a gold mine when I create characters.

Looking to the future, what’s in store for you? Book 3, DECEIVED, has been approved at this point and will be published in May 2022! That will be the end of this part of the series of Kelly Pruett. But that’s not to say I won’t come back to her later. However, I have signed a two-book deal with Level Best Books. Book 1, HIDDEN PIECES, will be out September 2022 and features a small-town sheriff, Jax Turner, set in Misty Pines on the Oregon Coast. Of course, I have the second book in that series to write, and I don’t see myself slowing down any time soon!

Do you have any advice for new writers? My advice for any new writer is just to keep writing what you love, continue to hone your craft either by taking classes or finding a group of other writers you can bounce ideas off of and find your community. The best part of writing for me has been enjoying getting to know so many other mystery writers. Whether it’s that we support each other by critiquing each other’s books, or just boost each other on social media, or just boost each other on those days when we feel like we don’t know how to write (and even after having written nearly eight books now, I still have those days), it’s important to have people to lean on.