Civil unrest and murder. Can a Roman patrician quell unrest and find a killer before politicians knife him in the back? 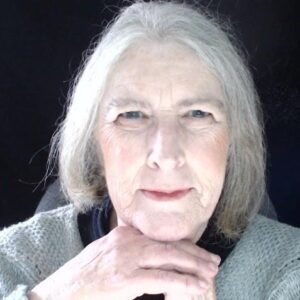 A mystery fan and history buff since childhood, Zara fell in love with Italy in one brief visit and keeps returning. She lives near Portland, Oregon.

The Argolicus Mysteries is an ongoing series: The Roman Heir, The Used Virgin, The Vellum Scribe, The Peach Widow, and her latest book The Grain Merchant.

Italy, 512 C.E. Argolicus would rather bury his nose in a book. But, when he leaves his peaceful country villa to open his long-shuttered town home, he dives into town politics and meets a potential bride. He refuses to stand by when her family’s livelihood is threatened and her merchant father slain.

With the grain supply dwindling and Argolicus fighting incompetent officials, he uncovers a list of high-placed suspects and attracts the attention of a shadowy rival bent on his destruction. And as the citizenry grows increasingly desperate to put food on their plates, he’ll have to risk his reputation and life to hunt down the killer before violence erupts.

Can Argolicus find a hidden killer before he takes a knife in his back? 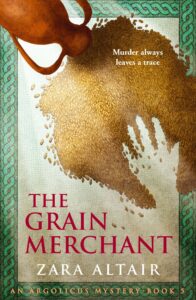 Read The Grain Merchant—explore the streets of antiquity today!

What brought you to writing? I’ve been writing since I was five, but this series started with a phone conversation. My daughter was telling me how I would like Ravenna as a place to visit. She went on to talk about Theoderic The Great, crossing the Danube, winning Ravenna. I wondered what it was like to live then. And so it began.

What is the most challenging part of your writing process? Bringing late Roman culture to life without long narrative passages. Religion and politics were intertwined. I try to keep it simple; otherwise, there would be long dissertations on the natures of Christ. To integrate the history, I focus on the characters’ sensory responses to the world around them. What they see and experience is what the reader sees.

Religion and politics were intertwined, but I keep it on the experiential level because otherwise, the reader could go down a rabbit hole and never return. Just look at all the sects, heresies, and schisms in the Late Roman period.

What are you currently working on? The next Argolicus mystery, The Olive Wife.

Has an association membership helped you or your writing? I’ve made friends in the Pacific Northwest Writers group of 20 Books to 50K organization. It’s the friendliest, most supportive group I’ve been in over the past 40 years of writing. People share information, struggles, and wins, but they also help with specifics. I found my current editor and new cover designer through this group.

Who’s your favorite author? I’ve been reading for a lifetime. That question is almost impossible to answer with one name. Fyodor Dostoyevsky, Umberto Eco, Amor Towles all come to mind. I am a fan of Philip Kerr and especially like the Bernie Gunther series. Robert Harris’s Fatherland and Pompeii are two favorites. Jo Nesbø is a fabulous storyteller. He ratchets up the tension. Tana French goes deep into characters and yet keeps the final twist hidden.

How do you come up with character names? Some names are straight from history, like Argolicus and Governor Venantius. Argolicus was a real person at the time of Theoderic’s reign in Italy. He is mentioned nine times in Cassiodorus’ Variae as praefectus urbis of Rome. His childhood and ongoing friendship with Cassiodorus come from my imagination. Venantius is chastised in the Variae for his lack of care for the people he governs. Many character names come from People and identity in Ostrogothic Italy, 489-554. The introduction is also rich with cultural details. I research Greek, African, and Syrian names for other characters.

Do you have subplots? If so, how do you weave them into the novel’s arc? The Grain Merchant has two subplots. One is about friendship and love. The other is about the internecine workings of politics as it pertains to a local grain shortage. When I’m writing, I don’t think of subplots as separate stories but extensions of themes. They grow organically from what pushes the protagonist. What weaknesses or perceived shortcomings will grow out of a situation?

Do you outline, or are you a pantser? Before I plan the story, I cast the characters. I have a basic outline with major plot points before I start writing. That said, as I write, characters do and say things I hadn’t imagined in the planning stage. I keep those surprises in check by focusing on the next story point. For example, at the first major pinch point, a character may do something unexpected. Then I think about how that will help me get to the next big point in the story, the midpoint. So there is discovery as I write, but I work it into the story framework.

What kind of research do you do? A lot. First was the background research. I knew nothing about the period when I first started. Books, articles, Academia.edu. I went to Italy and interviewed several history professors who pointed me toward private libraries and gave me 32 kilos of books. Then, for each story, I end up doing specific research. For The Peach Widow, I looked into inheritance law. For The Vellum Scribe, I focused on theological and church tradition differences between Trinitarian and Arian churches. For The Grain Merchant, I researched civil structure. And, I research and prepare food, so I know what my characters are eating. Because this is a specific time in Italian history, much of the research is written in Italian.

What obstacles do you face when writing about historical figures? The most challenging for me is getting them to act and respond in a way that represents the time. For example, Argolicus’ sidekick is his slave tutor. He’s his best friend but a slave. It’s hard for me to take slavery as a given, so I have to reach to know the attitudes of both those characters.

Do you have any advice for new writers? Write. Along the way, develop your craft. Keep writing.

Find the books at all major online retailers.