JOSEPH BADAL -• Named One of 50 Authors You Should Be Reading

My latest novel, The Carnevale Conspiracy, was released on July 20, 2021. This is my 17th published suspense novel. My next release won’t be out until early in 2022.

Please give us a short pitch. “Bob and Liz Danforth are on the vacation of a lifetime-Venice, Italy during Carnevale. But, when they are caught up in the diabolical actions of a secret organization, patterned after the 11th Century’s Hashashiyan, or Order of Assassins, their trip becomes a nightmare of herculean proportion.”

Evil Deeds is one of my early novels. It was based on the actual kidnapping of our 2-1/2-year-old son in Greece when I served there with the U.S. Army. Evil Deeds is the first of 7 books in my Danforth Saga. Here’s what N.Y. Times Best-Selling Author Sheldon Siegel wrote about this novel: “Another tightly plotted, deftly executed page-turner from a master of suspense and international intrigue. Joseph Badal writes timely stories with authority and compassion. Highly recommended.”

What brought you to writing?: Our family has had a tradition of passing stories down from generation to generation. That tradition, along with an insatiable 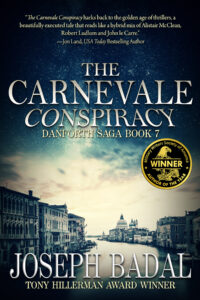 appetite for reading, combined to make me want to be a writer from an early age. But I was diverted from a writing career and spent most of my adult years either in the military or in the banking/finance industries. I finally got serious about writing in my late fifties and had my first novel published in 2003.

What are you currently working on? My current project in the 4th book in my Lassiter/Martinez Case Files series features two female detectives in Albuquerque, New Mexico. Barbara Lassiter and Susan Martinez have been described as the best female detective duo since the Cagney & Lacey television series. Barbara and Susan are smart, courageous, and professional. They aren’t superheroes but rather are real life protagonists who have to balance careers, personal relationships, and personal problems while confronting believable villains, bureaucrats, and power brokers.

Has an association membership helped you or your writing?: When I decided to get serious about writing a novel, I joined Southwest Writers Workshop in Albuquerque. This was one of the best decisions I have made regarding furthering my writing career. The classes and conferences sponsored by SWW and the friends I made in that organization have contributed mightily to honing my craft and advancing my career.

Who’s your favorite author?: I can’t even begin to answer this question with one name. It’s a bit like asking, “Which of your children do you love the most?” If you will allow me to, I would like to list a few of my favorites: Michael Connelly, Robert Ludlum, Elmore Leonard, Tony Hillerman, James Lee Burke, Steven Pressfield, Steve Brewer, Donald Westlake, David Morrell, Doug Preston, James Clavell, etc. I’ve learned at least one thing about writing from each of these writers which have made a large difference in my career.

How long did it take you to write your first book?: My first published book, The Pythagorean Solution, fermented in my brain for a good thirty years. When I finally sat down and wrote the story, I felt overwhelmed with passion and was driven to complete the work. I finished the first draft in three months. But then the hard work began. I worked with an editor who was demanding and critical. It took three years for me to “get it.” The book was published in 2003. Thanks to the help I received from that editor, The Pythagorean Solution was optioned by a movie production company in 2003.

We hear of strong-willed characters. Do yours behave, or do they run the show?: When I began writing, I was under the false impression that all I needed was a good plot. I quickly was disabused of that thinking. I learned that characters really drive a story. In a sense, the characters do drive the story. But it’s not as though they are anarchical. They still have to answer to me. I love creating irreverent, sometimes diabolical characters, but I always put a governor on them so that they don’t get out of control. If a character truly misbehaves, I always have the option of killing them off.

What’s the most challenging thing about writing characters from the opposite sex?: Although I always include strong female characters in my books, my first stories had male protagonists. When I decided to write my first Lassiter/Martinez Case Files book, Borderline, I was confronted with a problem. I realized that female protagonists needed to be more complex. Being married, I should have come to that conclusion early on. Now that I am deep into my 4th book in that series, I find myself challenged and thrilled to write female protagonists.

Do you have subplots? If so, how do you weave them into the novel’s arc?: I don’t outline. I am a pantser, so I never quite know where my plot is heading. My books are replete with subplots which seem to appear in my head during the writing process and, at that moment, appear too attractive to ignore. I believe that these subplots are what add depth and breadth to a story.

What kind of research do you do?: I do extensive research for all of my books. In some of my international thrillers, technology becomes important, which requires me to do research via interviews with experts or on the internet. In books like Death Ship, The Nostradamus Secret, and The Carnevale Conspiracy, where much of the stories are located overseas, I travel to those locations as much as possible to ensure accuracy of sites, customs, etc. Since I was in the military, weaponry has changed dramatically. Again, I interview experts and rely on the internet to keep current.

Do you have any advice for new writers?: I frequently speak to writers groups. The advice I give aspiring authors is, first, put your story on paper. Don’t worry about how good or bad it is. Just put your butt in a chair and write. And don’t use the excuse that “I don’t have the time to write.” If you’re passionate about something, you’ll always find the time. I also tell aspiring authors to not fall in love with their work. Pick it apart, critique it, edit it, then edit it again and again.

Anything else you’d like to tell us about yourself and your books?: I am the luckiest guy in the world. I am doing what I always wanted to do. I am passionate about writing, and I still get a thrill when I see one of my titles in a store. Writing is hard work, but it’s worth every second I put into it.

F. M. Meredith, aka Marilyn Meredith, is the author of over 40 published books. 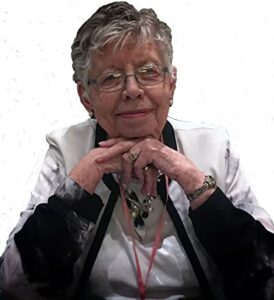 Marilyn enjoys writing about police officers and their families and how and what happens on the job affects the family and vice versa. Having several members of her own family involved in law enforcement, as well as many friends, she’s witnessed some of this first-hand.

The Trash Harem is number 19 in the Deputy Tempe Crabtree mystery series. The official blurb is: “Deputy 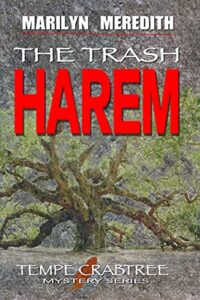 Tempe Crabtree had retired from her job in Bear Creek when friends, who once lived in Bear Creek and attended Pastor Hutch’s church, ask her to visit them in Temecula. The husband, Jonathan, is a suspect in what might be a murder case. The retirement community includes many interesting characters, any of whom might have had a better motive than Jonathan. There is also a connection to Earle Stanley Gardner as well as the Pechanga Old Oak. What is a trash harem? You’ll have to read the book to find out.”

Do you write in more than one genre? For many years, I’ve been writing mysteries, the Tempe series, and the Rocky Bluff P.D. series; however, I’ve written historical family sagas, horror, and even a cookbook in the past.

What brought you to writing? I’ve written my whole life in one manner or another. However, I didn’t get published until I was already a grandmother. I have kept on going and going, like the Energizer bunny.

Where do you write? What, if any, distractions do you allow? I do the majority of my writing in my office. Fortunately, I am not bothered by distractions—and I have plenty, my retired husband, who often sits down to chat, and my three young great-granddaughters, who, with their parents, share our home. I enjoy all their visits.

Tell us about your writing process: I honestly thought I was done with this series when I wrote the one before this called End of the Trail. Deputy Tempe Crabtree decided to retire, and my idea was to retire the series too. However, I visited my daughter and her husband, who live in a gated community for folks 55 and older. While I was there, the ideas began pouring in for another book. By the time I got home, I began jotting down notes, coming up with characters, and forming the plot. As I usually do, I figured out who my victim would be, all the people who might have wanted her dead, and I began writing. I’m not a true plotter, I start writing and it all begins to reveal itself as I write.

What is the most challenging part of your writing process? Once I’m done, going over the manuscript trying to get rid of typos and other mistakes. This time I had a first reader who found several things. I went over it myself many times, as did my editor, and when the first books were published, one of my readers let me know about two mistakes. They are now fixed, but it’s always so frustrating.

What are you currently working on? I’ve begun a new Rocky Bluff P.D., and I’m anxious to get on with it, but I have a long list of things that have to be done first.

Has an association membership helped you or your writing? I can’t praise belonging to the Public Safety Writers Association enough. I’ve been a member for a long time, and those with law enforcement backgrounds have been very helpful with all my questions.

Who’s your favorite author? I have lots, but one of my favorites is William Kent Krueger, who also writes a series with a Native American protagonist. Still, my favorite of his books is Ordinary Grace, a stand-alone mystery with a young boy as the hero.

How do you come up with character names? For this book, the names seemed to just pop up and fit the characters. I do keep lists of interesting names, and I’ve found some great ones in graduation programs by mixing up first and last names.

Do you ever kill a popular character? I’ve never done it and probably never will. Killed a lot of bad guys, though.

Do you base any of your characters on real people? In The Trash Harem, one of the major characters is based on my son-in-law. The central thread of the story and the title came from something he does on a regular basis. And as I was writing, I sort of described him. However, he’s the only one, though I’ve borrowed how some people I know look and some of their personalities, but not so anyone would recognize themselves.

Anything else you’d like to tell us about yourself and your books? I’ve published over 40 books. At this point in my life, not sure how many more I have in me. I belong to two chapters of Sisters in Crime, and of course, PSWA. Over the years, I’ve appeared at many writers’ conferences and taught a lot of classes.

I love hearing from readers, and I guess the best way would be to contact me through FaceBook: https://www.facebook.com/marilyn.meredith
My webpage is: http://fictionforyou.com/
My Blog: https://marilynmeredith.blogspot.com