Nothing Left to Prove is a gut-wrenchingly honest story of one cop’s career and his unique insights battling PTSD and being forced to leave the profession he loved. 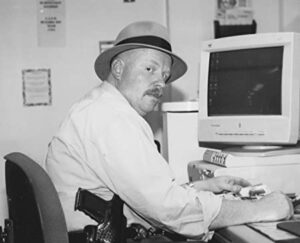 Danny R. Smith spent 21 years with the Los Angeles County Sheriff’s Department, the last seven as a homicide detective. He now lives in Idaho, where he works as a private investigator and consultant. He is blessed with a beautiful family and surrounded by an assortment of furry critters whom he counts among his friends.

Danny is the author of the Dickie Floyd Detective Novel series, the Rich Farris Detective series, and his law enforcement memoir, Nothing Left to Prove. He writes about true crime and other topics in his blog, The Murder Memo.

He has appeared as an expert on numerous podcasts and shows, including True Crime Daily and the STARZ channel’s WRONG MAN series. He is the host of Unsolved Murders with Danny Smith on the Dr. Carlos Crime Network podcast.

Please tell us about your current book and any comments about any other of your books: Nothing Left to Prove is my latest penning and the first nonfiction 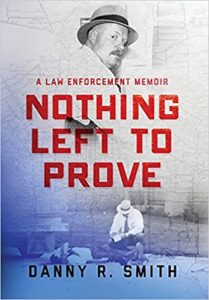 I have written. Previously, I’ve only published detective novels. I have two series: The Dickie Floyd Detective series and a spinoff of it named for the new lead character, the Rich Farris Detective series.

Do you write in more than one genre? Technically I write in two genres, true crime, and crime fiction.

What brought you to writing? My shrink. I had no notion of writing before a psychiatrist suggested that it would be therapeutic for me. Before meeting with him, I was asked to complete a questionnaire that would help him evaluate my mental health as it related to my ability to continue working as a homicide detective. It was immediately clear that there was no way to answer the form questions in the space provided, so I wrote across the form, “SEE ATTACHMENT.” I went to work on my computer, explaining in detail to this counselor just what it was about my job that had turned me into a banana. After reviewing my fourteen-page type-written response, Doc looked at me and said, “You should write for a living. Honestly.”

Where do you write? What, if any, distractions do you allow? When my younger daughter married and ran away with an Army captain (with our blessings, of course), I converted her bedroom with a wonderful view of our property and neighbor’s farmland into an office—perhaps finished and moved in before the newlyweds reached Fort Hood, Texas—and that is where I spend much of my time pondering and writing, writing and pondering. I also waste more time than I should on social media. (That’s a confession. There are many more in my memoir.)

Tell us about your writing process: Most have heard the terms “plotters” and “pantsers” used to describe the two most common styles of writing prose. The first is done by plotting out the book in its entirety before starting a manuscript; the latter is a fly-by-the-seat-of-your-pants method, and that is what I do. I begin with a general idea, and I start writing. When I am on a roll, it flows nicely. Other times, I get stuck in a rut and have to walk away. The best part about being a pantser is that I’m as surprised as my readers about what happens in my books.

What are you currently working on? Now that my memoir is published, I’m back to writing fiction. I’ve started working on book 7 for the Dickie Floyd novels, which will be a pleasant surprise to my fans. (I had said after book 6 that it was the last for that series, and many of my readers were unhappy about it.)

Who’s your favorite author? Currently, Dennis Lehane. I love his style of writing, and all of his novels are phenomenal. Longtime favorites include Elmore Leonard and Joseph Wambaugh.

What’s the most challenging thing about writing characters from the opposite sex? There are just some things a guy doesn’t know or understand about women. Okay, back that up—we know very little about them! However, I married a fabulous one, raised two beautiful, confident, and smart daughters, and I have worked with some terrific female cops. So, in the same way, I have survived nearly thirty years of marriage. I have one secret about writing women characters: ask one or more of them to help you understand what makes them tick.

Do your protagonists ever disappoint you? Honestly, Dickie and Floyd drive me crazy, one wound too tightly, the other more worried about having fun that you’re amazed every time he comes alive in the dead-serious moments that matter most. But you have to read the series to know which is which.

Do you base any of your characters on real people? I do. Many of my cop characters are loosely based on people I’ve worked with over the years. The reason is quite simple—nobody can invent more interesting characters than the men and women with whom I was privileged to serve.

What kind of research do you do? Fortunately, most of my work falls under the often advised “write what you know” classification. In the third Dickie Floyd novel, Echo Killers, my antagonists are former soldiers from Fort Hood. I came up with the idea while touring the army base while I was in Texas visiting my daughter and son-in-law, so as I wrote the book, I had a direct source for technical information. I also had my son-in-law beta read that book to be certain I hadn’t screwed anything up.

Where do you place your settings—real or fictional locations? My settings are predominately Los Angeles, and I use a lot of real locations to give people that L.A. feel.

Looking to the future, what’s in store for you? I’ll continue writing crime fiction, but I also plan to write a few true crime books from some of the cases I handled as a homicide detective: a Native American burned alive by skinheads; a seamstress murdered by her evil daughter, who had also murdered her first husband. Both of those will make very compelling true crime reads.

Do you have any advice for new writers? Study your craft and hone your skills. I have eight books published now, and I learn with each effort. More than anything else, though, write.