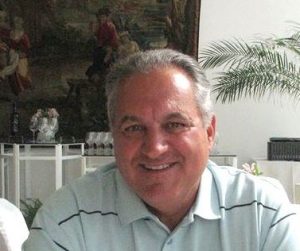 John Schembra spent a year with the 557th MP Company in Vietnam in 1970. His time as a combat M.P. provided the basis of his first book M.P., A Novel of Vietnam.

After returning from Vietnam, he became a police officer with the Pleasant Hill Police Department, retiring as a Sergeant after nearly 30 years of service.

John has six other published novels in the mystery/thriller genre. One mystery, Sin Eater, has supernatural undertones. His latest book, The List, won the 1st place award in the Public Safety Writers Association 2021 writing competition. John has earned nine writing competition awards. You can find out more about him and his books and read their first chapters, plus a couple of short stories at his website; www.jschembra.com. John can be reached at his email; toto@pacbell.net.

What brought you to writing? I’ve been an avid reader ever since I was a little boy (thanks to my mother) and have admired authors who could weave a story that 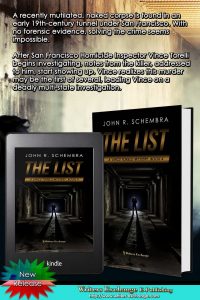 made me feel I was there, inside their words. While with the police department, I wrote several trade articles on police procedures but didn’t get into fiction until I was 50. I‘d spent a year as an MP in Vietnam. Another police sergeant and Vietnam infantryman and I would swap stories at the police department. Other officers would stop and listen, and one of them told me I should write a book based on my experiences. So, one day, I grabbed a yellow paper pad and a pencil and started writing. 2 years later, my first book, M.P., a Novel of Vietnam, was published. In case you are curious, yes, I did do most of the writing on a computer.

I enjoyed writing the book, and many people liked it. I decided to write a second book, then a third, etc., etc., and here I am, working on my 8th novel!

Tell us about your writing process: I am strictly a pantser. I never was very good at outlining and dislike it immensely, so when I start a book, I write the first chapter, then write an ending. From there, I go back to the beginning and start filling the story in, letting it flow as an active document—a way to say the story flows freely as I write.

Who is your favorite author? Edgar Rice Burroughs. I was introduced to the Tarzan books by my uncle when I was eight or nine. Burrough’s ability to create new worlds, beings, creatures, and plants is amazing. He is the best I’ve read at writing to show, not tell. Burroughs has written eighty novels, and I have read every one of them, most more than once.

I do have to admit the best book I have ever read is Hemingway’s The Old Man and the Sea. What a terrific story. It was books like Burrough’s and Hemingway’s that inspired me to become a writer.

Where do you place your settings—real or fictional locations? The five Vince Torelli mystery/thrillers all take place in the San Francisco Bay Area. Vince is a homicide inspector with SFPD, but his cases take him to various locations around the Bay Area. Since I grew up across the Bay from San Francisco, I try to use real places—streets, buildings, businesses, and surrounding cities are real places. I know when I read a book, if it takes place somewhere I am familiar with, it makes the story more enjoyable for me. Using real places makes the need for research a must. I use Google and Google Maps quite a bit when finding settings for various scenes. Also, I have a couple of close friends who are SFPD officers, so I rely on them to ensure I have Vince doing things according to SFPD procedures. Research is one of the tasks I most enjoy doing in my writing. I actually got the idea for my sixth book, The List, while researching information about the 19th century tunnels under San Francisco. I reconstructed the tunnels, which have mostly been filled in, and used them in several crucial scenes.

Do you write in more than one genre? Yes. I have two books, one at the publisher undergoing editing and getting the cover art done. The other one available through Amazon, Sin Eater, is about a serial killer in a fictitious college town in the central valley of California. There is a supernatural twist to the story that adds a dose of creepiness to the book. The other book, An Echo of Lies, is the story of a police officer who gets gravely wounded during a traffic stop. Not expected to recover fully, he makes a complete and astonishing recovery due to being possessed by a demon.

Do you have any advice for new writers? The best advice I can give is don’t let any doubts you have about writing stop you. If you worry about the mechanics too much, you will never get the book done. Attend a writer’s conference or two. Join a writer’s group— there are tons of them out there, easily found with a google search. Groups such as Sisters in Crime, Mystery Writers of America, California Writers Club can be very helpful in getting you started and on the right track. There will likely be a group near you, wherever you call home.

If you write with a public safety theme, check out the Public Safety Writers Association, which I am the president of. It is a nationwide group of very talented authors willing to help other members with anything to do with writing. We also have a wonderful three-day conference in Las Vegas every year, with terrific keynote speakers and many informative panels, plus it is loads of fun! It is well worth attending. Check us out at www.policewriter.com.

Thank you for taking the time to visit with me. Many thanks to George Cramer, himself an award-winning author, for having me as a guest on his wonderful blog. Keep writing!