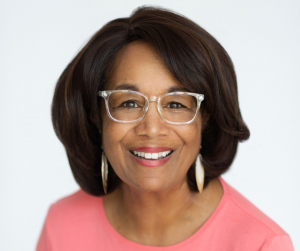 It’s 1923, and a young Black theologian—and Sherlock Holmes fan—receives a cryptic telegram to return home to Denver to solve the cold-case murder of her estranged father. But, in a city ruled by the KKK, will she unravel the crime before becoming a victim, too?

Patricia Raybon, former Denver Post reporter and former journalism faculty member at the University of Colorado at Boulder, is an award-winning Colorado author and novelist who writes at the intersection of faith and race. Her published books include My First White Friend, winner of the Christopher Award, and I Told the Mountain to Move, a Book of the Year finalist in Christianity Today’s 2006 book awards.

Her debut historical mystery, All That Is Secret—a Parade Magazine pick for “Mysteries We Love” Fall 2021—released October. 5th from Tyndale House. 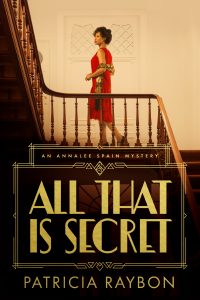 CrimeReads listed it among the “Most Anticipated Books of 2021: Fall/Winter Edition.”

Where did the idea come from to write about 1920s Denver and the Ku Klux Klan corruption? First, I love “clergy” mysteries—Father Brown by G.K. Chesterton, Grantchester’s vicar Will Davenport, and the like. My hope was to introduce a faith character in Colorado during one of its darkest times, the 1920s.  Since fiction needs a threat element, I used the Klan as a hovering danger for a young Black theologian’s attempts to solve her father’s murder. I hope it makes for good tension.

How unusual was a female seminary professor in the 1920’s? A Black theology professor of either sex? Not totally unusual for two reasons. Many college-educated women in the U.S. matriculated at all-female seminaries, forerunners of female colleges such as Smith or Wellesley. Their goal was to prepare young, unmarried women to be teachers. Meantime, there was a move by many denominations to launch colleges for “Negroes,” now known as Historically Black Colleges and Universities (HBCUs). Some white schools, such as Oberlin, had accepted Black students even earlier—at Oberlin since 1835. While most white colleges in the U.S. didn’t admit Black students until much later, Annalee would’ve found a place to study. Her study of theology would be rare but not impossible.

Was the neighborhood burning based on an actual event? Yes, the historic Shorter A.M.E. Church in Denver—founded in 1864 and named for an A.M.E. bishop (James A. Shorter)—was destroyed by fire on April 9, 1925, with many suspecting the Klan. One year later, on Easter Sunday, April 4, 1926, the congregation moved into a newly built building on the site of the previously burned structure in Denver’s Five Points neighborhood, staying at that location until 1981 before moving to Martin Luther King and Colorado boulevards. My husband Dan and I have been members of Shorter for nearly 40 years. Knowing about the fire, I used the incident in my novel, All That Is Secret.

What sort of research did you do? I started out reading histories about Colorado’s Klan. Then, I scoured old newspapers at the Colorado Historical Newspapers site (a treasure) and listened to oral histories at the Denver Public Library’s amazing Digital Collections—also poring over their old phone books, street maps, vintage photos, church bulletins. I love history, so digging through this material never got old.

Are you a Sherlock Holmes fan? What other mysteries do you like? Sherlock Holmes is my first fictional barometer for mystery writing. I also deeply love Agatha Christie’s Hercule Poirot, and I love historical mysteries set in other countries, including Vaseem Khan’s Baby Ganesh mysteries in India, Harriet Steel’s Inspector De Silva mysteries in Ceylon (now Sri Lanka), Rhys Bowen’s Her Royal Spyness mysteries in the U.K. (and her stand-alone novels), Alexander McCall Smith’s The No. 1 Ladies’ Detective Agency mysteries in Botswana, as well as American author William Kent Krueger’s Cork O’Connor mysteries in Minnesota and his excellent stand-alones.

This is your first novel. What led you to try fiction? The pandemic. It sounds prosaic, but I’d started working on a mystery some ten years ago and then put it on a shelf. However, during the pandemic lockdown of summer 2020, I was desperate for something to take me away from the horrible daily news. So, I went back to my mystery. What had changed was me. Older now, I simply worried less about what people might think or say about prim Patricia Raybon writing a romantic historical mystery—or worry about what my characters needed to say and do. No reaction could be worse than a pandemic. So, I let her rip and gave it my all.

Did you find the “learning curve” challenging? I found it exciting. I’ve been reading about fiction writing for at least 30 years. I admire the format and always wanted to learn how to plot a novel. So, during the pandemic, I sat myself down on my back deck and re-read Robert McKee’s wonderful screenwriter’s “bible” entitled Story, James Scott Bell’s books on structuring the novel, John Truby on The Anatomy of Story, G.K. Chesterton’s classic reflection on “How to Write a Detective Story,” Sol Stein’s Stein on Writing, plus bunches of books on understanding story beats, especially in romance and thriller plots.

I tried to have fun with the writing so the reader would, too. That was my goal—excitement and readability.

What did you learn by writing a mystery? To treasure life even more. In a mystery, since someone’s life usually gets taken, that invites a brave look at all things in life that die—especially spiritually—for each of us. What, indeed, can we learn about life by looking hard at dying? To a theological detective, that’s a key question. As for historical fiction, hindsight reminds us that winners write history. But what’s the rest of the story? Historical fiction allows a second look. Writing my novel helped me get in touch with both sides of a historical time and place.

As for the actual plot—the moment-by-moment action—I honored those experts who say to focus on what the character wants most. Once I met Annalee and understood what she wanted—to solve her father’s murder, over everything else—that was my North Star.

I wasn’t trying to reinvent the fiction wheel but roll with what others already have studied and shared about plot—starting, in fact, with Aristotle. I’m a beginner at this, however, so I know there’s much more to learn.

Is this the beginning of a series? Where are Annalee and Jack going from here? To my wonderful surprise, the Annalee Spain Mysteries are envisioned as a series. Tyndale House requested three books to start out. Mystery readers love series, of course. So, overnight, I went from writing one book to developing a mystery series. I just completed Book 2, which I loved writing.  I love that the relationship between Annalee and Jack is an intentional subplot in the stories. So, to find out what happens, follow along on their next adventure.

Did you enjoy the experience of writing a novel? It’s extraordinary fun, so much that I regret not turning seriously to fiction decades ago. My only consolation is believing that age and life experience will make me a better novelist. I sure hope so!

On my Faith Journey Newsletter at http://bit.ly/2jgpasW