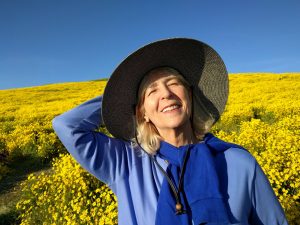 Her whodunit mysteries celebrate the mean streets of Santa Monica and a fictional California mountain village. She is a writing teacher and editor, a very amateur actress, and a comedy skit writer. She now lives in Ottawa, Ontario, Canada’s national capital.

By Accident may be the last in the series about my Santa Monica cop that I’ve come to know so well. I’m just too far away now for the scents and sounds of the city 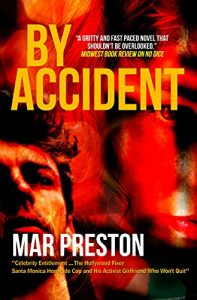 to reach me. I moved back home to Canada after a 50-year hiatus in California just in time for Covid-19. I’ll always be tempted to write another because interesting things happen in Santa Monica that give me ideas.

Santa Monica’s beaches and luxury hotels are tourist destinations for millions of international travelers, and they are the targets of crime. The city is also called “The Home of the Homeless.” Homeless people like sunshine and beaches as much as anyone else, and a felon on the run can’t flee from trouble any further west.

It’s also the home of about 100,000 residents, most of them ordinary dog-petting citizens. But Santa Monica is more known for celebrity sightings and drunken starlet wrecks in Lamborghinis on the Pacific Ocean Highway. I had my nose down some nasty rat holes in previous books researching international crime, genocide, and female mutilation. By Accident? I did my research while waiting for the hairstylist reading People magazine, Us, supermarket tabloids, and watching Entertainment TV. For a time, I knew who was doing whom and how. 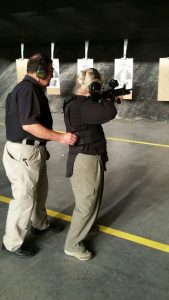 I’ve been fascinated for a long time watching smirking celebrities stroll out of the courtroom … if the case even gets that far. In By Accident, the celebrity couple gets it, and they get it good. I’m grateful to Sgt. Bill Lewis (Ret.) of the Oxnard Police Department for a chase and capture ending I never could have dreamed up myself.

Here’s a link to the Santa Monica Police Department series and a very different series featuring a homicide detective in the Kern County Sheriff’s Office.

Mar shooting the ARB-15 at the Writers Police Academy.