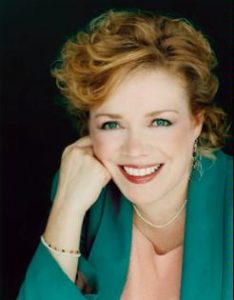 Jane Austen’s Lost Letters, the 14th in her series, will be published in December. She is a member of the fulltime faculty at Lehman College, part of the City University of New York, a contributing editor for Writer’s Digest Magazine, and the chair of the Wolfe Pack’s Black Orchid Novella Award (BONA) in partnership with Alfred Hitchcock Mystery Magazine. She is a frequent workshop leader and guest author at writing conferences, association meetings, and MFA Residencies. Also, Jane offers free monthly virtual workshops on the craft and business of writing, and Mystery Masterminds, a series of small group virtual workshops. More details are available at www.janecleland.com. 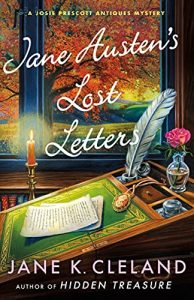 On a crisp October Monday afternoon, Josie returns to her business, Prescott’s Antiques & Auctions, after a lunch hour walk taking in New Hampshire’s autumn foliage to find an elegant older woman waiting to see her.

Veronica Sutton introduces herself as an old friend of Josie’s father, who had died twenty years earlier. Veronica seems fidgety, and after only a few minutes, hands Josie a brown paper-wrapped package, about the size of a shoebox, and leaves.

Mystified, Josie opens the package, and gasps when she sees what’s inside: a notecard bearing her name—in her father’s handwriting—and a green leather box. Inside the box are two letters in transparent plastic sleeves. The first bears the salutation, “My dear Cassandra,” the latter, “Dearest Fanny.” Both are signed “Jane. Austen.” Could her father have really accidentally found two previously unknown letters by one of the world’s most beloved authors—Jane Austen?  Reeling, Josie tries to track down Veronica, but the woman has vanished without a trace.

Josie sets off on the quest of a lifetime to learn what Veronica knows about her father and to discover whether the Jane Austen letters are real. As she draws close to the truth, she finds herself in danger, and learns that some people will do anything to keep a secret—even kill.

WHERE DO IDEAS COME FROM?

I use facts to write fiction, which is to say, I research my topic extensively and then ask a series of “why” and “what if” questions to convert those facts into ideas and those ideas into intriguing stories that entertain and get people thinking.

In Jane Austen’s Lost Letters, for instance, I learned that experts say Jane Austen wrote as many as three thousand letters, yet only 161 are known to have survived. People think they know what happened to the bulk the others—Jane Austen’s sister, Cassandra, burned them. But what if a few escaped that fiery fate?  What if two letters suddenly appear? How could you tell if they’re real? I want to know the answers! Don’t you?

On some level, I like researching more than I like writing, so I have to control my inclinations to dig ever deeper. My rule is that I research a specific question until I have the answer, and then I have to stop.

In Jane Austen’s Lost Letters, readers get to witness the appraisal process from authentication and provenance (clear title) to rarity and scarcity, and from association (has anyone important or interesting owned the object?) and condition to popularity and past sales records. It’s complex and, I think, fascinating!

WHAT IS YOUR WRITING PROCESS?

Once I have the basic idea rattling around in my brain, I use my Plotting Roadmap to delineate the key TRDs. “TRD” is my term for plot Twists (unexpected, but not the opposite); plot Reversals (unexpected, and the opposite), and moments of heightened Danger (which might refer to physical danger, but could also include spiritual, emotional, or mental danger). Jane’s Plotting Roadmap helps me navigate unknown terrain, from the beginning of my story all the way to the final conclusion. Part of the beauty of the tool is that you no longer have to write an entire book—you only have to write to the next TRD. In other words, the tool helps with plotting and pacing; it also helps writers by breaking up a task that can feel overwhelming into smaller, more manageable pieces.

Jane’s Plotting Roadmap includes two service roads that run alongside the main highway. Each service road represents a subplot. Your two subplots (one related to an interpersonal relationship and the other related to a nonfiction element of your story) have their own TRDs.

An important point is that Jane’s Plotting Roadmap is a guide, not a straightjacket. There’s nothing wrong with tweaking it, or even revising it, as you’re writing your story—or even in a later revision. I discuss my Plotting Roadmap, TRDs, and subplots (they’re not secondary!) in my two award-winning books on the craft of writing, Mastering Suspense, Structure & Plot and Mastering Plot Twists. By the way, may I mention that these books have been recommended by Dan Brown, David Baldacci, Neil Gaiman, Hank Phillippi Ryan, and Louise Penny, among others. My cup runneth over at these tributes!

I find openings tough, both figuring out where my story begins, and writing it in such a way to hook my readers right away. Once I’ve drafted fifty or so, then I’m confident I can tell my story.

I wish I’d known more about craft when I was starting out. In my experience, most writers are drawn to the field because they’re innate storytellers, but they don’t necessarily known anything about craft. In my efforts to raise the bar on my writing, I began researching specific issues—that’s why I wrote those two books on the craft of writing; that’s why I’m a contributing editor for Writer’s Digest Magazine; and that’s why I offer free monthly webinars on specific topics related to craft, everything from “Openings that Kill It” to “The Art of Revealing Backstory” to “Mastering Story Structure.” I analyze exemplars and share my findings. You can find out more information at www.janecleland.com. I’ll hope to “see” you there!

I also hope you’ll give Josie a whirl! The Josie Prescott Antiques Mysteries, set on the rugged coast of New Hampshire, feature antiques appraiser, Josie Prescott. The books are often reviewed as an Antiques Roadshow for mystery fans.

Jane Austen’s Lost Letters would make a wonderful holiday gift—to yourself or someone you love! It’s available from your favorite independent bookseller, major retailers, or online vendors, like Amazon.