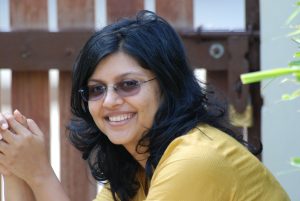 Harini Nagendra is a Professor of Sustainability at Azim Premji University, Bangalore, India, and has written several non-fiction books, including the award-winning Cities and Canopies: Trees in Indian Cities. The Bangalore Detectives Club, the first book in the Detective Kaveri mysteries, is her first novel. She lives in Bangalore with her family.

The Bangalore Detectives Club is the first in a charming, joyful, cozy crime series set in 1920s Bangalore, featuring sari-wearing detective Kaveri and her husband, Ramu. Solving crimes isn’t easy. Add a new marriage and a jealous mother-in-law into the mix, and you’ve got a problem. But Kaveri finds nothing is too difficult – not when you have a talent for math, a head for logic, and a doctor for a husband.

Do you write in more than one genre? Yes, I have written several popular non-fiction books on nature and the environment – part of my day job as an ecologist and university professor. I also write a regular monthly Sunday newspaper column. Writing non-fiction is a very different process – I write tight, to a specified word count, and need to make every word count. I need to switch off my non-fiction voice very firmly in order to write fiction, or else I can never get going!

What brought you to writing? From when I can remember, I’ve always written – at first, short stories for school newsletters, then a small ‘book’ for my father when he was living in a different city for a while. Writing is a huge stress-buster for me and one of the things I love doing the most.

Where do you write? What, if any, distractions do you allow? I write anywhere and everywhere, but my favourite writing spot is on an old couch in my bedroom. I drink copious amounts of tea as I write – Indian masala tea, or chai, with milk and many spoons of sugar. When I’m especially stuck, I ask Alexa to play old Indian movie songs – period music, for inspiration.

Has an association membership helped you or your writing? Sisters in Crime, and Mystery Writers of America, have been of huge help. I’m beginning a career in fiction writing late in life – my first book will be published in the same month I turn fifty. I’m also based in India, thousands of miles from where my books are being published in the US and UK. Thanks to SinC and MWA, I have met so many incredibly supportive authors, attended virtual happy hours, and made some good friends – and lucked out on blog opportunities such as this one!

How long did it take you to write your first book? The Bangalore Detectives Club is my first fiction book. I wrote a number of short stories when I was 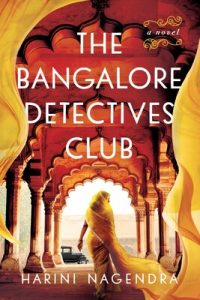 younger. And I have written non-fiction books, but that’s always been easy, as they are largely based on my research as a career academic. I never thought I could write a full-length novel.

Sometime in 2007, the main protagonist, Kaveri, apparated into my mind and demanded that I write about her. In my innocence, I thought it would take me a few months at most – I was then pregnant with my daughter. I believed I could churn out the book in the few months that I planned to take slow with my new baby, rocking her with one hand while typing with the other. Boy, was I naïve. It took me fourteen years to complete the book and bring it to publication. The best part of the long journey is that my daughter, now a teen, is one of my best beta-readers (the other is my husband)! With a three-book series in hand, I can’t afford to take fourteen years for each new book. I need to write a new book every year and shift gear into a different mode. My day job is hectic – I teach, lead a research centre, and do quite a bit of research administration, so finding time to write is not easy. But thanks to my long experience with writing non-fiction, I’m used to squeezing time out to write in brief chunks – it all adds up.

How long to get it published? I was very fortunate. My agent, Priya Doraswamy of Lotus Lane Literary, is an old school friend from Bangalore. She really ‘got’ the book from the start and was a great help in pushing me to the finish line and helping me edit and revise the book into shape. That took about six months. Then things moved very quickly. Within a few weeks, Priya found a terrific publisher in Little Brown UK’s Constable and Robinson imprint, which specializes in crime fiction. Later, Pegasus Books acquired the US rights.

How do you come up with character names? That’s relatively easy. I look for common Indian names of the era I’m writing, which are specific to the community I’m writing about – I try and make sure they’re relatively easy for a foreign audience to pronounce, but that’s about it. I did make a blooper when I realized (just before the book was going into copy-editing) that one of my main characters, who had a very common name – think Mike or Anne in the US – shared her name with at least two close family members, and one friend, any of whom might take offence. I quickly changed her name to a less common one. Now I try to make sure that I select names of people that I do not know personally.

We hear of strong-willed characters. Do yours behave, or do they run the show? My characters certainly run the show. Two new characters – Inspector Ismail and a woman in trouble, Mala – were not part of my original plot. Still, they turned up one day, inserted themselves onto the page, and insisted on taking the story in a different direction. They’re terrific, and I have enjoyed getting to know them – I guess I just need to get comfortable with giving up control.

What kind of research do you do? My series is set in 1920s Bangalore, during the British colonial era, and I need to get the setting right. I’m fortunate to have a large amount of archival material on Bangalore history, which I’ve collected over the years as part of my work on Bangalore’s ecological history, but I do need to re-read to gather details on the architecture, weather, traffic conditions, and other important aspects that determine the setting. I read old newspapers to get the little details, such as a notice of a flower exhibition or a workers’ strike. And to understand the social milieu, I talk to my mom, who is in her 80s. Her grandmothers came of age in the same era that my protagonists did. The stories my mom tells, passed on from her grandmothers, give me an intimate glimpse into women’s domestic lives in 1920s Bangalore and help me to understand their daily joys and obstacles in a way that historical documents simply cannot match.