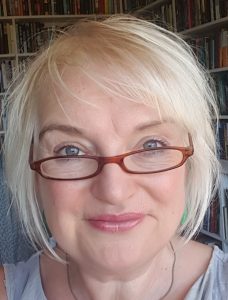 Catriona McPherson was born in Scotland and lived there until immigrating to the US in 2010.

She writes historical detective stories set in the old country in the 1930s, featuring gently-born lady sleuth, Dandy Gilver. The latest of these is 2021’s THE MIRROR DANCE. After eight years in the new country, she kicked off the comic Last Ditch Motel series, which takes a wry but affectionate look at California life from the POV of a displaced Scot (where do we get our ideas, eh?). Book 4, SCOT MIST, came out in January. She also writes a strand of contemporary psychological thrillers. The latest of these is last year’s A GINGERBREAD HOUSE.

Catriona is a member of MWA, CWA, Society of Authors, a proud lifetime member, and former national president of Sisters in Crime. www.catrionamcpherson.com

Scot Mist: March 2020, California is locking down, and the wagons are circled at the Last Ditch Motel when Lexy Campbell discovers a message scrawled on the 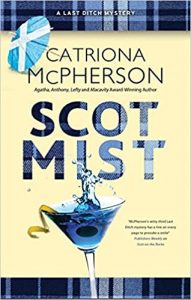 front fence in human blood. Are they under attack from someone on the outside? Scary as that is, the alternative is worse by far.

Where do you write? What, if any, distractions do you allow? I have a study, and I’ve been working in it non-stop for a while, what with one thing and another. In normal times, I tried hard to break the association between place and productivity, and I got to the point where I could work in airports, on planes, in coffee shops, in hotel rooms, on the beach. I wonder if I’ll have to build that up again? I look forward to finding out.

Who’s your favorite author? Well now. Living? Stephen King. Of all time? Jane Austen. And if I’m going to follow the rule of three, I need one more. Dorothy Whipple. She was a bizarrely forgotten writer of domestic drama from between the wars. She is now a triumphantly rediscovered joy, published by Persephone Press. One of my treasured memories is of answering this question after a library talk and having a very posh, very elderly lady say: “My word, I adored Dorothy Whipple when I was a girl. I shall try Stephen King now, I think.” I hope she did. They have the same big heart and effortlessly confident style.

How do you come up with character names? Urgh. It’s a perennial problem, and it got worse when I left Scotland and stopped hearing Scottish names every day. Scottish names are tough anyway because you can’t have as many Mcs and Macs in a book as you get in real life. It looks terrible on the page. Whenever I hear a good (non Mc/Mac) Scottish name, I write it on my hand in Sharpie and transfer it to my master list when I get home. First names can be a struggle too. I tried three times to have a heroine called Tash. The first became Gloria. The next ended up as Jude. Tash finally appeared in A Gingerbread House last year. But even then, she had three aliases in the course of the book.

Do you base any of your characters on real people? I do, but only out of love and usually, once the person in question is gone. I had my Aunty Doreen McPherson win a bonny baby competition in my (and her) hometown in 1923, in The Burry Man’s Day. And Miss Drumm in The Child Garden was based on my beloved late step-granny-in-law, Laura McRoberts. Todd, the fabulous gay best friend in the Last Ditch, is rooted in my FGBF Alex MacLeod. (See what I mean about the Mcs and Macs?)

What is the best book you have ever read? Blimey. That’s a tough question. And I’m not going to answer it. What I will say is that in my study – I’m looking at 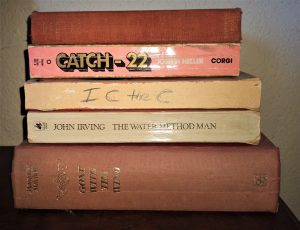 them right now – I’ve got a wee pile of five books which are the books that made me a writer. I discovered them as a teenager, and each one showed me something new that a novel could be, that a writer could do. They are – in order of my finding them – Pride and Prejudice, Gone With The Wind, Catch-22, The Water-method Man (John Irving), and I Capture The Castle (Dodie Smith).

Do you have any advice for new writers? Nothing earth-shattering or original, to be honest. Finish the book! When you’re disheartened, keep going. When you think of a better story, leave it aside and plough on. Finish. The. Book. Charlaine Harris said it best when she said, “Anyone can start fifteen novels; it takes a writer to finish one.”