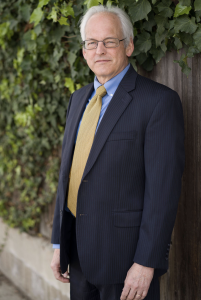 Carl Vonderau is the author of MURDERABILIA, which won The Left Coast Crime Award for Best Debut Mystery and the San Diego Book Award for Best Mystery/Suspense. Like the protagonist, he has been a private banker and was raised in a Christian Science family. On the other hand, his father was never a serial killer whose photos launched the “murderabilia” market. Carl has worked in the U.S., Canada, Latin America, and North Africa. He is now a full-time writer. He has another book in submission with publishers.

Carl is the president of Partners in Crime, San Diego, a chapter of Sisters in Crime. He is also a partner at San Diego Social Venture Partners. This organization mentors other nonprofits to reach the next level. Carl lives with his wife in San Diego, and they have two grown sons.

WHERE ARE YOU IN YOUR WRITING CAREER? I have been writing for thirty years. I guess it takes some time to become competent. My money-making career was as a banker. That’s why the characters in my books are in the financial industry.

My debut novel, MURDERABILIA, is a thriller. Unfortunately, the publisher, Midnight Ink, 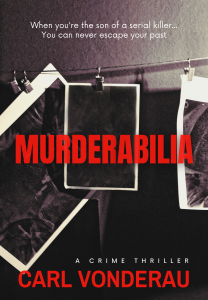 closed its doors. I’ve reissued it with Amazon with a new cover, so it is readily available again. A number of publishers are considering my second book. It’s a nervous time until someone decides to buy it.

I’m currently working on a third novel which is stand-alone domestic suspense.

WHAT IS YOUR WRITING PROCESS? I begin with a premise and then try to outline 30-40 scenes. I usually structure around an inciting incident and 3 acts. Then I start to write by hand. I do this on a legal pad and like to work at coffee houses. The objective is to write as fast as possible. When I have at least 3-4 pages, I’m relieved because I know I’ve got something that can be a scene. When I’ve finished the scene by hand, I try to type it into my computer within 24 hours. In that process, I will add parts like gestures or settings, or senses. I’ll also take out writing that doesn’t work. Sometimes while I’m typing, I see that the scene doesn’t really begin until the middle, so I leave out the first part.

I’m continually trying to improve my process. For the latest book I’m working on, I used Plottr to map out the scenes. Then I tried NaNoWriMo for the first time and wrote like a madman to get down 57k words. I’ve never written even close to that much so quickly. This process has enabled me to get a very rough draft faster than I have ever gotten one before. Just don’t ask about the quality. Now I’m going back to each scene to make sure it deserves to be in the book. If it does, I revise it.

I write a few hours every day, taking breaks throughout. One of the most creatively productive things is to finish working on a  scene and then do something else like exercise or the dishes. This gives me distance and allows the scene to reverberate in my subconscious. I usually get a good idea while I’m away from my laptop. The shower is great.

HOW LONG DID IT TAKE YOU TO GET PUBLISHED? A lifetime. My kids are in their thirties, and I began writing when they were very young. I was also working, so writing became any snatch of time I could steal from the day. We moved from Chicago to Montreal, and I had to work and learn French. But I always made some time to write. The lesson I got from these years is that, even if you only have 15 minutes, you can scratch out some words. You just write as fast as you can. That’s part of the reason it took me so long to write my first book.

That first unpublished novel took 15 years. I didn’t have a writer’s group or mentor, so I just stumbled around. The novel was set in Colombia. It didn’t all go into the drawer. I used some of it years later for a short story that went into the San Diego Sisters/Partners in Crime anthology, CROSSING BORDERS. I started on another novel after we moved to San Diego. That took about five years. It was also unpublished. But by then, I had discovered writing conferences and writing coaches, so I got better.

MURDERABILIA took about four years to write. There were more than 20 revisions. But this time, I got to work with Jacquelyn Mitchard as a content editor and learned a lot. Then I had to find an agent. I took a course on crafting elevator pitches. I used what I came up with to land an agent at the San Francisco Writers Conference. It took more than a year for the book to finally come out in print. It won a Lefty and a San Diego book award. Not exactly an overnight success.

There are a couple of big things I’ve learned over all this time. The first is that tenacity is more important than talent. The other thing is: Get feedback from a writer’s group, courses, conferences, or a writing coach. The book never works as well as I think it does.

HOW IMPORTANT IS SETTING TO YOU? I think setting is extremely important. It is not only the physical details and sensory feel of where the book takes place. It is also the culture that surrounds the characters. I like to go to the cities where my books are set. In my first book, I went to Colombia and walked the streets of Bogota. I wrote down impressions in a notebook. Most of it I didn’t use. But some of those details really helped create a sense of place. For MURDERABILIA, I used details from Colombia, Algeria (where I’d traveled on business), San Diego, and banking. I got help from friends in Tijuana for the book currently in submission. They took me to places where I could set scenes. Then I combined what I’d seen into some fictional locations. I also used notes and pictures. I want the setting to evince who my characters are and how they feel.