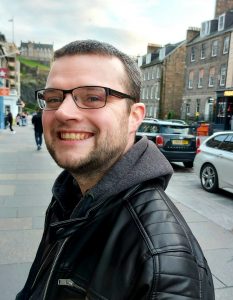 While a qualified and experienced naval architect and an avid car enthusiast, he always reserved space in his life for a deep fascination with paleontology. This drove his writing process as he strove to write tales of the rich and complex history of life on Earth.” 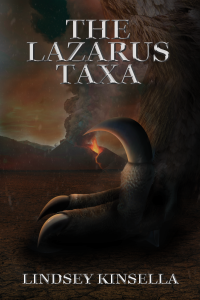 “67 million years in the past. Deep time—the true final frontier. But all is not as it seems. Which should be feared most—the dinosaurs… or the people? The Lazarus Taxa follows the first scientific expedition through time to the Late Cretaceous.”

The Lazarus Taxa is available now, having only been released at the start of the year. It can be found on Amazon here: https://www.amazon.co.uk/dp/1739750012/ref=cm_sw_r_apan_glt_i_RXG3N1BFQ5FMC8F1E7Q6

Do you write in more than one genre? Yes! While I only have the one book published, my works in progress span sci-fi, fantasy, and horror. I tend to write a story and then worry about what genre it might fit into later, resulting in some “genre-hopping.” I like to experiment with different styles, audiences, and tones; I don’t think any of my current works bare much resemblance to one another.

What is the most challenging part of your writing process? Simply finding the time! Between looking after two children, working full time as a naval architect, and restoring classic cars, it gets a little tricky to get the chance to just sit down and write. Fortunately, I’m somewhat of a night-owl, so late nights are often my writing hours.

How long did it take you to write your first book? From writing the first line to publication took me almost two years. Being my first novel, there was a steep learning curve and many, many re-writes. I think I have my process dialed in now, so I’m hopeful that future projects can be turned around somewhat quicker!

How do you come up with character names? I draw a lot of inspiration from real people. For example, one character in The Lazarus Taxa, Dian, is named after Dian Fossey—I felt both the real life and fictional Dian stood for very similar ethics.

Strong-willed characters. Do yours behave, or do they run the show? They most certainly run the show. One of the most important aspects in character writing, I find, is that characters should make mistakes and bad decisions because that’s exactly what real people do. Sometimes they’ll act rashly, or even cowardly—sometimes they’re just plain stupid. These are core parts of what makes them believable.

Do you ever kill a popular character? If so, what happens to your story? Call me a sadist, but I’m probably more likely to kill off a popular character! Sometimes a death is simply a way to demonstrate danger or to cleanly clean up a character who has served their storytelling purpose. Often, however, a death is used to drive the plot as a motivation to the main characters. The reader has to feel that motivation, too, so the reader should care about that character as much as the main character does.

Do you base any of your characters on real people? I do, but never an entire character. I’ll take the characteristics of certain people and blend them together. It helps to create believable characters; it’s far easier to imagine how a real person might react to the situation you have placed them in.

Do you outline, or are you a pantser? I definitely outline; in fact, I tend to do that long before beginning to write a book in earnest. My phone is filled with skeletal outlines of novels which I note down as they come to me. By the time I sit down to write a new project, I already have a pretty good outline.

What kind of research do you do? It depends on the story, but certainly, there was a lot of paleontological research involved in The Lazarus Taxa. It was important to me to present up to date representations of dinosaurs and not just Hollywood monsters. Hence, months of research went into these animals. Of course, being somewhat of a natural history geek, I had years of pre-existing research to build on.

Where do you place your settings—real or fictional locations? I tend to prefer fictional settings. Perhaps it’s just laziness, but I find researching whether a real life village has, for example, a train station or a hospital in order to fit the story rather tedious. If it’s a place I’m not personally familiar with, it becomes an easy way for plot holes and inaccuracies to creep in. If it doesn’t add to the plot, I’ll avoid real places where possible.

Of course, much of my work in progress is set in the real town of Lyme Regis, but that’s a rare exception.

Looking to the future, what’s in store for you? I have more book ideas than I know what to do with, so I think I will continue to write for some time. My current work in progress is a quirky, family-friendly fantasy novel that I hope to release early next year.

After that, I’ll have to choose between a sequel to The Lazarus Taxa and one of my many scribbled outlines!

Do you have any advice for new writers? I’d say I have two pieces of advice. Firstly, if you have an idea, just write it! It sounds so simple, but for years I sat on what I thought were some great ideas for a story. I convinced myself that putting them in a book was unrealistic, and it took the sheer boredom of lockdown for me to pull the trigger.

Secondly, a professional editor is priceless. Not actually priceless, they’ll definitely put a price on it, but a good editor can be the difference between a good and a bad book. There are so many norms and conventions within novel writing that, as a first time writer, you simply won’t be aware of (I certainly wasn’t).