SHELLEY RILEY – From the Kentucky Derby to Fantasy 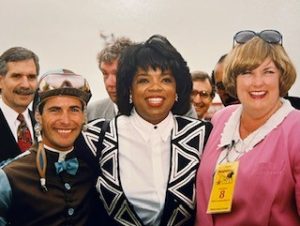 Shelley Riley had a deep love for horses from an early age, and this love took her from humble beginnings at the Alameda County Fairgrounds to the storied barn area of Churchill Downs.

The story of Casual Lies began on a snowy January day in Lexington, Kentucky. While attending a thoroughbred sale, Shelley glanced up and made eye contact with a tiny, fuzzy eight-month-old foal that nobody else seemed to want. And the rest is the stuff of fairytales.

That nondescript colt went on to take Shelley and her husband Jim, an accomplished horseman in 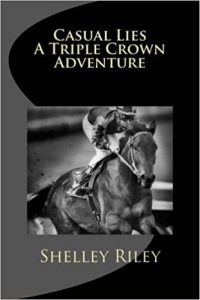 his own right, on an adventure of a lifetime. They went on to compete in all three Triple Crown Races—another first at the time. By finishing second in the 118th running of the Kentucky Derby in 1992, Casual Lies rewarded Shelley with the highest finish for a horse trained by a woman in the history of the Kentucky Derby. A record that still stands thirty years later.

In Casual Lies – A Triple Crown Adventure, Shelley gives the reader a fun look behind the scenes of what that adventure was like for her and Jim.

Why did you wait two decades to write your memoir about Casual Lies? It would have been far different if I had written the memoir right after the Triple Crown. I had a lot of material, mainly since I’d been writing a Daily Diary for both the Daily Racing Form as well as one for a San Francisco Bay Area newspaper. By waiting, the book became less a purge and more of a cathartic remembrance of a remarkable horse who electrified my world for far too short a time.

In 2012, I joined the Tri-Valley Branch of the California Writer’s Club. My thought was to go from writing special feature articles for local newspapers and get an idea of how to finish a middle-grade novel that I’d started many years before. Instead, I was encouraged to write a memoir. It was the best advice I’d received since Charlie Whittingham had encouraged me to run Casual Lies in the Kentucky Derby.

Two things happened by sitting down and rereading the daily diaries I’d written. I reconnected with the things that made my horse special. I remembered all the fantastic things that we experienced because of Casual Lies. Truthfully, it’s still hard to believe it really happened.

Using the equity in our house, I’d bought a tiny colt that nobody else wanted. I shared how he grew into a headstrong, charismatic horse that took us on a journey you couldn’t have replicated if you had all the money in the world. 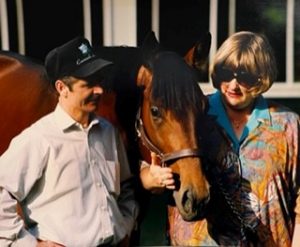 Fans from all over the world have read Casual Lies – A Triple Crown Adventure. You’ll laugh, you might cry a little, and trust me when I say I had no trouble poking fun at myself.

Although Casual Lies didn’t win the Kentucky Derby, he still holds a place in history. But for me, he was my bright-eyed and mischievous Stanley.

So how did you go from writing a memoir to penning Sword and Sorcery Fantasy novels? When I was a kid, I was an avid reader. But each book always had to have something to do with horses. As I grew older, my taste in literature became increasingly eclectic. Ernest Hemingway, Jack London, Wilbur Smith, Larry McMurtry, Steven King, Dean Kootz, etc. the list would be endless. But my all-time favorite, as it turns out, is J.R.R. Tolkien’s Lord of the Rings, with Larry McMurtry’s Lonesome Dove a close second.

A perfect book doesn’t come with enough pages. A good story involves a fellowship that you can feel a part of. For me, a good story is one where you find yourself invested in the fellowship’s success, you’re a part of the team, and when the story comes to an end, you’re loath to say goodbye to your new friends.

I love writing short stories. I find that a thought or an image often triggers my inspiration. The idea for Into Madness – The Born from Stone Saga came from pictures I took of gargoyles situated atop a gothic cathedral when I was touring Europe.

It was one of these shots that brought about Mystislav, a dragon made of stone, who comes to life under a full moon. He flies across the city and lands on the donjon tower of Carolingian castle. Mystislav hears the cries of a newborn babe and . . .

It wasn’t a short story, but it was a strong beginning for a YA Fantasy. As it turned out, the beginning was the easy part. Now I had to write a story. It took over four years.

Tell us about Into Madness, your first book in the Born From Stone series. The marketing blurb goes like this; After a decade in hiding, captured, and imprisoned, Ravin Carolingian is left to question everything she thought she knew about herself.
Still, as the line between ally and enemy blurs, one thing becomes clear. If Ravin’s going to help the Carolingian people, she must first escape the evil that walks the halls of the place she once called home.

As a reader, I like strong characters, adventure, and scenes that engage the reader’s senses. So that is how I chose to write this story. It never ceases to amaze me how the characters occasionally grab the bit and runoff—going in an entirely different direction than I had first imagined.

So what is the title of the second book, and when is the release date? The second book is Hearts Divided, and the third is The Reckoning. Hearts Divided is nearing completion. I have been receiving good-natured demands for the release date. Words in bold type like; NOW! and TOMORROW? have been hitting my inbox. Those types of demands tend to light a fire. Every writer knows that you don’t want to piss off the reader.