FRANK SCALISE – His Most Important Book Yet 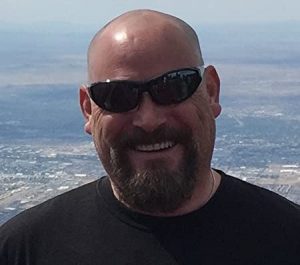 Frank Scalise (Frank Zafiro) served with the Spokane Police Department from 1993 to 2013, holding many different positions and ranks. He retired as a captain. He writes gritty crime fiction from both sides of the badge. He is the author of over thirty-five novels, including the River City series of police procedurals and his hardboiled SpoCompton series. In addition to writing, Frank hosts the crime fiction podcast Wrong Place, Write Crime. He is an avid hockey fan and a tortured guitarist. He currently lives in Redmond, Oregon.

As a lifelong writer, I saw these experiences through that additional artistic lens. So when I started publishing short stories in 2004, it was no surprise that most of them were crime fiction. By the time I retired in 2013, I’d written dozens of stories and ten or so novels. Since then, I’ve added to that catalog, putting my novel count at around thirty-five. 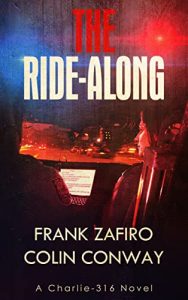 But the latest one, The Ride-Along, may be my most important one yet.

Before you think that is an ego-driven, self-promoting bit of hyperbole, let me add that I don’t think everything I have to say is important. Most of it is just like the things we all say—in other words, the stuff of daily life. My books are meant to entertain and make readers feel and occasionally think a little—this one is different.

As police-involved deaths gained more and more public attention and this subject became a consistent (and loud) part of public discourse, I found myself in an uncommon position.

On the one hand, I’d done the job of law enforcement for two decades. My roles were many and varied, including the heavy lifting of patrol and investigations and leadership. Almost immediately after retiring, I embarked on a four-year mini-career teaching police leadership all over the US and Canada. As a result, I knew the profession well.

So I was frustrated by the lack of understanding shown by much of the public when it came to the job. By this, I mean everything from the ludicrous “shoot ’em in the leg after you kick the knife from his hand” crowd to those with more grounded criticisms. It wasn’t necessarily that they didn’t sometimes have valid points. It was that they were uninformed when it came to the realities of actual police work, and this lack of understanding often resulted in a wide swath of cops being seen in a bad light. Since I’ve known, and sometimes worked closely with, hundreds of men and women in the profession, I knew the high quality of dedicated people doing this difficult job. So that frustrated me.

At the same time, as I got a little distance from the day-to-day workings of the job—and, frankly, outside of the echo chamber of the profession—I saw places where we didn’t do things well. A fair chunk of this revolved around poor communication, or the lack of, with the public. In other words, we don’t do ourselves any favors with the attitude of “we don’t need to explain this to you.”

Some of the prevailing attitudes in the profession seemed wrong to me, too. Same with some of the overarching strategies that have been in place for decades. It seemed clear to me that law enforcement needed to change.

To be fair, we ask a lot of our cops. Some of those tasks would be better done by other professionals, with the result being a) better service delivery to the citizen and b) better use of our law enforcement resources elsewhere.

These two competing frustrations combined to create the most significant frustration of all. That was, I saw hardly anyone actually discussing the issue with the goal of understanding and problem-solving. Instead, things devolved into entrenched political positions. People debated with sound bites and chanted slogans. The best you could hope for was that they’d wait until the other party had finished speaking before launching into a diatribe… but most people sought to drown out the other instead. This tendency existed all across the opinion spectrum.

That wasn’t merely frustrating. It was maddening.

No one was listening.

So I wrote a book that forced people to listen to each other. I put two characters—a police officer and a police reformer—into the same patrol car for an entire graveyard shift. Due to their opposing views, sparks fly… and not the romantic kind.

Make no mistake; this is still a procedural. The officer and the ride-along go on calls for service. But they also talk. They get angry. They are challenged. But… they also listen a little bit.

My goal in writing this book was to fairly present the ideas of both characters. Both are good people with strong convictions. Neither is a straw man for the other to beat up on and then convince of his/her views. Both get the opportunity throughout the book to tell their own truths.

It’s a bit of a spoiler here, but both also have moments in which they pause and actually consider what the other has said.

his isn’t a Pollyanna, Kum-bay-yah novel. There are ragged edges. After all, it is a Charlie-316 novel, and anyone reading the first four containing the Tyler Garrett arc will know better than to expect something utopian. But it does represent two people doing something I wish more of us would do, myself included.

Have an honest, hard conversation that includes listening as much as—or more than—speaking.

I’ve outlined the premise of The Ride-Along already, but for the sake of clarity, here’s the description:

The Tyler Garrett scandal rocked the Spokane Police Department two years ago. Now, a consent decree governs the agency, with Washington D.C. directing its reform. It’s a tumultuous time in the city, and public outcry over local and national events is high.

Change is in the air.

Officer Lee Salter is a third-generation cop who bleeds blue. Amid the departmental chaos, he does the only thing he can—be a good officer. That means showing up for every shift, responding to calls for service, and always doing the right thing. All the while, the Department of Justice and its local supporters hope to catch another officer in its net of reform.

Salter refuses to be that officer.

Melody Weaver is a teacher and activist who believes in a better way. Despite her demanding profession, she dedicates herself to the cause of reshaping policing in her city so that the terrible events—both local and national—can stop. To understand what needs to change, she needs to see the reality of the job up close.

That means a ride-along on the graveyard shift.

As you can imagine, it’s a big night for both of them.

If you are looking for a police procedural, it’s in here. If you’re looking for something to make you think. No matter where you are on the opinion spectrum, there will be times you’ll pump your fist in agreement and others where you’ll shake your fist in disagreement. And I suspect there’ll be a few times where you might drop that fist entirely, cock your head, and consider something in a way you hadn’t before.

And that’s why I think this might be the most important book I’ve ever written.