Reminder: This blog is meant to support authors and their work. It is and will remain apolitical. I reserve the right to edit out comments of a political nature. Thanks to all of you who make this a place to share and review work.

A while back, I mentioned that I would start keeping a few Thursdays open for my posts and a few book reviews. Well, today, I’m starting with Wallace Stegner. 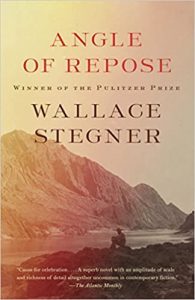 facets of excellent writing craft. However, I found a “sameness” that permeated the work. Throughout, Oliver Ward struggles to satisfy his wife, Susan Burling Ward. He never quite convinces himself that he is worthy enough for her. His melancholy haunts the reader at every turn. Susan’s feeling of desolation and desire for a more genteel and literary life, expressed in her thoughts and letters, adds to the deep sense of sorrow. This sameness made it challenging for me to read more than one chapter at a time. That said, Stegner’s expert artisanship is evident throughout the novel. His craft is so powerful, so apparent that he can break “the rules” of writing at will with no harm to the story.

Stegner develops his characters so artfully that they become living, breathing people whose attributes and flaws make them into human beings we know and understand. He does not overload the reader with long and exhaustive descriptions. Instead, over many chapters, he reveals small details so that our view of the characters develops as the story unfolds. He gives the reader no more than what is essential.

When the Ward family is separated at the Cheyenne train station, the reader sees and feels hopelessness as a young man runs along the train. The emotion is palpable; one can feel the sorrow. The behavior of another is so vivid one can almost feel the glass he leans against. The family’s estrangement never ends.

Exposition is another tool used well by Stegner. Often writers use exposition to give the reader large doses of information that slows the pacing and can be a distraction. Stegner overcomes that with his exposition in the correspondence between Susan and a lifelong friend. Early on, he uses it to raise the possibility of a lesbian relationship between the two women.

In one of her longer letters, Susan speaks of a trip to San Francisco where she visits several other women from the East who have followed their husbands west. She and the women are alike in their shared feelings of loss.

Wallace Stegner’s Angle of Repose gives the reader many fine examples of his craft. It is not a novel that I enjoyed, nor is it something I would recommend as light reading. However, this is a must-read for writers, students of the craft, and history buffs.