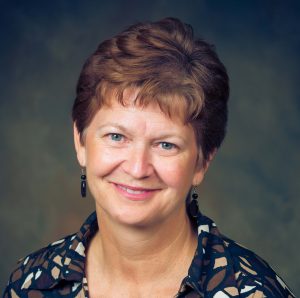 Terri Benson has published three novels and nearly a hundred articles and short stories. In addition to The Pickup Artist, her credits include November 2021—The Angel and The Demon, Book #1 of Lead Me Into Temptation, a historical romance; 2012—An Unsinkable Love, a historical romance set on the Titanic and in the New England Garment Manufacturing District. She works at a Business Incubator, and her hobbies include camping, jeeping, and dirt biking. More info at https://www.terribensonwriter.com/

The Pickup Artist, A Bad Carma Mystery, was released 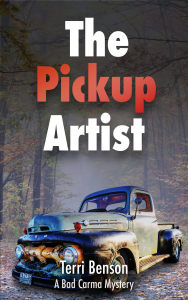 on April 1, 2022, from Literary Wanderlust. A female classic car restorer discovers her newest project comes complete with a serial killer who now has her in his headlights, and, by the way, she’s also the local LEOs #1 suspect.

Do you write in more than one genre:  Yes, I write both mysteries and historical romance, but no matter what I’m writing, there is bound to be romance, mystery, and a little bit of history.

Tell us about your writing process: I’m a bit odd in that I come up with a title first. Then I figure out what scenario I can see working with that, then I write. Since both my series are fairly defined by the series titles, I know what kind of book I’ll be writing from the start.

Has an association membership helped you with your writing? Absolutely. I’ve belonged to Rocky Mountain Fiction Writers for more than a decade, and I fully credit the great friendships I’ve made there with dozens of amazing writers, agents, editors, and publishers—including the two who published my last two books (The Pickup Artist and The Angel and The Demon)—to those friendships. I had access to hundreds of workshops from RMFW and Pikes Peak Writers that helped me hone my craft, getting me to the point agents and editors would look at my work. I also found the publisher for An Unsinkable Love pre-RMFW via a contact in a critique group I belonged to. I can’t recommend “finding your tribe” enough for new and not so new writers. I’m also a member of Sisters in Crime.

How long did it take you to write your first book? My “first” book took 20 years, but I’ve never submitted it to anyone – eventually, I probably will. My first “published” book took four months to write, and since it was for an open call for books about the Titanic, it had a due date to submit. I remember meeting my best friend, who is my most critical beta reader, and her passing the manuscript from her car to mine in the dark at about 8:00 at night the day it was due to be submitted. If a cop had seen us, they’d have suspected a drug deal! I made edits and submitted it with less than 10 minutes to spare. It was published about a year later, in time for the 100th anniversary of the Titanic’s sinking.

How do you come up with character names? I drive through a cemetery every day to get to work and eat lunch there almost every day (it’s very pretty and quiet, with frequent visits by deer). I often wander around and write down names to use. And for Renni in the Bad Carma Mysteries, when I needed to have her full name be mentioned, I ended up with Renault Landaulette Delacroix because her father was a car-obsessed Frenchman.

We hear of strong-willed characters. Mine run wild and crazy! I’ve discovered some amazing things about my characters over the years, but only when they let me. And sometimes that plays havoc with the story! Do yours behave or run wild?

Do you have subplots? If so, how do you weave them into your story? I always have subplots because my characters demand it. I also think it makes the story more real and in-depth if things are going on between characters that impact and enhance the main plot. It might be a romance with sub-characters or a situation with a car that causes problems to make Renni’s life more difficult, but also helps show her faults and foibles and/or that of other characters.

Do you base any of your characters on real people? My Ed Benson character is patterned off my brother-in-law, with his blessing. But he did go from being a middle-aged white guy to a billionaire inventor who is the spitting image of Morgan Freeman (again, with Ed’s blessing) because that’s what the character wanted.

What kind of research do you do? I do a ton of research. With Bad Carma, I need to have a selection of cars to restore and know what kinds of equipment I’d find and how they’d be used in a restoration shop. For my books, because they all have some historical plotlines, I do a lot of historical research to find out what was happening when the car was being made or the era the romance is set in. I like to know interesting facts that I can use (sparingly!) in the story to give my readers a little tidbit they won’t have known. My favorite tidbit in An Unsinkable Love was that the Titanic had floor tiles that were more expensive than marble – a new product called Linoleum!

Where do you place your settings – real or fictional locations? I generally have settings in the west, around the Four Corners area, because I know those places from spending my life living there or camping and traveling around there. But Unsinkable was set on the Titanic and in the New England garment manufacturing district, so I don’t feel obligated to use any particular place except what works for the story. 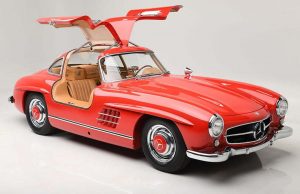 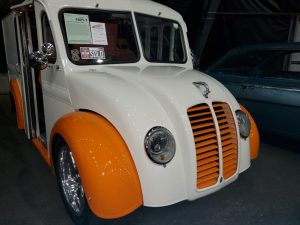 Why did you choose to have a female classic car restorer as your protagonist in the Bad Carma Mysteries? I’ve always loved old cars, especially those pre-1950, and think that perhaps if I had my life to do over, I might have been Renni! Then I could work on the cars instead of just going to as many car shows and auctions as I can and check out the intricate details on the older cars. My research has uncovered hundreds of potential vehicles to use in my stories, and I find more all the time. The Divco delivery van pictured is what Renni drives to shows and is based on one owned by a guy here in town who let me climb around it and lent me a book on the Divco history. Renni hitches it to a custom-made “Jim Dandy” teardrop trailer. I found the plans for the trailer online and was intrigued because it has an ahead-of-its-time swing away hitch, allowing the kitchen area to be at the front of the trailer rather than the rear like most do. The 1950’s era Mercedes Gullwing pictured is just an amazingly beautiful car and will be featured in a future Bad Carma.

Do you have any advice for new writers? Learn everything you can about craft. Join writer groups. Find a critique group. Don’t try to do this alone. It’s more fun, you will be a better writer faster, and you’ll make friends that understand the angst of writing.

Where can our readers learn more about you and where to buy your books?

My books are available at:

As well as most book distributors.