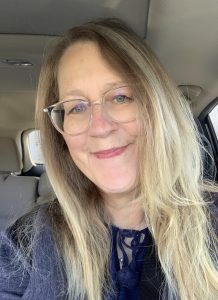 Victoria Kazazian writes the Silicon Valley Murder series. She is at work on a cozy series debuting this fall, The Laughing Loaf Bakery Mysteries, which takes place in the Santa Cruz Mountains.

Victoria’s recent release is Across the Red Sky, Book 2 in Silicon Valley Murder.

When CEO and eco philanthropist Rosalind Mabrey is murdered on a local running trail, the chief suspects are Mabrey’s three company co-founders. Since launching the company as a startup with Rosalind twenty years ago, each of the other founders has a reason for wanting to see her dead. Monte Verde police detective Dani Grasso, a runner herself, takes on the case alongside her mentor, Detective Jimmy Ruiz.

This book follows my debut mystery last year, Swift Horses Racing. The characters in that book came to life and started doing things of their own accord—both good and bad—and they demanded that I keep writing about them. George, I liked your question about whether my protagonist ever disappointed me–yes! One of mine made a huge mistake in my first book, and it was heartbreaking, but it made for a better story. His character arc will continue to play itself out in book 3 of this series, which is due out this summer.

On her first murder case, rookie Detective Dani Ruiz literally steps up her game in Across the Red 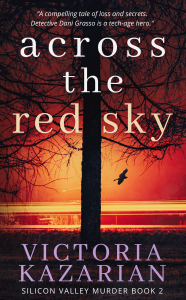 Sky. She’s an avid video gamer who processes cases while playing video games after hours. She’s also grieving the loss of her tight-knit family, who have disowned her for choosing detective work over a job in her Italian grandfather’s grocery store chain.

What brought you to writing? As soon as I learned to read, I was writing. When I was a kid, I’d read a book, then get out a tablet of paper and write my own. Over the years, I wrote fiction secretly while working for tech companies in Silicon Valley as a technical writer, advertising copywriter, then marketing project manager. When I wrote user manuals for a software company, I created characters to use in the examples and developed a narrative through the manuals.

After having kids, I left the tech industry and became a high school English teacher. Teaching literature was one of the best things I could do for my writing. I learned what made a good story. I learned to love a variety of voices and to see the craft of writing in a new way. I also learned to use commas correctly!

How long did it take to write your first book? It took me two years to write my first (unpublished) mystery. Many authors have that starter novel in a drawer somewhere, the one in which they learn structure and work out the bugs in their writing. I learned a lot while writing that first one, but I don’t think it’ll ever leave the drawer. I finished Swift Horses Racing (my first published novel) within a year, then Across the Red Sky took me about four months from start to finish. I learned that I’m a “plantser” when it comes to writing—a “pantser” who plans. I dive in, and the story seems to write itself until I’m about three-quarters of the way through the book. Then I screech to a halt and outline the rest. I need a road map. Sometimes I come up with two different outlines for how the story could end.

Where do you place your settings—real or fictional locations? My setting in this series is Silicon Valley—the south San Francisco Bay Area and peninsula. I’ve created a fictional town on the west side of the valley called Monte Verde. It made me happy that one of my local writing friends thought it was a real town and tried to look it up on a map.

My books don’t go into technology at all; it’s the people in the valley that interest me. I am not much of a techie, but I’m surrounded by them (My husband is a software engineer.) They give me lots of material to write about. It’s a valley full of smart, talented, and very quirky people. Some with too much money and some who don’t have enough money to live on because they’re not working in tech. And there are women fighting to be recognized in the male-dominated tech industry, like my murder victim in Across the Red Sky.

The stakes are high in Silicon Valley for almost everyone. It makes a great setting for a mystery.

Looking to the future, what’s in store for you? I’m continuing my Ruiz-Grasso Silicon Valley Murder series with book 3, A Tree of Poison. The book starts with a home invasion gone wrong in the upscale town of Monte Verde. At the same time, I’m working on a culinary cozy mystery series set in the Santa Cruz Mountains – about a woman who turns in her husband for selling tech secrets and is relocated to a small town under the federal witness protection program. She starts a bakery and is determined to keep a low profile–until the body of a male underwear model turns up on her doorstep. It’s lighthearted, and I’m having so much fun writing it.

Do you have any advice for new writers? Write every day. Take your computer or notepad with you while waiting for your kid to finish soccer practice. Write instead of surfing the net on your phone (preaching to myself here). Write while dinner’s cooking. Write on your lunch break at work. It’s amazing how much you can get done in short bursts. Don’t edit what you’ve written till you’re done writing. Keep reading. Read really good books because that’s the best inspiration for writing one of your own.

Join a writing group or organization. Sisters in Crime has been a big help to me, with lots of resources and very encouraging members. I would not have gotten published as soon as I did without their help. 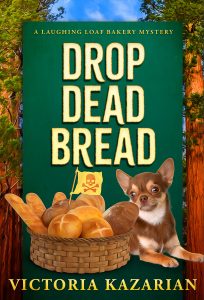 For more info on my books, go to my website: https://victoriakazarian.com/