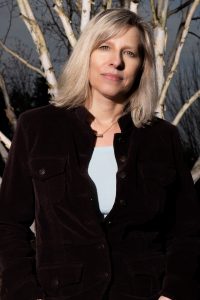 Mary Keliikoa is the author of the multi-award nominated PI Kelly Pruett mystery series and HIDDEN PIECES, the first book in the Misty Pines mystery series. Her short stories have appeared in Woman’s World and the anthology Peace, Love and Crime: Crime Fiction Inspired by Music of the ’60s.

A Pacific NW native, she spent many years working around lawyers. When not in Washington, you can find Mary with toes in the sand on a Hawaiian beach or making plans to travel abroad. But wherever she goes, she’s always plotting her next murder—novel, that is.

HIDDEN PIECES, first in series: A small-town sheriff debilitated from the loss of his child and marriage answers the call for one last case, a “runaway” teen; but when it’s clear the girl has been abducted and ties to a tragic cold case emerge, he must confront his own ghosts before another child is lost.

Thank you so much for having me on your blog today, George! I’m excited to be back. I was here last when DENIED, the second book in my PI Kelly Pruett mystery series, had just come out. Since then, my third and final book in the series, DECEIVED, was released in May, and HIDDEN PIECES, the first in the Misty Pines mystery series, just published.

HIDDEN PIECES means a lot to me for several reasons, but probably the most significant was that it is loosely based on a crime that happened in my hometown in 1979 when two girls went out walking and one didn’t come home. I was drawn to the idea of exploring what happened to the survivor and how one would process that, or not process, the grief of that traumatic experience—especially if the victim was a sibling. While a fictional account, it explores how grief and trauma can have lasting effects, not only for the survivor but also for the cop who felt a failure for not bringing that child home. And it’s all woven into a current abduction. Let’s just say there will be many connections to the past.

What’s the most challenging thing about writing characters from the opposite sex? Hidden Pieces 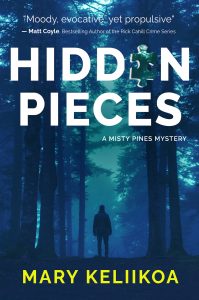 was my first time writing a male protagonist, and I had a bit of a learning curve in working out his thought process, his abbreviated dialogue, how he processed information, and grief of events that have happened in his present and past. Those elements were the biggest challenge. But I tried to approach Jax from the perspective that regardless, many emotions are universal. And while men and women communicate differently, what drives their need for communication is universal. It was definitely fun exploring the full range of differences and commonalities, and I hope to continue to write Jax and other male protagonists in the future.

Do your protagonists ever disappoint you? Such a great question and the answer is no. As a storyteller, I feel my job is to listen to the story the characters want to tell. Sure I have an idea of where I’d like them to go, and I have the case in mind they’re to solve. I even think I know the arc I’d like them to take. But how they get there comes out as I write. And to be honest, they often lead me on a path that is far more interesting and fun than the one I had planned for them.

Where do you place your settings—real or fictional locations?

I have generally kept my stories in the Portland area or used Portland as a reference point. In my PI series, it was set in Portland. In my new series, Sheriff Turner was a Portland homicide detective but came to the fictional small coastal town of Misty Pines.

I often will use the fictional town when I want to reference things in the area, but I want the creative license not to be overly specific. For example, Misty Pines is really a compilation of the Hammond, Warrenton and Seaside, Oregon areas at the northern coast. So I would say even when I do use fictional, I have generally based them on places I’ve been to or know fairly well. In Hidden Pieces, I lived in Hammond for many years as a kid, so that area was the perfect setting for the novel.

What are you currently working on? The second book in the Misty Pines series, DEADLY TIDES, has already been drafted, so I’m currently working on edits for my agent on a domestic suspense novel and starting a standalone where the main character will be a bit of a vigilante. I’m very excited about this new project. I’ve generally written investigator-type protagonists, and this one will be full of moral ambiguity. So she’s going to be a lot of fun to write!

Do you have any advice for new writers? Continue to hone your craft either by taking classes, reading books, or finding a group of other writers you can bounce ideas off. Above all, write. Sometimes you can get caught up in thinking you need to do things a particular way, and nothing beats simply sitting down and getting words on the page. Don’t let anyone define what that means to you, whether it’s a journal, a poem, a short story, or a novel.

And second, find your community. I’ve really enjoyed the connections I’ve made on this journey, and I encourage others to do the same.

Looking to the future, what’s in store for you?

Lots of writing is in store. I am finalizing the second book in the Misty Pines series, which will be out in the fall of 2023, continuing to edit my domestic suspense, and starting on my next project in the next few weeks. I’ve always said as long as I’m having fun, I won’t slow down. And it’s safe to say I won’t be slowing down anytime soon. 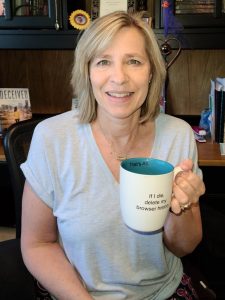