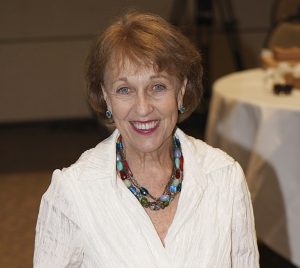 Deb Richardson-Moore is the author of a memoir, The Weight of Mercy, and four mysteries, including a 2021 Killer Nashville Silver Falchion finalist, Murder, Forgotten. All have been published by Lion Hudson of Oxford, England.

Deb is a former journalist and minister to homeless parishioners in Greenville, SC. She tells the story of her mid-career switch in The Weight of Mercy, a memoir that reveals the traumas and rewards of dealing with addiction and poverty. It has been studied at Harvard and Duke Divinity Schools.

Murder, Forgotten is a stand-alone in which an aging mystery writer is losing her memory. When her 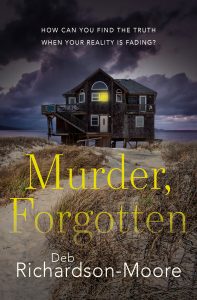 husband is murdered in their beachfront home, her grief is mixed with panic: Could she, deep in the throes of a new plot, have killed him? Upcoming in 2023: Deb’s latest work, Through Any Window, has been accepted by Red Adept Publishing in the U.S. Set in a gentrifying area of a vibrant Southern city, tensions are already high between old-timers and rich newcomers. When a double murder explodes, police must determine whether its roots are personal or the rocky result of urban renewal.

Do you write in more than one genre? After a 2012 memoir, I have stuck to murder mysteries.

What brought you to writing? A lifelong love of reading and a 27-year career as a feature writer for a newspaper. After leaving the demands of daily deadlines, I was finally able to write books.

Where do you write? What, if any, distractions do you allow? I write in my cheerful sunroom, with five uncovered windows and loads of happy artwork and family photos. At this point, I’m not in a race to see how many books I can produce! I do allow distractions – coffees and lunches out, volunteer work, speeches, travel.

What are you currently working on? I’m in the editing process of a mystery tentatively titled Through Any Window, which is set in a gentrifying neighborhood in a Southern city. People in new mansions live side by side with people in boarding houses and a homeless shelter and can see their neighbors’ lives through their windows.

Who is your favorite author? It’s a toss-up between Joshilyn Jackson and Jodi Picoult. I’m amazed at the breadth of their work.

How long did it take you to write your first book? In all, it probably took a year. When I was halfway through, my board of directors gave me a sabbatical to finish it. Without that nine weeks, I’m not sure I could have done it. I was in a deathly fight with my inner critic.

How long to get it published? Another three years. To my surprise, a publisher in England picked it up, then agreed to publish my fiction titles as well.

Do you ever kill a popular character? If so, what happens to your story? Yes, I did this once. ( I won’t say which book!) My writers’ group got into a major argument over it. One member thought it was breaking a contract with the reader. Others liked the surprise of it. I loved it because I believe it allowed the story to veer into a deeper, sadder place.

Do you have subplots? If so, how do you weave them into the novel’s arc? You have to have subplots. In Through Any Window, one subplot whirls around the tensions of rich and poor living side by side, and another concerns a young man who recognizes a property where he once lived. The subplots give rise to possible motives for the murders.

Do you base any of your characters on real people? I wrote my three-volume Branigan Powers series about a homeless man who helps a news reporter (Branigan) solve murders. Because he glides through their town virtually unseen, Malachi sees and hears things that other people don’t. I based him on a dear friend, a homeless man who attended my church for 15 years. As for Branigan herself, I’m sure she has aspects of me, as does her friend, Liam, a pastor in a homeless ministry. (I also wrote my dog, Annabelle, into Murder, Forgotten).

Do you outline, or are you a pantser? I don’t know that term! But I don’t outline, so I guess I’m a pantser. I think it’s more exciting if you can constantly surprise yourself. I had so much fun writing Murder, Forgotten, because I couldn’t wait to see how it turned out. It was quite literally almost as much fun as reading a twisty thriller.

Where do you place your settings—real or fictional locations? I mix them all together. The Branigan Powers series was set on my grandparents’ farm in northeast Georgia, but I plopped it near a city that doesn’t exist. In each book, Branigan usually travels to the South Carolina coast.  Murder, Forgotten was set on Sullivan’s Island, SC, and the eastern coast of Scotland. I mixed actual villages and streets and restaurants with fictional houses. Through Any Window is set in fictional Greenbrier, SC, but I draw on much of what is going on in Greenville — and any growing American city.

What is the best book you have ever read? Oddly, not one by my favorite authors. I’d have to say Lionel Shriver’s We Need to Talk About Kevin. Or possibly Ira Levine’s Rosemary’s Baby. I get shivers thinking about both.

How do our readers contact you or learn more about you?