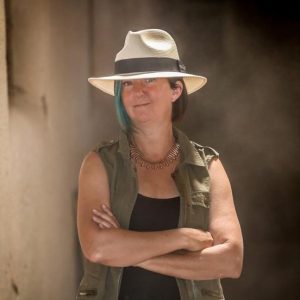 Sonja Dewing uses her adventurous spirit and travels to inspire her short stories and novels. She’s worked as everything from a waitress in a haunted Inn to an Instructional Designer for an unnamed government agency.

Now she’s a full-time author and helps other writers through her business, The Women’s Thriller Writers Association. She was nominated for a Silver Falchion for Best Action/Adventure and won second place from the NM Press Women for her novel Castoffs of the Gods and her short story A Glass Mountain. Her published novels include Toy of the Gods, Gamble of the Gods, Castoffs of the Gods, and, coming soon, the final book in the Idol Maker series, Relics of the Gods. 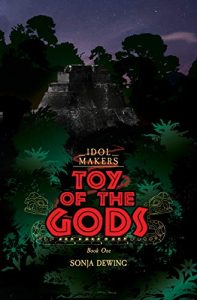 You can start the series with Toy of the Gods – Leslie needs a break. Instead, she’ll have to face down an Inca god and drunken monkeys. Get your copy here: https://www.amazon.com/dp/B07P71ZKGB?tag=sdewing2309-20

What are you currently working on? I never just have one thing going on. I think that’s the curse of the 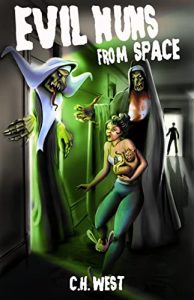 over enthusiastic creative, perhaps, but I love being busy. I’m finishing book 4 in my series Relics of the Gods, and I’m producing a podcast – The 5 Minute Author, that’s all about writing and self-publishing tips, and I’m producing my first audiobook. I decided to try a short story audio first. It’s a short horror I wrote under a pen name called Evil Nuns from Space.

How do you raise the stakes for your protagonist? At some point in my book, I ask myself, what’s the worst thing that can possibly happen to my protagonist besides death? That question has always led to some fun and interesting twists. Like in Castoffs of the Gods, Leslie Kicklighter is exhausted from traveling the Amazon river all day but finds herself stranded, away from her friends, and has to find a way to get back to safety. It’s when we truly test our characters that we see what they are capable of.

Do you outline, or are you a pantser? I call myself a plantser (no – not misspelled). Before I start drafting a book, I have very specific scenes in my head. I’ll put those down as a rough outline, then fill in the rest of the story as I write.

Where do you place your settings—real or fictional locations? All of my locations are fictional but based on real locations. When I was in the Amazon basin, I stayed in an eco-resort. I used that resort as my fictional resort in Toy of the Gods. My second book is based in New Mexico, where I live. Then book three is based in the Amazon again, and book four will be in New York City and Iceland, some of my favorite places.

What kind of research do you do? The best research I ever did was to travel to the Amazon in Peru. This was after I had written the draft of my first book. So when I came home, I spent a month rewriting the novel with the jungle as an antagonist. I learned so many things that I would never have gleaned from watching a YouTube video or reading about it. For my current book, Relics of the Gods, I traveled to New York and visited all the places that show up in the book.

How long to get it published? It was a long road for my first book. In search of an agent, I had several male agents tell me no one would read an adventure with a main female character. And I believed them. Until I finally changed my mind and went with a small publisher. I needed someone to tell me my book was good enough to publish. But then two things happened. A stranger gave me a 5-star review on Amazon, and I found out my publisher had never fully read the book. That’s when I took the book back and self-published it.

Do you have subplots? If so, how do you weave them into the novel’s arc? Absolutely. Every character has their own goals, which are often not in sync with other characters. That’s what creates my subplots. For example, in Castoffs of the Gods, Leslie is in the Amazon to find and rescue her friend, AJ is there to find out more about her magic powers, Alex is there to steal an artifact, and others are there for other reasons. Each of those goals will conflict with the other and create subplots. I weave them in through the actions of the characters.

Do you have any advice for new writers? Yes. In your early writing career, please don’t give your writing to friends or family. They’ll tell you two things because they don’t understand that writing is a process (aka, like any job, it takes time to get it right). Either they’ll be really nice and tell you they loved it, or they think they need to be honest and tell you it’s terrible (which might discourage you from ever writing again!). Instead, find a review group of other writers who can share constructive criticism to make the story and your writing better.