POSOH is a partnership between UW Madison researchers, The College of Menominee Nation’s Sustainable Development Institute 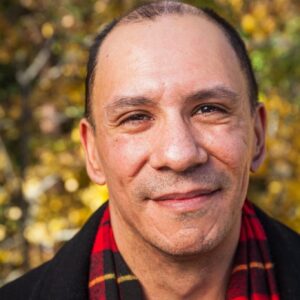 Posoh, Justin “Jud” Gauthier here, currently serving an indeterminate sentence chained to an accursed desk where I try to not write bad screenplays. Not to write bad screenplays? I don’t know. Great start, Jud. Wording aside, I discovered my love of screenwriting at the tail end of my dirty thirties. I’m a lifelong cinefile, and I used to believe my first movie memory was seeing Bladerunner in a theatre with my parents. I turned six in ’82, and it’s an indelible memory, the spinner flying through that futuristic, cyber-punk downtown L.A., the Geisha, forty-stories tall, demurs on the side of a skyscraper. That moment broke reality for me. I wanted to crawl into that screen. To be a part of whatever that world was. I’ve been trying to break reality ever since.

It turns out I have an earlier movie memory that places my first theatre-going experience somewhere in January ’81. At four years old, I remember it was cold, and we’d parked far away from the little Crescent Theater in downtown Shawano, Wisconsin. There was a bit of a crowd, mostly native, to see the premiere of Windwalker. I remember the heavy, his face smudged with black and white paint, stalking through the snow. I remember mom and dad on the drive home talking about the film in a way only indigenous activists who grew up through the turbulence of the sixties and seventies could. “Why can’t they get it right?” “It’s something anyways.” I fell asleep and probably had a nightmare about the Fish Head Song video from Saturday Night Live. It really upset me at the time, not to mention how sorry I felt for Mr. Bill. I had a lot going on at four.

Since we’re all the way back in January 1981 and I’ve shared a sliver of the influence pop culture has had on my screenwriting style, let me offer a more expanded view as we travel through the 80’s, the ’90s, and into the early aughts, hang on:

October-ish 2001: A couple of friends and I decided to write a feature-length comedy about our experiences attending the Flandreau Indian School together in the early nineties. We worked hard for the first few months, then it took close to two years to finish. We ended up with a 100+ page script spread across several interesting media choices: 3.5” floppy disk, Mead notebook (no cover), yellow legal pad, various napkins, and loose papers. It was a comedy, I guess. We laughed. Looking back, it was too rough-hewn. We weren’t screenwriters though we each had flashes. I enjoyed the process, especially working with friends. Of course, that old script is lost now, spread to the winds of time. And for the best, I think, considering our title, “Tipi Creepin’.”

2015-16 to present: After being accepted as a soil science major at the University of Wisconsin-Madison in 2011, I graduated in 2015 with a BA in Creative Writing, go figure. Soon thereafter, I heard about the Lo-Rez MFA program at the Institute of American Indian Arts and applied as soon as possible. I was in a real creative lull, as evidenced by my YouTube channel featuring a “life” hack video on preparing Mac and Cheese using a beurre manié technique for the cheese powder.  It’s incredible.

IAIA is an amazing wellspring of creativity and was a great course correction for me. I found screenwriting through camaraderie with the screenwriting students. I changed majors from short fiction to screenwriting on my first day at the program. In the intervening years, I’ve been developing my skills by tackling as many varied genres and forms of screenwriting projects as possible. I also stay in touch with my screenwriting cohort and instructors, a real Murderer’s Row if I ever saw one.

In 2019, I was honored to land the role of Larry in the 1491’s play, “Between Two Knees” at the Oregon Shakespeare Festival. I’d always aspired to acting but never thought I’d have the opportunity. It’s easily the most rewarding creative endeavor I’ve been involved with to date. It was a lot of hard work in memorization, timing, and choreography, but man, oh man, what an amazing script, cast, and crew. I’m optimistic for the future of theatre in a post-vaccine world, so keep an eye out for Between Two Knees coming to a theater near you!

Early 2020, I sold a romantic comedy short named “Adelina” to Meet Cute for their audio podcast series. It was amazing to hear the pages I’d worked on for weeks performed by talented voice actors and foley artists. Currently, I’m partnering with a fellow writer on developing a drama series.

You can reach me at: