I met Jon when I inquired about the low-rez MFA program at the Institute of American Indian Arts (IAIA). Five days later, he had me admitted. During the program he wasn’t just the director, he was a mentor and friend to every student. When I had a serious medical issue that prevented my attendance one semester, he created a remote program that allowed me to complete my requirements and graduate with my cohort.

Jon, I can never thank you enough for your compassion and friendship. Yôotva  – Thank You, George 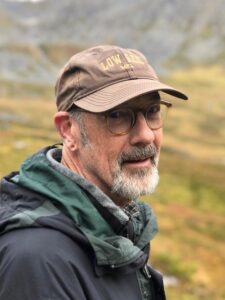 My name is Jon Davis. I was born in New Haven, Connecticut, and grew up in the nearby town of Orange. After graduating high school, I worked for eight years, primarily as a mason and a warehouse manager, before attending the University of Bridgeport. I went on to earn my MFA in Creative Writing from the University of Montana. I taught for 30 years, 28 of them at the Institute of American Indian Arts. In 2013, I founded the IAIA low residency MFA in Creative Writing, which I directed until my retirement in 2018. From 2012-2014, I served as the City of Santa Fe’s fourth Poet Laureate. I have published seven books of poetry, one book of poetry in translation, and six chapbooks of poetry.

My new book of poetry, Above the Bejeweled City, will be available from Grid Books on September 15. Here’s the official book description:

In his seventh poetry collection, Jon Davis exhibits the range and mastery that is the result of fifty years of study, teaching, and practice. Above the Bejeweled City opens and closes with homages to Federico Garcia Lorca’s dream-struck ballad “Romance Sonámbulo.” In between, he inhabits what the philosopher Maurice Merleau-Ponty calls the “inexplicable existence” that marks our passage here on Earth.

Part absurdist, part satirist, part tender correspondent, Davis writes in the slipstream of writers like Joyce, Beckett, Parra, and Plath. In an age that calls out for hopeful verse, Above the Bejeweled City offers, instead, a treatise on defeat and despair—and on how letting go is a way of holding on. 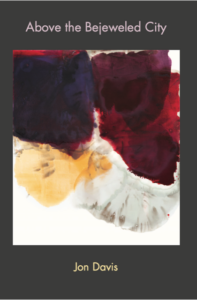 I think of it is as the third book in a tryptich with my previous two books, Improbable Creatures and An Amiable Reception for the Acrobat. All three books were written more or less simultaneously.

Do you write in more than one genre? I write in many genres—poetry and short fiction primarily, but I’ve also written screenplays, plays, creative nonfiction, literary criticism, satire, and songs. My first published writings were record reviews, and for a while, I was the music critic for a weekly newspaper in New Haven, Connecticut. I also write poetry and perform as Chuck Calabreze, an alter-ego of sorts that I developed in the 90s.

What brought you to writing? I was always an avid reader, and, for some reason, when I was in third grade, I suddenly wrote a 23 page story, the hero of which was a young Navajo man who had stumbled across a bag of money—I think some thieves had stashed it. The story followed him as he was pursued by both the authorities and the original thieves. I didn’t know any Navajo names (I was an eight year old living in Orange, Connecticut), so I borrowed an exotic-sounding name I’d seen in the newspapers for my hero: Tse (borrowed from Mao Tse Tung!). Four years later, I began writing imitations of Ralph Waldo Emerson and Henry David Thoreau. (I read both when I was 11 years old.) I’d wander the woods with a journal (I mean, the notebook actually said “Journal” on the cover!), and I’d scribble down my romanticized observations of nature. I still have one of those journals. Trust me, nobody is going to see it.

But I didn’t think of writing as something one devotes oneself to until my 7th grade English teacher talked about James Joyce and his notion of the literary “epiphany. ” I think she defined it as the writer “seeing into the heart of things.” I remember thinking, “I want to do that!” The same teacher also made me stay inside during recess when I didn’t complete my assignments on time (which was most of the time). As “punishment,” she’d make me memorize poems. I remember being given John Donne’s “No Man is an Island.” I thought it was the best punishment ever.

It took a while before I came to poetry myself, though. What finally brought me to writing poetry was a dirt bike accident when I was 18. I was riding alone on a tight dirt track I’d carved out of the woods. It was the first cold morning in November, 16 degrees. I slid hard into the berm on the first turn, but instead of sliding around the turn, the tires bounced off the frozen berm. The bike stopped dead and fell on my calf muscle. I pulled the bike upright, got back on, and rode home. I figured I’d torn my calf muscle (two weeks later, I went to the doctor, and he confirmed my diagnosis), so I hopped up the stairs, sat at my desk, thought, What am I going to do now?—and started writing poems.

I taught myself by reading the generation ahead of mine, so Richard Hugo, Norman Dubie, and others were my teachers at first. In 1977, I wrote a letter and sent some poems to a poet named Dick Allen, whose book I’d found in the mall book store and who taught nearby, at the University of Bridgeport. Dick loved what I’d sent him and invited me to take any course I wanted. The one that fit into my schedule was a 300 level creative writing class. At the first full class, four of my poems appeared at the end of the mimeographed handout. After he’d led lively discussions of the other work on the handout, my poems came up for discussion. Nobody raised a hand, nobody spoke. Dick let the silence continue. He passed the time fiddling with his glasses, poking through papers in his briefcase. Meanwhile, I was thinking, I’m in the wrong class, I need to give up this crazy idea of writing poems, etc. Finally, he stood up and addressed the dumbfounded class. “These poems,” he said, “are instantly publishable in any journal in America.” He went on to tell the class what he knew about me—I was a construction worker, I’d taught myself to write these poems—and the various virtues he saw in my poems, then class ended. I talked to him briefly after class, then drove the twenty minutes home in my battered 68 Buick, sobbing all the way.

Where do you write? What, if any, distractions do you allow? I write wherever I am and write longhand, on a computer, or on my iPhone. Sometimes I record on my iPhone. When I’m writing as Chuck Calabreze, I shout and growl lines and either record them or scribble them down immediately after growling them. I often drive with a notebook beside me and scribble poems (mostly without looking) across the pages. I keep a notebook beside my bed for those times I wake up having dreamt part of a poem. I can write poems no matter what’s happening around me. I’ve written poems in emails and group chats, on Facebook messenger, and in text messages.

Tell us about your writing process. As you might surmise from my previous answer, I don’t have a writing process. In fact, I don’t believe in the idea of a “creative process”; experience tells me poems and stories happen in thousands of different ways. So my approach is to stay open and alert and attentive to the wild world and to my own wildly associative brain. I write notes everywhere, let every glimpse or whimsy, every hurt or big idea, every cluster of words or silly thought, every fleeting buzz or bing into my awareness. I’m apt to drop everything and start writing. Or at the very least, text myself a title, a line, a part of a poem or story or song. I have this idea that the composition / revision divide (process?) is an artificial distinction that was produced by writing workshops. For me, it’s all composition—one fluid (okay, sometimes not so fluid) movement. I suspect that relying on a process will get you processed poems, not quite real poems the way processed “cheese food” isn’t quite cheese.

What are you currently working on? Even before I’d completed Above the Bejeweled City, I was deep into the next collection—by deep, I mean deep for a poet: I have about 30 pages. Some of these poems will appear in State of the Union, a chapbook coming from Finishing Line Press in 2022.

Who’s currently your favorite author? I am currently reading The Glass Constellation by one of my favorite poets, Arthur Sze, whose innovations, developed over fifty years of poetic practice, reveal an entire worldview.

Do you have any advice for new writers? For poets: Imagine what the perfect poem looks like for you, then spend your life trying to write it. Ignore fashion. Ignore equally failure and success.