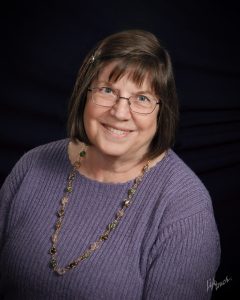 Kaye George, an award-winning novelist and short-story writer, writes cozy and traditional mysteries and a prehistory series, which are both traditionally and self-published: two cozy series, Fat Cat and Vintage Sweets; two traditionals featuring Cressa Carraway and Imogene Duckworthy; and the People of the Wind prehistory Neanderthal mysteries,  Over 50 short stories have also appeared, mostly in anthologies and magazines. She reviews for Suspense Magazine and writes a column for Mysterical-E. She lives in Knoxville, TN.

Do you write in more than one genre? Kind of, but not really? Most of my writing is mystery, but I work in different sub-genres. I’ve had contracts for two 3-book cozy series and have a couple of other series that are more traditional. And my prehistory series, which doesn’t really fit anywhere, but I call it historical if I have to slot it somewhere. I have done a few horror short stories, but not many.

What are you currently working on? I finished up a psychological suspense novel, which is a huge departure for me. I read a lot in the genre and have wanted to write one for some time. So, I did it! It’s taken me a long time because I lay it down, do another project, and then return to it. I hope to be querying soon. It would be ideal if I could snag a new agent with this since I’m between agents.

Has an association membership helped you with your writing? I have to give a lot of credit to the Guppies chapter of Sisters in Crime. The critique groups, manuscript swaps, and especially the subsidized online classes have given me so much! I gave back for a few years, serving as treasurer, then president. I’m back to just being a member now—very restful.

How long did it take you to write your first book? Not long for the very first one, but that one will never see the light of day. I started on one that got me published after working on a specific one for about ten years. It took about a year to write CHOKE, my first published book, because, by that time, I had learned how to write a mystery. The ten-year book did get published, but the publisher failed, and it’s now languishing until I can find a new home for it. That one was called EINE KLEINE MURDER, but I’d like to change that title if it has a rebirth somewhere.

How long to get it published? The one I worked on for ten years got published a couple of years after the one I wrote in frustration at not getting published in 2011. That one was my first one, CHOKE. However, I jumped at a publisher when I should have been a little more selective. I ended up taking it back and self-publishing it a year later, in 2012. EINE KLEINE came out inf 2013.

What kind of research do you do? For regular books, I research the geography and weather of the area, sunset and sunrise times, too, at least. A whole lot more on occasion for a specific project. I often base a fictitious town on a real one, but I’ll use the real things about the real town. Of course, I research all my murder methods, police procedures, and body trauma. For police and forensics, the Citizens’ Police Academy I took in Austin was a valuable experience.

But for my Neanderthal series, tons and tons and tons of research. I try to keep up with new theories and discoveries, and there have been many of those over the past few years. Fans of that series have been wonderful about keeping an eye out and informing me of new developments, too. It takes me a full year to write one of those. I can write a book in other sub-genres in 9 or 10 months. I’m not a fast writer! 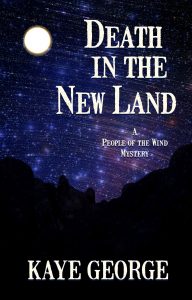 Anything else you’d like to tell us about yourself and your books? The long-awaited third Neanderthal mystery, DEATH IN THE NEW LAND, is finally out on July 10th. I’m very excited to have finally finished this!