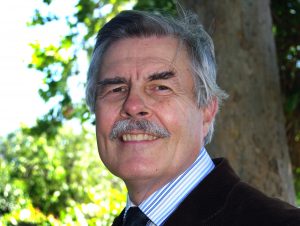 The title of his latest book is Florida Grand Theft & Other Tales: Crime and Sci-fi Short Stories.

John G. Bluck is the author of five books, some in the crime/mystery genre and others science fiction. He worked for thirty years for NASA and retired as a public affairs officer. Prior to that, he was the daytime crime reporter/photographer for WMAL-TV (now WJLA) in Washington, D.C. During the Vietnam War, Bluck was an Army journalist at Ft. Lewis, Washington.

Another of his recent books, Death in the Holler, earned praise in a BookLife review printed in the January 11, 2021, issue of Publishers Weekly magazine. “For Southern murder mystery fans, this whodunit and its heart-of-gold protagonist will hit a bullseye. Murder, gangs, and black-market marijuana run rampant in this testosterone-filled thriller. . . . Bluck’s mystery keeps readers quickly flipping the pages with short, fast-moving chapters.”

Tell us about your most recent book. My latest book is Florida Grand Theft & Other Tales. It’s a collection of sixteen crime and science fiction short stories; some are strictly fictional crime stories. Others are solely in the science fiction genre. Many of the yarns combine both crime and sci-fi genres. Florida Grand Theft was released on October 4. The first image below is for the paperback and the second is for the eBool. 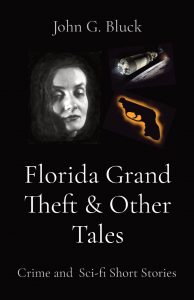 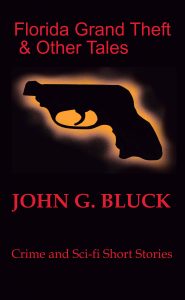 I began writing a couple of the stories as long as fifteen years ago when I was working at NASA. Over the years, I edited and revised them numerous times. One of those stories is the “DNA of History.” In it, ant-sized extraterrestrials visit a young boy, affecting his entire life. A second sci-fi story that I began developing a long time ago is “Adventures in Time.” In this story, an astronaut transmits a message as his ship careens toward a black hole.

I dreamed up other stories only months ago. That’s obvious when you read one of them, “Big Brother’s Bracelets,” which is related to the current pandemic and Covid-19. In this story, a feuding couple has to adjust their lives.

In the first story in the book, “Florida Grand Theft,” a young woman short of money tells how she’s tempted to steal a purse. In “Death by Snub Nose,” a hobo is accused of murder. These are among the crime and sci-fi stories I wrote recently, as is “Buzz.” Buzz is a robotic bee who’s an undercover agent.

Why do you write in more than one genre? I spent much of my life in a career path that’s linked to both crime and science-fiction. When I was in the army, I wrote news stories for an army newspaper and read army news on a couple of local radio stations.

After that, I worked a few years in Washington, D.C., as the television daytime crime cinematographer for WMAL-TV (now WJLA). I mainly covered homicides and bank robberies. Naturally, I covered other stories, too, including sports, politics, and even Watergate. I was in a pool of about six or seven still and motion picture photographers who filmed the submission of President Nixon’s letter of resignation.

Then NASA hired me to be a documentary producer. I saw many fascinating things at NASA that were true, but which might as well have been science fiction. I saw huge rocket engines; walked under the Space Shuttle; peered through telescopes, and wandered through laboratories, machine shops, wind tunnels, as well as many other locations.

When I explored NASA and filmed news for TV, I met many kinds of people. Whether they were in bad or happy situations, they taught me about human nature. Covering news “on the scene” in city streets and later working in science and engineering environments gave me a myriad of potential story ideas related to both crime and science.

How do you create your characters? Lately, I’ve been consulting a psychology book to try to shape some of my characters’ personalities so that they are vastly different from each other. This can lead to conflict and drama.

I don’t try to dictate what a character will do all of the time. I like to put characters with different personality traits into the same room or location. I begin to write dialogue rapidly. I permit the characters to talk, to say what they want. This is hard to describe, but it’s as if they wake up and begin to speak. I simply type what they’re saying. That’s why I say I don’t try to make the characters do or say what I want them to say.

However, there are times when something specific has to happen—a climax, a turning point. Then I might dictate that a tree will fall, a ship will sink, or a fire will erupt. The characters then have to react to the situation based on who they are and their personalities, which I have assigned to them. Sometimes, that personality changes when a character starts to act and come alive. I’ve found that if I “listen” to my characters, rather than try to shape them too much, the people who populate my books are more realistic, more human.

Do you outline, or do you write as you go? When I design a novel (plot it), I like to outline “sort of.” That is, I use the Act I, Act II, and Act III format.  I know where the climax is supposed to be. I write the beginning and the end first and perhaps the climax, and then I fill in the middle of the story. Each scene is like a bubble or a block. I note what “should” happen in a scene.

But as I go along, I let the characters have a lot of freedom, and they may take me off on a tangent. Also, sometimes when I’m writing, a character will just pop up. This is where the “sort of” comes into my writing process. I then have to decide if an unexpected path taken by a character is good or is merely a diversion that takes the story too far off course.

I like to work in this hybrid—mostly planned—but freewheeling kind of a way.

What’s your next book going to be about? Its potential title is Murder at NASA. Luke Ryder, the protagonist of my last mystery novel, Death in the Holler, is called into work undercover to solve a cold-case killing at NASA Ames Research Center in Silicon Valley, where I worked last at the agency. I’m quite familiar with the Ames campus, which some Hollywood producers have called a great location to make a movie. I doubt that Ames would ever be the set for a major movie, but the place has so many good locations for me to use in a novel. I’m almost salivating; I’m ready to completely plot my ideas and turn the characters loose at Ames.