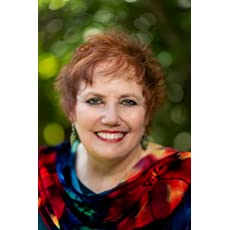 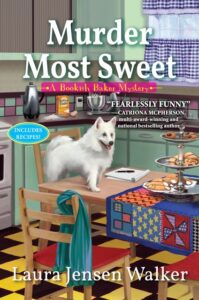 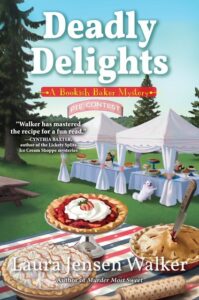 After entertaining on the quilt lecture circuit, we created the new genre of quilting science fiction

It’s great to be part of your blog world, George! Like you, I spent the better part of my life in other fields. While I began college as a poetry major, I 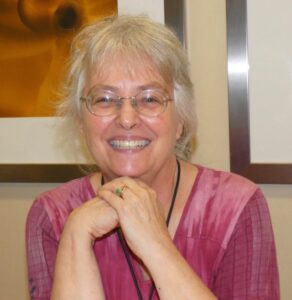 graduated with a degree in Russian Political History. My intent was to join the diplomatic corps. But a frank discussion with my dad about life as a civil servant pushed me in another direction. I’ve been a secretary, a teacher and worked in human resources in the biotech and financial industries. My husband’s job brought us to California just in time for the dot-com bust. For many years I intended to return to the working world, but then I met Ann Anastasio, who introduced me to quilting. Together we created Broken Dishes Repertory Theatre, a quilting vaudeville troupe. We wrote one-act musical comedies about quilts and the women who make them. After entertaining on the quilt lecture circuit, we created the new genre of quilting science fiction with Death By Chenille, When Chenille Is Not Enough, and The Chenille Ultimatum, novels about quilters saving the world from aliens disguised as bolts of beige fabric. We thought The Chenille Ultimatum would be the last in the series, but then a friend said we absolutely had to write The Captain and Chenille because it was such a great title. We would have appreciated getting a suggestion for a plot as well, but you work with what you’ve got. Ann has lived in New Mexico since before When Chenille Is Not Enough was published, so we are used to writing long distance, but the pandemic has slowed our progress. We both joined the army of mask-makers in our home states when the need arose, for instance, which made my already messy sewing room a complete disaster. A lot of my creative energy has been shifted from writing to getting my quilting projects under control.

Where do you write? What, if any, distractions do you allow? My husband is a true technophile, so we have computers everywhere. My favorite is in a corner of the family room. It’s close enough to the kitchen to get tea and snacks but far enough away from the phone that I can ignore it. It’s adorable that you ask which distractions I “allow.” Distractions are worse than teenagers. Not only is there no arguing with them, you can’t even threaten to take away their car keys. HOWEVER, if I’m brutally honest, the time that distractions get the upper hand is when I’m uncertain where to go next in the scene I’m writing. 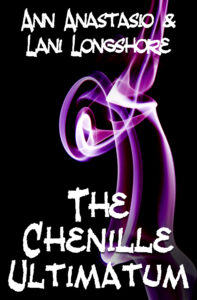 Has an association membership helped you or your writing? Absolutely! The California Writers Club has been a godsend. Ann and I were entertaining a quilt guild in San Jose and casually mentioned we were writing a novel. One of the women pulled out her CWC business card and suggested finding a branch nearby. That happened to be the Mt. Diablo branch, where Igal Levy had just started a critique group. Jack Russ, then the president of Mt. Diablo, established a committee to create what became Tri-Valley Writers. I joined Tri-Valley Writers after my term as Secretary to the Mt. Diablo branch ended. I joined two critique groups with this branch, which gave me the accountability I needed to finish the manuscript of Death By Chenille, which we published on Smashwords after hearing a presentation by Mark Coker, CEO. I’ve also published short stories in almost a dozen anthologies that I heard about through Tri-Valley Writers and a short story on BookTrack after one of their representatives gave a talk to the club.

Do you base any of your characters on real people? Yes, or at least parts of real people. Ann and I will combine the traits of people we know. We try to avoid having too much reality in our characters. Although we write cozy science fiction (meaning even our villains have a soft side), we don’t want anyone to say, “Hey, that’s me” – and not in a happy way.

Where do you place your settings—real or fictional locations? Some settings are real, and some are fictional. Clearly, the alien planets are fictional, but even those planets have elements based on places we’ve known on Earth. All the quilt stores in our books are based on real stores.

Do you have any advice for new writers? Don’t let the perfect be the enemy of the good. Becoming a writer means being a life-long learner. Promise yourself that you will learn more and be a better writer for the next project, then submit your work for publication. It doesn’t matter if you don’t win the contest, or land the agent, or make the best-seller list with your self-published book. What matters is that you’ve tried. If you are convinced that this is the best work you can do at this moment, then do what you can to get it in front of readers. No one can tell your story like you can, so give readers a chance to hear your voice.

How do our readers contact you? Your website, blog links, any links you want to be posted? I post twice a week on Lani Longshore’s Blog at lani.longshore.wordpress.com. Mondays are about my writing life, Wednesdays are about my quilting life. There are also posts about the flowers in my garden when I haven’t accomplished anything either at the computer or in my sewing room. The entire Chenille series can be found as e-books on Smashwords.com. The Chenille Ultimatum is also available in a print edition on Amazon.com.