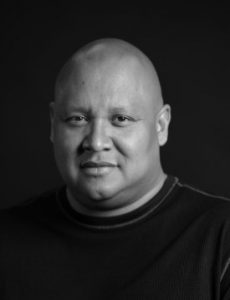 Brian Lush is a music journalist based in Albuquerque, New Mexico. He is the founder of Rockwired.com and was the founding editor of Rockwired Magazine, which ran from 2012 through 2017. An enrolled member of the Yankton Sioux Tribe in Southeastern South Dakota, he studied Creative Writing at the Institute of American Indian Arts in Santa Fe, New Mexico. He received his B.A. in Creative Writing from the University of New Mexico.

With a war between Russia and Ukraine and a lull in a global pandemic, who wants to get lost in a tale of a 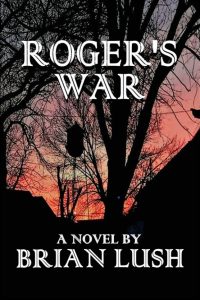 world gone mad? It wasn’t exactly the kind of territory that writer Brian Lush wanted to mine in what would become his first novel, Roger’s War.

“This was where the muse led me,” says Lush. “The roots of his dystopian coming-of-age story stemmed from the nightmarish events of the 2018 Stoneman Douglas High School shootings and the belief by some that teachers should be armed. “It was pretty wild to imagine high school teachers being armed and yielding that kind of control over kids. Children! Back then, I thought I had at least a short story on my hands. However, life got in the way, and I had other commitments, and the story never saw the light of day. The idea was in the back of my head and then snowballed. The pandemic, and then this little story I had in my head about the abuse of power became this huge novel on how one young boy survives.”

Roger’s War is a tense and frantic narrative that illustrates the life of a young man coming of age in a frightfully repressed society. The country once known as the United States of America has descended into a second civil war. Emerging from the devastation is a rogue nation called Heartland – a totalitarian theocracy under the rule of a maniacal, self-proclaimed prophet known simply as Father and his lethal military. Plucked from the ashes of a war-torn America is a half-Native/half-black fourteen-year-old named Roger Bretagne.

After losing his family to Heartland’s devastating blitzkrieg, Roger is rounded up and matriculated into this stark, repressed, and dangerous new world. His new parents are powerful predators, the quiet country town he lives in is an oppressive hamlet gripped by fear, and his school – under the control of the beastly schoolmaster Brother Isaac – emphasizes brutal indoctrination. Somehow, sanity must prevail. In cautiously navigating the rocky road of this toxic milieu, Roger finds love, allies, and a burgeoning resistance movement hellbent on destroying Heartland and building a glorious future. Whatever that entails.

Roger is not a first when it comes to first-person narratives in worlds gone mad, but his half-Sioux/half-black lineage is a definite first in Native American fiction. Roger is a character that was very unexpected to me. There were a lot of surprises in the writing of this book, but the character of Roger felt like a revelation. While I took great pains to create a character and not put myself or anyone I loved in a fascist society, I feel like I ended up putting myself there. Roger was more than just a window into this world. We share the same heritage. It feels like I’ve got skin in the game.

Roger’s War is available on Kindle and paperback through Amazon.com.