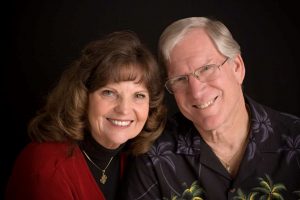 Lorna and Larry Collins grew up together in Alhambra, California. They have been married for fifty-seven years and have one daughter, Kimberly.

They worked together on the Universal Studios Japan theme park in Osaka. Larry was a Project Engineer responsible for the Jurassic Park, JAWS, and WaterWorld attractions. Lorna was the Document Control Supervisor in the Osaka field office.

Their memoir of that experience, 31 Months in Japan: The Building of a Theme Park, was a 2006 EPPIE finalist, and named one of Rebeccas Reads Best Nonfiction books of 2005.

Their mysteries, set in Hawaii, are Murder…They Wrote and Murder in Paradise.

Her solo mystery/fantasy is a ‘beach read’ called Ghost Writer. She also wrote Jewel of the Missions: San Juan Capistrano and a children’s book, Lola, The Parrot Who Saved the Mission. Their joint venture is The Memory Keeper, a historical novel set in San Juan Capistrano in the 1800s, told from the point-of-view of a Juaneño Indian.

Larry’s collection of short stories is entitled, Lakeview Park. His latest project is his sci-fi series, The McGregor Chronicles. He has finished nine books in the series.

Their latest collaboration is Dominic Drive, from an idea of Lorna’s late brother, Ronald Travis Lund. (Available in ebook, paperback, hardcover, and audio.) 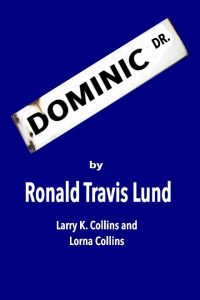 Dominic Drive is the coming-of-age story of Charlie Williams, a young man who has a difficult childhood but who remains optimistic and hopeful, told through the eyes of another young man who becomes as close as a brother to him. Set in the late 1950s and early 1960s, it captures life in a post-WWII community.

All their books are available on Amazon, Barnes & Noble, their website (www.lornalarry.com), and other online book outlets. Follow Lorna’s blog at http://lornacollins-author.blogspot.com.

Do you write in more than one genre? We started writing a nonfiction memoir of our time spent working in Osaka on the Universal Studios Japan theme park, 31 Months in Japan: The Building of a Theme Park. We never expected to write and publish anything else. However, we attended a writing conference and got an idea for our first Mystery, Murder…They Wrote. This led to our second mystery, Murder in Paradise, and we have added several other genres since.

What is the most challenging part of your writing process? Since we write together, blending our voices into one seamless voice was initially a challenge. Also, Larry is a plotter, and Lorna is a “pantser.” (She writes by the seat of her pants.) Over the first few books, Larry learned to trust the characters, and Lorna became more disciplined. We sometimes disagree on plotlines, but we usually throw out both ideas and settle on another—better—one. After having written several books together, the process has become almost second nature.

What are you currently working on? After nearly three years of research, in 2014, we published The Memory Keeper, a historical novel set in San Juan Capistrano, California, between 1820 and 1890. We talked about a sequel and started the research for it. However, we both were pulled into other projects, and this one languished. When Larry finished Book 9 of The McGregor Chronicles, he was ready to get back to it. Meanwhile, Lorna had written quite a few chapters, but she needed Larry’s voice in the story. They are finally finishing the sequel to be called Becoming the Jewel, to be published soon.

Has an association membership helped you with your writing? After we wrote our first book, it was nominated for an EPPIE award from EPIC (The Electronic Publishing Industry Coalition). We attended their conference in 2006 and became members. There we met publishers, other authors, agents, and other industry professionals, from whom we learned a great deal. We did presentations and panels at over a dozen or more of their conferences, including one keynote address, and Lorna moderated the publishers’ panels. We remained members until the group disbanded several years ago.

Through members of EPIC, we joined PSWA (Public Service Writers Association). We have attended several of their conferences and learned a great deal about police procedures as well as how other safety professionals work. We have also made some great friends in the group.

What’s the most challenging thing about writing characters of the opposite sex? This is where writing together gives us a decided advantage. For the most part, Larry writes the male characters, and Lorna writes the female ones. With one exception: Larry writes most of the old ladies in our novels! For some reason, he started writing them in our first mystery, and he has continued ever since.

Do you ever kill a popular character? If so, what happens to your story? Between 1861 and 1863, a plague (black pox or smallpox) killed 90% of the Indian population of San Juan Capistrano. When we were writing The Memory Keeper, we knew at least one of our characters would have to die. Larry was set to lose one, but Lorna argued with him. If 90% of the native population died, then their family would have to lose more of their members.

When we reread the completed chapters about the plague, Lorna sobbed. She does so every time she rereads the book. A few chapters later, we needed to lose another character. He was a particular favorite, so his loss felt very personal to both of us.

In these cases, their loss was already part of the plot. (Larry is a plotter, remember?) The storyline already included their losses, so the storyline continued as planned.

What obstacles do you face when writing about historical figures? Because we write about the authentic history of San Juan Capistrano, California, and because history is so revered and protected here, we have to be 100% accurate. (History is like a second religion in town.) If we say a particular thing happened at a specific time, it did. Historical figures must be portrayed exactly as they were. So far, we have received no criticism about our historical accuracy, so we must have done a few things right. But in order to achieve this level of accuracy, we have to read a great many books and articles and interview many experts. About 95% of what we learn never makes it onto the pages of our books, but it is necessary for us to know it.

Do you have any advice for new writers? The first thing is to keep writing. Too many writers give up early. Second, join a critique group or take a college-level writing class. Third, when you think you are finished, find a few beta readers, who are NOT friends or family members, to read the complete work and give you feedback. This is where professional organizations can be of great help.

Once you get positive feedback, hire a professional editor. No one can properly edit their own work—including us.

Last, if you intend to self-publish, also invest in a professional cover artist. Since books are now purchased mostly online, the cover must stand out when seen as a thumbnail image. A professional can help you with an image that will sell your book.

Anything else you’d like to tell us about yourselves? Lorna is a well-respected professional editor. She had lots of experience in her former career in Document Control and carried it into her writing profession. She provides content and line editing as well as formatting for ebooks and print.

Larry is a professional cover artist with well over 100 published covers to his credit. He has designed nearly all of the covers for their books.