It is with pleasure that I welcome Jordan Bernal as a guest blogger.

Jordan is a long-time friend and mentor. She writes fantasy with elements of mystery and romance.  We are sharing two of her fantasy stories today. 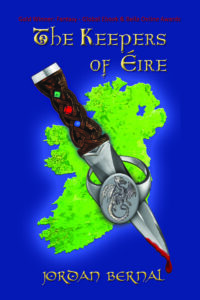 The first, The Keepers of Éire (Celtic Dragonriders Book 1), is a modern-day fantasy. For centuries dragons have protected Ireland, their existence kept secret with the help of earth magic and their human riders. Now that secret is threatened as the bodies of four riders are found at sacred Irish sites. Christian Riley, a man with secrets of his own, is haunted by vivid dreams of each slaying. Devan Fraser, an American searching for her Irish heritage and the meaning of an inherited dragon ring, stumbles into the mystery of the murders. Christian’s only memento from the mother who gave him up for adoption is a dragon pendant that matches Devan’s ring. Together they discover their destinies, the truth of dragons, and the depth of honor and loyalty people will go to protect the ones they love. 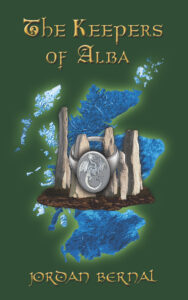 Jordan’s latest work, The Keepers of Alba (Celtic Dragonriders Book 2), will be released on September 1, 2020. Devan Fraser, the only rider with the magical ability to hear and bespeaking all dragons, is thrust into the middle of a deadly conflict, decades in the making. Separated from her beloved, Christian Riley, she finds herself in a desperate race against time. Can she decipher the obscure meanings outlined in an ancient prophecy and escape a crazed madman before feuding clans destroy Scotland? Or is it already too late? Is the magic that sustains all dragonkind destined for extinction?

Jordan has allowed her protagonist, Devan Fraser, to tell us about herself and the exchanges she has with the author. To keep some control over where Devan goes with the interview, we’ve given her a few questions.

What was life like before Jordan started pulling your strings? I hate to say it, but my life was boring, with a capital B. You see, I was a researcher at a local university until budget cuts took away my position. So, no job and not many prospects. I started looking for a new job when my parents were killed in a vehicle accident. Oh, and I had just broken up with my fiancé, Rick. Rick will tell you just how much of a bore I am as he spouts all my flaws.

What’s the one trait you like most about yourself? Something that I’ve recently learned about myself: I’m fiercely loyal. Once I believe in someone, I am that person’s strongest advocate. It takes a massive falling-out for me to lose faith in someone I trust.

What do you like least about yourself?  That I’m a bit too needy. I tie my self-worth into how much I’m needed. I don’t do well with confrontations. I’m more likely to step back from a situation and thus not deal with it. I’m also a bit too trusting. I’m still a work-in-progress and have my doubts at times, but that’s life, right?

What is the strangest thing your author has had you do or had happen to you?  You mean, besides leaving the U.S.A on barely a whim, travel to Ireland by myself, and then finding out dragons do exist? Well, I did learn I have a special magical talent: I can hear and speak telepathically with all dragons. That ability led to saving a bullied wingless dragonet, Grayson. It also led me to become a dragonrider with the Tuatha Dragon Clan.

Do you argue with your author? If so, what do you argue about?  Not really. My author, Jordan, really knows me, probably better than I know myself. And while Jordan’s constantly putting me in dangerous situations, I’m learning how strong, intelligent, and courageous I can be. Though, I do wish I didn’t have to be bruised and battered so much in the learning. Oh, and I was a bit nervous about how quickly I fell in love with sexy Irishman, Christian, but I’ll not argue too much as the loving is fantastic.

What is your greatest fear?  To be alone. Truly alone. When my parents died, I had no one. I was an only child, and my grandparents and uncle on my mother’s side had all died before I was born. I don’t know anything about my father’s side of the family, as he never spoke of them.

What makes you happy?  Being needed. Belonging. Especially belonging to the Tuatha Dragon Clan, being a partner to my dragon: Dochas, and being Christian Riley’s friend and lover. And by belonging, my confidence in my abilities is growing.

If you could rewrite a part of your story, what would it be? Why?  Of course, I’d want to have my parents still alive. I miss them terribly. There’s so much I want to talk to them about, or enjoy a walk on the beach, or share a cozy evening sitting by the fire. But without my losing them, I wouldn’t have gone on this wild and crazy journey to Ireland. I wouldn’t have met the love of my life, Christian. And I wouldn’t have become Dochas’ rider.

Of the other characters in your book, which one bugs you the most? Why?  Kiely, Padrick’s mother. Kiely is a . . . well, let’s just say she’s a master manipulator as well as a bit of a prejudiced gobshite (I’m learning a few choice Irish slang words).

Of the other characters in your book, which one would you love to trade places with? Why?  I can’t think of anyone. I’m finally who I was destined to become. I get to fly adragonback, so my love of flying is set free. I’m madly, wildly in love with my sexy Irishman. Now, if Christian and I can stay a few steps ahead of the killer—at least until we can stop him—my life would be perfect.

Tell us a little something about your author. Where can readers find her website/blog?  When Jordan Bernal says she was born on the wrong planet, she’s referring to the third planet in the Sagittarian Sector, known as Pern. So clear and descriptive was Anne McCaffrey in her Dragonriders of Pern series, Jordan was transported into the body, mind, and soul of Anne’s characters. Jordan came away knowing she was destined to be a dragonrider; to hop from one foot to the other on the hot sands of the hatching ground awaiting a dragon of her own. She fantasized about the air currents lifting the dragon she rode, soaring over cliffs and chasms, embracing the joy and freedom as together, they broke gravity’s harsh leash. And most of all, Jordan knew she was meant to create stories with a new set of dragons and dragonriders.

Jordan’s enduring love of dragons and her pursuit of her Celtic heritage inspired her to write and publish novels in her Celtic Dragonriders series through her independent press, Dragon Wing Publishing. Jordan’s website is http://www.jordanbernal.com.

What’s next for you?  Lots more adventures (i.e., dangerous situations and personal growth) in The Keepers of Alba (Celtic Dragonriders Book 2) due out September 1, 2020. As you might guess from the title, most of this story takes place in Scotland. Maybe I’ll get to learn about my father’s family after all. I do wonder if I’m related to Jaime Fraser of Diana Gabaldon’s Outlander series. Wouldn’t that be awesome! He’s so handsome, for a highlander from the 18th century. But my Christian’s all I need.

What’s on the horizon for you and your author? I’ve had a whirlwind (exhausting, yet exhilarating) seven and a half months (eleven years for Jordan) in The Keepers of Éire & The Keepers of Alba. In between these two novels, I made a guest appearance in Reluctant Paladin—a middle-grade anti-bully story that Jordan published in 2017. I know Jordan won’t keep me at loose ends for too long. After all, Dochas, Christian, and I, along with my other dragon and rider friends, must save the magic from extinction throughout the Celtic lands. That said, it takes Jordan quite a while to write my story. And she’s committed to serving as president for her writing club for at least one term.

Author-Anything else you’d like to tell us about yourself and/or your books?  Devan covered just about everything, but I’ll expand on one thing: the length of time between novels. As a reader, this can be quite 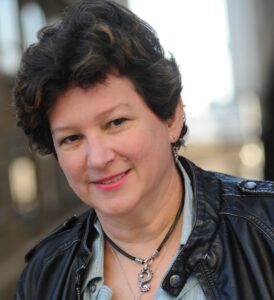 frustrating. Believe me; it is for a writer as well. Yet I just can’t write much faster. These novels, except for Reluctant Paladin, are over 120,000 words long. And I have health issues that require me to utilize voice recognition technology (DragonDictate. Yes, I speak Dragon) to tell Devan’s and Christian’s stories.

On top of that, I’m meticulous in my world-building and character development. I find I’m often researching something or some place to use in the novel. All that .takes time. I promise I’ll be as quick as I can in getting Book 3 of my Celtic Dragonriders series written and into readers’ hands.

How can readers reach you?