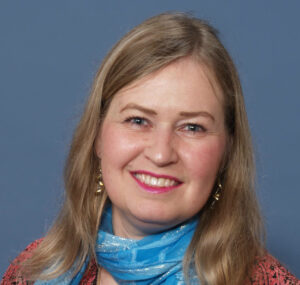 I write multicultural fiction inspired by the places I have visited around the world.

As a student in Leipzig, East Germany, I sampled Hungarian wine at the Auerbachs Keller, the underground restaurant where Johann Wolfgang von Goethe set scenes from his tragic play, Faust. While living in Switzerland, I biked around my family’s Bürgerort (ancestral village), explored the Jura Mountains near Neuchậtel, and never passed up an opportunity to sample Swiss fondue. These days, I regularly travel to Iran, where I have pondered the ancient past amid the ruins of Persepolis, baked translucent bread with Kurdish women in the Zagros Mountains, dipped my toes into the azure waters of the Caspian Sea, and observed the dichotomy of a publicly religious yet privately modern culture. My work has appeared in World Literature Today, Nautilus Magazine, and several anthologies and has been translated into five languages.

What brought you to writing? When I was in college, I studied languages and world literature and wrote stories on the side. When graduation approached, and it became time to put some thought into a career, I decided to combine my two loves, language and writing, and become a translator. I had a vision of translating works by my favorite German novelists. But the reality is that we all have to make a living and, as any writer will tell you, literature doesn’t pay the bills. Not even literary translation. So I became a patent translator and continued to write stories on the side.

Do you write in more than one genre? I write short stories and novels, but the short form is my favorite. I’ve written murder mysteries, capers, thrillers, and political satire. More recently, I’ve begun to write literary fiction as well.

What kind of research do you do? My stories usually begin with a place. I never leave the house without a small Moleskin notebook in my pocket. Perhaps some detail or snippet of conversation will come my way, and I whip out that notebook to jot it down. I’ve written entire travelogues in my little notebook while on extended trips to faraway locations.

Research always gives me a good reason to travel. When writing my short story, “Trading Places,” which was published in the online magazine, Nautilus, I went back to Leipzig for the first time in thirty years to check out locations for my setting. Set in the city’s socialist past, the story is about a graffiti artist who paints satirical political slogans all over town in an attempt to inspire a workers’ uprising, similar to the Polish Solidarity movement. I discovered that the city had changed a lot since my student days, so I enlisted the help of a local friend to scout out places that still held the old socialist atmosphere. And I filled my Moleskin with personal stories I learned from the people I met along the way. 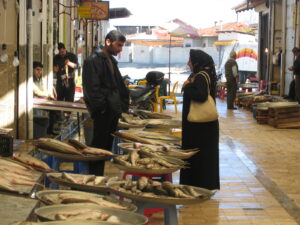 Where do you place your settings—real or fictional locations? I use both real and fictional places. In Trading Places, I set the story in real-life Leipzig, but some streets and businesses no longer exist or have been renamed since German reunification. I am currently working on a novel that takes place partly in New England and partly in Iran. The early chapters are set in a fictional town in Vermont because I wanted the flexibility to alter the setting to fit the needs of the story. The Iranian portion of the story unfolds in two real places (Tehran and Shiraz) and one fictional village on the Caspian Sea. I chose the real places for authenticity, but again I wanted more flexibility for the Caspian Sea setting, so I made up a town. However, it’s based on a real village situated on the shore of the inland sea. I simply added a few features that don’t exist in the real place and changed the name.

The photo is of an Iranian fish market near the Caspian Sea.

How do you come up with character names? I collect names all the time. I keep lists of them on my computer, and when I come across an interesting one, either through my reading or in real life, I jot it down and add it to my list. Websites of baby names are a great resource, especially for foreign names. Often they list the meaning of the name as well. This can be fun when picking Iranian names, which sometimes refer to mundane objects or abstract concepts: Mozhgan (eyelashes) or Arezou (wish). I named one hot-tempered character Atesh (fire) and gave the name Noor (light) to another, who helped the protagonist find what she was seeking.

Has an association membership helped you in your writing? I’ve been a member of Sisters in Crime for many years, and it is likely the reason I am published at all. It is a wonderful group for both support and learning craft. Also, I always run my work past several beta readers, both in a critique group that meets twice a month (on Zoom at the moment) and others with whom I exchange completed manuscripts by email. Many of these readers are people I met through Sisters in Crime. 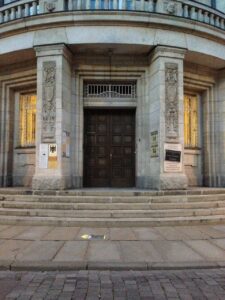 The former Stasi headquarters in Leipzig, Germany, now a museum.

My Cold War short story can be read here: https://nautil.us/issue/6/secret-codes/trading-places