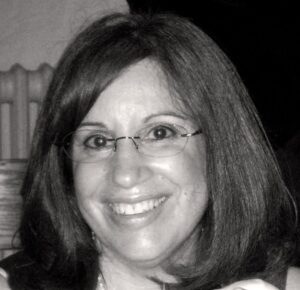 Lois Winston writes mystery, romance, romantic suspense, chick lit, women’s fiction, children’s chapter books, and nonfiction under her own name and her Emma Carlyle pen name. Kirkus Reviews dubbed her critically acclaimed Anastasia Pollack Crafting Mystery series, “North Jersey’s more mature answer to Stephanie Plum.” In addition, Lois is a former literary agent and an award-winning craft and needlework designer who often draws much of her source material for both her characters and plots from her experiences in the crafts industry.

Up until fairly recently, I juggled three careers, one of which gave me the idea for my long-running Anastasia Pollack Crafting Mystery Series. Until retiring last year, I worked for decades as a designer and editor in the consumer crafts industry, primarily designing needlework for kit manufacturers and magazine and craft book publishers. However, I have been known to wield a nasty glue gun from time to time and have the scars to prove it! But it’s been well worth the pain, given the accompanying inspiration it’s provided. (see below)

I began my writing career in the romance genre. My first published book, Talk Gertie To Me, which was more humorous women’s fiction than romance, 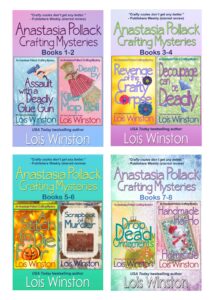 was published in 2006. Love, Lies and a Double Shot of Deception, a romantic suspense, came out in 2007. By then, I had decided to take my writing in a different direction with a mystery series. Assault With a Deadly Glue Gun was the first book in the Anastasia Pollack Crafting Mysteries. I sold the series at the end of 2009, and the first book was released in January 2011.

But I said I juggled three careers, didn’t I? After selling my first book, the agency which represented me invited me to join them as an associate, which made me, for a time, an author, an agent, and a designer. With the changes that have occurred in publishing the last few years, coupled with the death of two of our agents and the retirement of one, the agency owner decided it was time to close shop after nearly fifty years in business. So now I’m back to one career. Truthfully, it’s the one I love most because it enables me to live 24/7 within my imagination.

The idea for the Anastasia Pollack Crafting Mysteries came about thanks to a conversation my agent had with an editor. The editor was looking for a crafting mystery series. My agent figured, with my background, I was the perfect person for the project. I hadn’t read any crafting mysteries at that point, and when I began researching them, I discovered that most featured amateur sleuths were shop owners. I wanted to come up with something different and tapped into my own industry experiences as a crafts editor, making Anastasia the crafts editor at a women’s magazine.

The idea for the first book came about from a combination of events. My husband had recently lost his job, and although he’s nothing like Anastasia’s husband (thank goodness!), it sent me into a tailspin of worry regarding money. Although I juggled three careers at the time, none of them provided me with a steady income. On top of that, I was having mother-in-law problems. Finally, when I first started contemplating the series, The Sopranos was still on HBO. I’m a Jersey girl. How could I not set a mystery in my home state and involve the Mafia in some way?

All of these elements, along with just having sustained a painful burn from my hot glue gun, came together to form the basis for both the first book and the overall series: When Anastasia Pollack’s gambling-addicted husband permanently cashes in his chips in Las Vegas, her life craps out. She’s left with two teenage sons, a mountain of debt, and her nasty, cane-wielding communist mother-in-law—not to mention a loan shark demanding fifty thousand dollars.

Given the premise for the series, I knew it had to be humorous. I’ve always been drawn to quirky characters. They make me laugh. I think we all need more laughter in our lives, especially with everything going on right now! Releasing those endorphins is the only thing sustaining many of us these days.

In crafting quirky characters, I usually take traits from various people I know, exaggerate them, and blend them together to create unique characters. Let’s face it, most people aren’t as quirky or funny in real life as they are on the printed page. The exception is Lucille, Anastasia’s mother-in-law. With a few minor differences, Lucille’s personality (along with her communist leanings) mirrors that of my now deceased mother-in-law. Hence, the mother-in-law problems I mentioned above—and the reason why some of my husband’s relatives no longer speak to me!

There are now nine full-length novels and three novellas in the Anastasia Pollack Crafting Mystery Series, which have received starred reviews from Publishers Weekly and Booklist and an Amazon #1 Bestseller. The latest book is A Sew Deadly Cruise, released October 1st.

Come for the laughs, stay for the mystery! 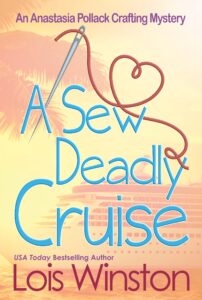 Life is looking up for magazine crafts editor Anastasia Pollack. Newly engaged, she and photojournalist fiancé Zack Barnes are on a winter cruise with her family, compliments of a Christmas gift from her half-brother-in-law. Son Alex’s girlfriend and her father have also joined them. Shortly after boarding the ship, Anastasia is approached by a man with an unusual interest in her engagement ring. When she tells Zack of her encounter, he suggests the man might be a jewel thief scouting for his next mark. But before Anastasia can point the man out to Zack, the would-be thief approaches him, revealing his true motivation. Long-buried secrets now threaten the well-being of everyone Anastasia holds dear. And that’s before the first dead body turns up.