Mark Langley – Takes His Readers on a Ride Through the West

Mark Langley – Talks About his Approach to Writing

My latest book, Death Waits in the Dark, is the second in a series concerning Arthur Nakai, a former Marine, ex-Shadow Wolf for the CBP. He has left that 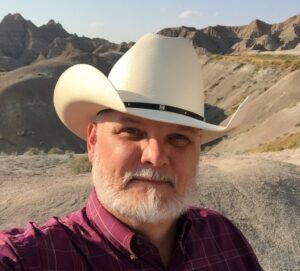 life and runs his own outfitting business in Northwest New Mexico. His wife, Sharon, a local KZRV news reporter and sometimes anchor, is still struggling with the loss of their first child, and the two of them are trying to move forward in their marriage. This is stressed in my first book, Path of the Dead, and begins to reshape them in Death Waits in the Dark.

I have always wanted to tell stories. After a terrifying car crash in my thirties, I sat in the hospital wondering what if I hadn’t made it? What if I was alive only with the help of machinery? What had I done with my life? From that moment on, I decided to live and go where I always wanted to go: the American Southwest. My parents took me there on a vacation when I was twelve, and the land had been a part of my soul ever since. I had to go back. I had to go back to what I felt was my home. Upon doing so, the urge to write of characters that inhabited that land grew evermore present inside me. I took a two-week trip and dictated everything I saw, felt, smelled, and heard into an old Panasonic tape recorder. That trip became Path of the Dead. 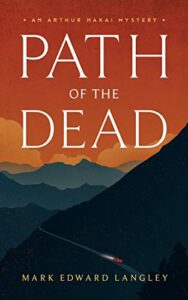 I’ve been told I do things a little backward. I normally think of a title and then create a story around it. Then I sit down and create characters along with backstories and begin to work out the plotline. I may go through several drafts, but I sit down at my laptop and let the Characters take over when I have all I need.

The third book in my Arthur Nakai series, When Silence Screams, is about a missing nineteen-year-old from Santa Fe. When Arthur is visited by the girl’s mother and her brother, she has been missing for six months. The family believes she has been sold into sex-trafficking. While Arthur is searching for her, he learns of a fifteen-year-old girl that has vanished, leaving only her bicycle behind. Then a young woman in her early twenties is fished out of a lake on the Navajo reservation with a ghastly revelation. Are the three connected? Arthur will have to find out.

After reading about the Missing and Murdered Indigenous Women and Girls on the reservations in both the US and Canada, I created this story. Like Shirley, Becenti tells Arthur, “When a white girl goes missing from a golf course, the world hears about it. Let it be an Indian, and no one cares.”  When I read that in 2016 alone, 5,712 girls and women went missing, I had to tell a story that would make people aware and think. I don’t tell the reader how to think but encourage them to form their own opinions.

Currently, I am reading Craig Johnson’s Longmire series as well as Anne Hillerman’s continuations of her father’s works. I confess I don’t get a lot of time to read, but I have read my author idols: Robert B. Parker, Mickey Spillane, and Ernest Hemingway, along with Ian Fleming and John D. MacDonald (whom I share a birthday with).

Path of the Dead took me about 20 years to write. I have a favorite saying John Lennon said years ago: “Life is What Happens To You While You’re Busy Making Other Plans.” I began Path of the Dead under the title Navajo Wind, then met the woman who became my wife, worked hard, took her adolescent daughter as my own, and life took over. Other things became more important. For the next 20 years, it was an on-again-off-again romance with writing. Then, at the end of 2016, after retiring, I decided to take my one chance at making my dream come true. And thank God, it did. A few months later, I had an agent and a two-book deal with Blackstone Publishing.

Character names seem to fall into place as I develop the persona of each character. If the name flows, I use it. If it doesn’t, I keep searching. The names have to feel real, not contrived, for me to create a character around them.

As most writers can attest to, you can think all you want about how they would react. Still, whether they are having a conversation, involved in some action, they tend to have a mind and will of their own and do things you hadn’t thought of. Their own “humanity” comes to the surface.

I don’t believe that a man can’t write from a woman’s perspective or vice versa. A lot of Sharon’s actions and words are my wife’s. I think that adds to the reality of their marriage. And my readers have told me they love the characters because they are believable. In Death Waits, I deal with PTSD and Arthur’s military past. Having never had that experience, I turned to my friends that had joined after high school and had been in Afghanistan. I sat and listened and learned a great deal. Then I did a lot of research, and that made me able for Arthur to convey that bond of brotherhood and talk of his past truthfully.

I love having subplots. In Path of the Dead and Death Waits in the Dark, I use them. I find that even if they are little things that actually have happened in 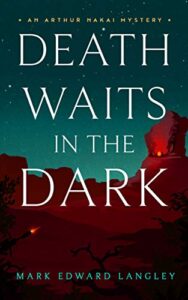 the area Arthur calls home, not only will the readers that live in that area remember them, but other readers will see the subplot as an interesting little detour.

Arthur’s looks are based on a Native actor. Sharon is based on a TV reporter I got to know. Jake Bilagody resembles my grandfather in stature. In When Silence Screams, a few characters are based on friends I had in high school and my first job.

I always outline. I find it is much better to have a road map than to wing it. I outline the story as a whole, then each chapter. That always seems to change, however, when the characters take over the narrative.

I compile folders, if not binders, of research concerning what the story will be involving. That is both the hardest part and the most enticing part of being a writer—learning about things of which you had no idea.

I tell my readers that 98% of the locations are real. I have been there, driven the hard-packed roads, and tried to bring those places to life. Then, the other 2% are fictional because there is so much more leeway to accomplish what a writer needs to.

When Silence Screams will be out next August, but right now, I am researching book four, “GLASS.” It concerns the terrible grip crystal meth has on the reservations. In this age of Covid, I cannot visit the area as I have in the past. I rely on doctors near me and the internet to explore this scourge. Glass will be set for release in 2022.

The best advice I have for other writers is to never give up. Perseverance is the key. Never give up on your dream and goal, and NEVER give up on yourself. If you do, then you have lost. No matter how many naysayers there are, they do not understand your dream or goal. That cannot even imagine it. Only you do. Live your truth.