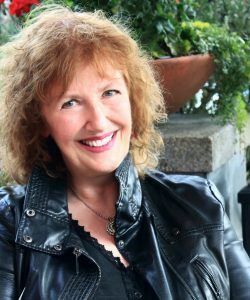 Valerie J. Brooks is a multi-award-winning author of femmes-noir thrillers where the women are badass and take center stage. The first in the Angeline Porter Trilogy Revenge in 3 Parts, was a finalist for the Nancy Pearl Book Award. NYTimes bestselling author Kevin O’Brien called her second novel Tainted Times 2 “… a real nail-biter from the first page to the last.”

Valerie is a member of Sisters in Crime and the Pacific Northwest Writers Association. She teaches workshops and classes on writing noir and creating plot twists. 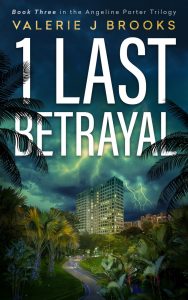 alarming text and races in desperation to Florida only to find a ransacked apartment, a poisoned dog, and a missing half-sister.

Let me tell you a story – When I was sixteen, I worked as a New England Tel & Tel switchboard operator. Back then, this was a prime job for someone my age, but it could also be boring, sitting there, waiting for lights that indicated a call.

One day, I connected a call from a Laconia phone booth to a Massachusetts number. I asked the caller to deposit the correct amount of change for the three-minute call, connected the two numbers, and closed the switch. I went on to other calls.

After three minutes were up, I went back to the call. As I did with all calls made from a phone booth, I pulled back the switch to listen in on the call so I could break in during a lull in the conversation without the caller knowing.

What I heard felt so dangerous that I couldn’t talk. The man from the Boston number was setting up a hit with the man in the phone booth. I wish I could remember the conversation, but I did understand that the Boston man gave instructions to the man in the phone booth to kill someone who lived in Belknap Acres, a ritzy, gated residential area that was rumored to have an armed guard at the gate.

I wrote down the two phone numbers and the name of the Boston man associated with the number. I wrote down the few specifics I was able to hear. The conversation was short.

After they hung up and I disconnected the line, I questioned what I heard. Was I imagining it? Was it a joke? But I’d heard too many rumors about Belknap Acres and what went on there, who lived there, why there was an armed guard. I had no idea who was supposed to be killed, but I did have an address.

I had to work a little longer before I could signal the switchboard foreman that I needed to speak with her. We went into her office, and I told her about what I had heard.

“I’m sorry, but I can’t do anything about this,” she said. “You know we’re not allowed to listen in on calls, and we would have to explain how we heard this information.”

I knew the rules but thought this situation would be different. Someone was going to get killed.

All afternoon, I worried about the call. The hit was planned for that evening. I decided to tell my parents when I got home. They were strict with us kids about living by the rules, but I figured they wouldn’t care that I listened in, not for something like this, and Dad often talked about how corrupt Massachusetts was.

Right away, my mom called the FBI. We figured that someone would take the info over the phone, and that would be that.

Instead, twenty minutes later, two FBI special agents knocked on our door. My parents invited them in. One sat down across from me while the other stood by the door. They wore street clothes, no suits. The agent who asked me questions seemed like anyone I’d run into in town—non-descript shirt and pants, a little overweight, a kind smile. I answered all his questions and gave him the piece of paper that I had saved with all the info. The agent spoke softly and made me feel comfortable, not what I’d pictured from an FBI agent. He thanked me for calling them. I asked him if he’d let us know what happens. He just smiled and said, “No. You won’t find out anything about this unless, for some reason, something happens that the news finds out about.”

He thanked my parents, and they left. We never heard anything else. My dad said they must have been working on a local case, and it could have had to do with the information I gave them.

That was the beginning of my interest in mobs and the FBI.

Now to back up a bit – I’d always loved dark stories, gothic tales of secrets, and writers like Wilkie Collins and Daphne du Maurier. Later I fell in love with Jean Ryss novels. Growing up in New Hampshire added to my interest. As children who were expected to be seen and not heard during adult gatherings, we heard plenty. Families worked hard to be perceived as perfect, but we knew better. Perception is a tricky bit of flimflammery because truth seeps out. And who better to know this than children who seemed to be invisible. Early on, I was aware of what I would later call hypocrisy, but because it didn’t pertain to me at the time, I didn’t explore it until much later when I moved to Oregon and began writing.

My interest in the underbelly of life took full bloom while taking college courses in film noir. I loved the voice, the tropes, and the truthful examination of our culture, lifestyles, and capitalistic drive/greed. For me, noir dispelled the fantasy idea of “happy ever after” and “justice wins.” Perry Mason was a fantasy of good winning over evil. Of course, we need fantasy to escape the hard realities at times, but I just couldn’t write like that or write in black and white. As the brilliant Dennis Lehane says, “I live in the gray.”

Living in the gray when you’re a writer sometimes makes the work harder. How do I give a satisfying ending? What do my characters do that make them fascinating? Usually, my characters are like me, except they push boundaries as I never would. For example, Angeline has killed two mobsters in self-defense. Could I ever do that? I don’t know, but I love her for it.

Being a pantser, I start my thrillers with a setting. I might have an idea about the character, but as in my first of the Angeline Porter Trilogy, I wanted to set my story in Paris. Having been to Paris in 2015 and having taken many notes, Angeline came to life, stepping off the Metro. With the second in the trilogy, the setting had to be New Hampshire, where I grew up. There’s not as much action, but there’s a lot of atmosphere and secrets that Angeline discovers, setting her on a direct path to the third thriller I just finished, 1 Last Betrayal. The secrets lead her to trying to save a sister she never knew she had. Off to Hollywood, Florida, where mobsters ruled back in the day. Its history made me yearn to know more about the setting, which was perfect for the “final showdown” with the mob. 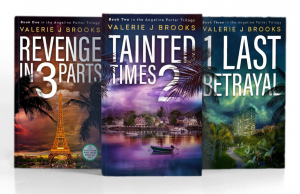 Now I’m immersed in the promoting and launching of the third thriller. I miss my characters. Miss them terribly. I’m tempted to write another Angeline story. “We shall see,” as my Brit mom used to say. One thing I know for sure—I need to start writing again. Whatever the story.