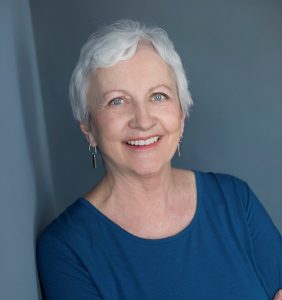 Cindy Sample is a former corporate CEO who decided plotting murder was more entertaining than plodding through paperwork. She retired to follow her lifelong dream of becoming a mystery author. Her eight-book Laurel McKay Humorous Mystery series is primarily set in the California Gold Country unless Cindy feels like traveling. Then the characters tag along with her on trips to Hawaii, the Caribbean, and Las Vegas. 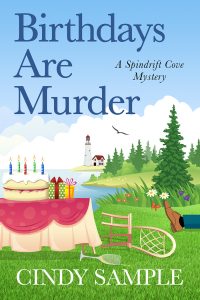 entertainers are scarcer than good hair days. She reluctantly accepts a party-princess gig. Little does Sierra know she’ll soon be upstaged by a corpse and become the leading-lady suspect.

What brought you to writing? I discovered Nancy Drew in the first grade, and by the time I turned eight, I’d read all the books in the series. One night, I decided to use my spelling words and dashed off a sixteen-page sequel. It would have been longer, but my mother made me go to bed at 8:30. I received an A+ and was hooked. I knew I wanted to be a mystery author. Although it took a half-century for me to realize that dream.

What are you currently working on? I just released BIRTHDAYS ARE MURDER, the first book in my new Spindrift Cove Mystery series set on the Olympic Peninsula. I’m currently plotting the sequel while also writing DYING FOR A DECORATION, a holiday novella that will be the ninth book in my Laurel McKay Humorous Mystery series. Laurel manages to get in trouble without much prompting from me.

We hear of strong-willed characters. Do yours behave, or do they run the show? In the first two Laurel McKay Mysteries, my characters behaved and aligned with my original plot concept. When I began writing DYING FOR A DAIQUIRI, the third book in the series, the victim absolutely refused to let me knock her off. So she was upgraded to a suspect. At the time, I was vacationing in Hawaii, the book’s setting. The next day, while dining at my favorite oceanfront restaurant, I visualized the new victim, a hula dancer who worked at Laurel’s brother’s Daiquiri bar. More suspects than I could ever have imagined walked into that story. At first, I was frustrated because I couldn’t figure out who the killer was. But I also discovered how much fun it is to play detective while writing a book. The murderer was finally revealed to me around page 170. Since then, I have let my characters evolve on their own.

Do you have subplots? I have a very fertile imagination and so do my characters. I never experience writer’s block, but I dream up so many plots that sometimes it’s difficult to choose. I try to weave in subplots about my protagonist’s family that are relatable to readers. Domestic issues can range from her eight-year-old son and teenage daughter to her bossy mother and feisty octogenarian grandmother. I also added a 150-pound Bernese Mountain dog in book seven who provides plenty of humor all by himself.

What kind of research do you do? I love my research, whether riding an ATV, performing at a ballroom dance competition, sampling daiquiris in Hawaii, or donuts in the Gold Country. My Laurel McKay series is known for its comic chase scenes. I’ve ridden backhoes (slowest chase scene ever), snowmobiles, wave runners, gondolas, stagecoaches, and tandem bicycles to make sure the details were just right. And I watch a ton of YouTube videos, too as well. Since Laurel and I are equally klutzy, the humor comes naturally to both of us.

Where do you place your settings—real or fictional locations? I live in the California Gold Country, a beautiful area with historic gold mines, wineries, and apple orchards, close to the Sierra Nevada mountains. I wanted to profile the town and some of my favorite places. The series has become so popular locally that business owners frequently request that I “stuff a stiff” in their venue. The Spindrift Cove series is set in a fictional town which gives me more latitude in certain respects, such as the size of the local police force. But I also refer to real places on the Olympic Peninsula that people are familiar with. It’s an incredibly beautiful area, and I love showcasing it.

It’s time!
My riding budding and I, 153 years combined, are ready for a road trip. Our route will traverse seven states and cover 4,000 miles give or take a few. I’ll be leaving from Oakland, California on Saturday, 6/6/2020. We’ll blow out of Phoenix on the 8th or 9th.
The photo shows our route, exclusive of a few side trips. If we hit 4-Corners then it will be nine states.

If anyone is riding some or all the way with us give shout out.