A Proud fourth-generation San Franciscan, Mark is the second-born in an Irish Catholic family of seven, making him a self-proclaimed expert in the pseudoscience of birth order characteristics. He served in the Marine Corps infantry for ten years and as a Police Officer for over a quarter-century. TYPHOON COAST tells the story of what haunts him.

In the Marines, he rose to the rank of Staff Sergeant. Mark received Special Operations training while attached to 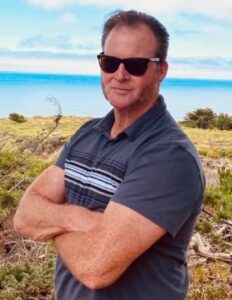 the 3d Marine Division in Okinawa and was operating in the Philippines in 1991 during the historic eruption of Mount Pinatubo. His law enforcement career was equally eclectic. He rose to the sergeant’s rank and served in a myriad of assignments to include SWAT and undercover narcotics.

Mark still calls the San Francisco Bay Area home. He and his wife have been married for almost thirty years and have raised three beautiful children. He has written for the San Jose Mercury, Contra Costa Times, San Leandro Times, and read his works at the famous Cody’s Books in Berkeley.

Mark, we have a few questions about TYPHOON COAST and your writing history. To begin with, what genre or genres do you write in? I work mainly in adventure fiction, magical realism, and historical fiction.

Please tell us a bit about your book. 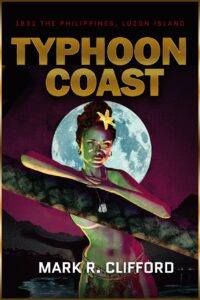 mother is swept away from California’s Typhoon Coast into the unforgiving wild blue Pacific, never to be seen again. Lost and bewildered, Trent falls under the spell of class clown Eddie Thompson, who has a wanderlust for treasure hunts—in particular, the infamous World War II Golden Lily Treasure, buried on the other side of the ocean, deep in the wild green Philippine jungle.

Together, Trent and Eddie follow childhood illusions of grandeur through San Francisco, then become men in the vast Philippine mountains. Mount Pinatubo explodes with apocalyptic fury, but does it take the Golden Lily Treasure with it? Eddie and Trent are not alone in the hunt. The trillions in treasure could afford the US government incredible power in international affairs and bankroll the nation’s black operations. It’s all fair game.

Typhoon Coast is a rollicking ride through 1980s San Francisco, through the vibrant eyes of a boy who loses his mother, and then his innocence. In the jungles of the Philippines, in the 1990s, that boy becomes a man, falls in love, and begins a lifelong quest for a mythical treasure trove hidden in the canopy. Magical realism and romanticism merge with the hard, cold reality of a Marine’s life to reveal a glimpse into how the imagination conspires to keep us dreaming.

When did you realize you wanted to write novels? After twenty-six years, I retired from police work as a Sergeant on June 1st, 2020. Sadly, I watched a massive mob loot and burn the town I served from one end to another. I had friends die on those streets. Friends become disabled; their dreams cut short. Police officers live many lifetimes. It is common to live a lifetime in one shift—all a single life’s emotions wrapped up in a unique tour.

I lost a friend and fellow writer on those streets. He was savagely gunned down. As I folded the flag over his coffin, I promised I’d write a novel. I started soon after.

How long did it take you to realize your dream of publication? Sharing my work with the world was always part of the plan. As the writing process ended, the marketing began. I quickly realized that the publishing industry was changing, and I had to make my luck.

Are you traditionally published, indie published, or a hybrid author? Next step! I am not the smartest guy. But I am stupidly ambitious. I found a guy (now friend) who wanted to give indie publishing a shot. I put the magic on paper, and Greg put his spell on the computer. It was a joint operation, and we were pretty proud of Typhoon Coast the day she was born.

Where do you write? I write from where I am in life. I went from being an altar boy and an Eagle Scout to being a Marine and a cop. I work at my computer in the family room every morning at 6:30. Writing is not a discipline for me; writing is something I serve.

I reach for my hot cup of black coffee in a military veteran mug that my kids gave me for Christmas years ago. The computed screen glows in a dark room. My dog sleeps on the couch behind me. I like quiet; however, I don’t need it. Technically, I was not a true feral child raised by wolves, but I’m Irish-Catholic, and I was the second oldest in a family of seven children—I got peace like I got stigmata.
The world is still quiet at six-thirty—a treat.

I remember my dreams from the night before. I still dream about the jungle and the streets. The concerns of the day will begin in a couple of hours. At six-thirty, the story I serve weaves itself into the rules of my craft. I am its servant.

How much of your plots and characters are drawn from real life? Henry David Thoreau wrote, “How vain it is to sit down to write when you have not stood up to live.” I will never claim that Typhoon Coast is an autobiography. On the other hand, every single detail has a pure life nexus. A writer must write from a place they know.

Sadly, at twenty-six, I was wealthy beyond imagination.

The Philippines is a nation of 7,641 islands and just as many spectacles. June 1991, I was a Marine stationed on Luzon, the chain’s largest island, where fate had ushered me to a front-row seat to an epic adventure. While enduring the fatigue of jungle patrol, I’d befriended a Filipino selling machetes. He’d disclosed to me the suspected whereabouts of a treasure trove rumored to be near the top of the now-infamous Mount Pinatubo.

There is much history about this legendary Golden Lily Treasure, as well as intrigue behind its origin. My new cohort and I soon took a jarring jeepney ride, to board a slow-sinking banca boat that ferried us back to the boonies, where we footslogged toward Pinatubo’s Vesuvius splendor, to unearth our riches in Luzon’s lawless wilderness.

Treasure hunting is rousing. I don’t need to bother you with the intricate details of how the machete man read a series of etchings in rocks, or how we avoided a bottle as if it was a landmine because the Japanese filled Saki bottles with deadly gas to protect the cemented entrances from looters. But we’d found the sealed cave! I could smell the perfume of my soul within…that undeniable fragrance of one’s hopes and dreams. The bigger problem was staying alive to claim it. However, in the end, it didn’t matter. A few days later, I was back on filthy jungle patrol. I tasted the unmistakable lure of treasure that had seeped into my nose and caked to the back of my tongue, as I watched Pinatubo’s cataclysmic eruption blow 500 feet of its summit twenty-two miles into the wild blue yonder.

Typhoon Coast was inspired by the second-largest volcanic eruption of the twentieth century, which blew my life of opulence to oblivion. I have since raised a family and was a cop for more than twenty-five years. I plan on writing two more books based upon the adventures of Typhoon Coast’s main character, Trent McShane. We will follow his life of dramatic happenstance, as he is plucked off his beat and back into the Marines, seizing opportunities to right his life’s tragic wrongs on the trail of a high-stakes mission.

Describe your process for naming your characters? One of the biggest problems with man is that we name everything we see! A “name” is a label that simplifies very complicated things. For example, “Man” is a word that reduces a person’s biology, psychology, genetics, and personal history to three letters. I have lost lots of friends whom I immortalize throughout Typhoon Coast. Their loved ones will recognize them.

Real settings or fictional towns? Why? Create a world that your reader will understand and do it early. I learned something important about storytelling as a young cop. I’d lose my audience at body number two in a multiple homicide story. It wasn’t that I couldn’t tell a dramatic tale; it was that the subject matter was just too remote for a reasonable person to grasp. Now try telling a story about being buried alive in quaking cataclysmic volcanic eruption while a typhoon raged outside. An actual apocalypse that blackened out the sun. They just can’t connect. As a result, I create composite settings and situations to better reach my reader. They are not looking for me. I’m looking for them.

What’s the best book you’ve ever read? I rarely read for pleasure today. I write. I do read voraciously to see how others have written. I have bookshelves uniformly fitted with tattered books that profoundly influenced my inner writer. Drum roll…. The best book I ever read (and recommend to fellow artists) …. Ready for the big reveal?

Answer: The Moon and Sixpence is a novel by W. Somerset Maugham, told in episodic form by a first-person narrator, in a series of glimpses into the mind and soul of the central character Charles Strickland, a middle-aged English stockbroker who abandons his wife and children to pursue his desire to become an artist.

BUT! Don’t run out and buy it. It’s available through my website and Amazon.

What’s in the future for you and your writing? To continue to write, of course. A story can be told from many perspectives.

Anything else you’d like to tell us about yourself and/or your books? Stay tuned for Barbary Coast: Fly from Evil to be released in 2021!