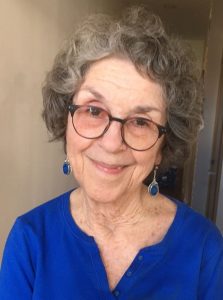 Elizabeth Varadan is a former teacher who writes poetry, children’s fiction, and adult mysteries. She and her husband live in Sacramento, California. They love to travel and divide their time abroad between Braga, Portugal, and Galicia, Spain.

Varadan’s previous stories, flash fiction, and poems have appeared in literary magazines and anthologies. Imogene and the Case of the Missing Pearls, a middle-grade mystery featuring Sherlock Holmes, was published in 2015 by MX Publishing. Her story, “Kidnapped,” was included in the 2016 Holmes-related story collection, Beyond Watson, by Belanger Books, and “What the Raven Knew” was included in 2019 in Sherlock Holmes, Adventures in the Realms of Edgar A Poe. In 2017 Belanger Books published her picture book, Dragonella, both in English and Spanish, followed in 2018 by a children’s story collection, Carnival of the Animals. Her chapbook, Saudade, Thirty Poems of Longing, was published in 2019 by Finishing Line Press. 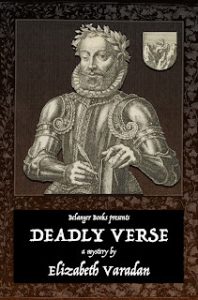 Deadly Vintage, a cozy mystery for adults, released in November 2019, also published by Belanger Books, is set in Braga, Portugal, as is Deadly Verse, its sequel. At present, she is working on a third book in the series, Deadly Variation.

DEADLY VARIATION Carla spies an old friend who says he’s in Braga as a tourist. A street singer sings a song in two languages. A man pats the friend on the shoulder and disappears. Moments later, Carla’s friend is dead.

What brought you to writing? I’ve scribbled for as long as I can remember. My mother encouraged me when I was a child. (She was an unpublished writer.) However, writing full-time had to wait for retirement. I was an elementary/middle school teacher for over 20 years; before that, I worked in insurance (claims), and there were university classes. There wasn’t time to take writing seriously. As for what brought me to writing originally, I think you could say “reading.” There’s something about a well-written page that pricks the imagination.

Has an association membership helped you with your writing? Absolutely. I belong to two writing groups that operate as beta readers, as well as the organization Sisters In Crime and the local Sacramento chapter, Capitol Crimes. (The latter two get professional speakers and nationally known mystery authors who give invaluable information and advice. And my publishers have also interacted in ways that have turned fellow authors and myself into what feels like a group of colleagues working together, supporting each other. In differing ways, all of them have helped me grow as a writer.

Do you have subplots? If so, how do you weave them into the novel’s arc? I generally have one or two subplots going just to keep it realistic: i.e., in my mysteries, there’s a mystery to be solved, the main plot. But characters have ongoing peripheral lives; solving the mystery can’t happen in a vacuum. I try to make sure the subplot isn’t more interesting than the main plot (lol).

Do you base any of your characters on real people? No. I write fiction but have a very literal mind. If I tried to base a character on a real person, I would keep thinking, “but that didn’t happen . . .,” or “it didn’t happen that way . . .” The reality part would keep tripping up my story.

Do you outline, or are you a pantser? Panster. I’ve tried outlining. I outlined a whole book once and found I no longer wanted to write it. It was like the outlining had given me closure on the plot. I really do like, as I write, to find out what’s happening as it unfolds. Sometimes, once the story is underway, I’ll semi-outline what needs to happen in the next scene or two and usually have a light-at-the-end-of-the-tunnel idea of how the story ends. But sometimes, I don’t until the very last chapters.

What kind of research do you do? Suppose I’m doing something from another era. In that case, I look up everything I can think of that might have a bearing on the story: Novels or poetry written in the era (that my protagonist might read), novels about the era or subject, timetables, newspaper articles, weather reports. If set in another country, I look up restaurants and contact police departments (if a mystery is involved). You can overdo research and get lost, but if you sift out things that could become an “information dump” on the reader, all those remaining details can provide great texture that makes a setting believable.

Where do you place your settings—real or fictional locations? Both. I use real towns, real restaurants, hotels, rivers, museums, whatever.

But if something bad happens, I make up the particular café or building where it happens – unless it’s some very public space like a plaza, say, or park, someplace where anything could happen without reflecting on an establishment.

Do you have any advice for new writers? Well, the conventional wisdom is to “write every day,” but sometimes you can’t. It’s still good advice, although “new writers” have usually been writing as often as they could all their lives. So, to that suggestion, I would add “read every day” and read everything, every genre, style, nonfiction, and fiction. Next: take a writing class or two. You don’t have to have an MFA, but a couple of classes or workshops will point you in a good direction, and good books on writing can be a great follow-up. What else? find a good writing group or set of “beta readers.” Shop around. A good writing group’s members should support your strengths while pointing out what doesn’t work for them as readers. (As in, “what I don’t quite understand is why . . ..”) And they catch a lot of errors, as well (typos, repeated words, omitted words, etc.) A good group is invaluable. And last but not least, don’t lose heart or give up. You write because you love it. Keep loving it. Keep writing.