Dragon’s Ridge – An orphanage headmistress must use her wits to escape from a dragon, but only compassion can set her free from both dragons and men. 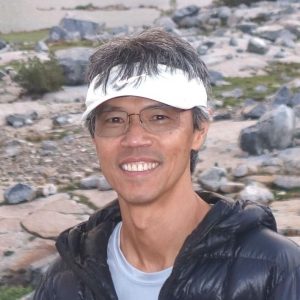 Brian Thao Nguyen Gunney was born in Vietnam and escaped to the U.S. as a refugee in 1975. After briefly considering a creative writing major, he earned a Ph.D. in aerospace engineering and scientific computing from the University of Michigan. He drew on his technical training, outdoor experience, and interest in history to bring dragons into the real world in his first novel, Dragon’s Ridge. Brian works in scientific computer simulations. He writes, hikes, runs, and bikes in Northern California, where he lives with his wife and two teenage children.

Dragon’s Ridge – An orphanage headmistress is snatched, saving a child from a dragon, and the world believes 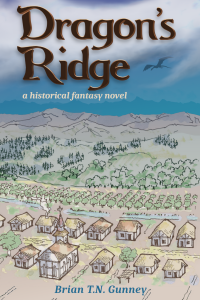 her dead and eaten. For centuries, Gascony’s top predators have treated humankind as easy prey.

But Isodore’s misery has only begun. On a lonely ledge high in the Pyrénées, where even the famed dragon slayers won’t go, she comes to terms with the nature of dragons, her fate in her captor’s hands, and her own dark secret. A child survivor of a dragon’s wrath, she has relied on her wits to stay alive. But it’s compassion that gives that life meaning, stirring a warrior’s idealism, breaching class divisions, and sustaining love for an outcast. On Dragon’s Ridge, Isodore’s struggle brings the two virtues into conflict. She placates her captor to plot her escape, unaware that the plan will cost her a part of herself she can never get back.

Dragon’s Ridge will test the fortitude, resourcefulness, and humanity of the humble headmistress. It will forever change her, the lives she touches, and the world she lives in.

Writing Dragon’s Ridge was an opportunity to present a fantasy setting with scientific plausibility. There is a tradition of minding scientific plausibility in sci-fi, but not so much in fantasy, maybe due to the reliance on magic to explain things. In real life, science and technology are governed by natural laws, with limitations and consequences. When fantasy resembles that, the story feels true to life for me. When it doesn’t, it’s like a free lunch, and there’s no such thing as a free lunch. I’ve enjoyed stories like that, like fairytales or humor or satire. But for adventure stories, I want to feel like I’m right there with the characters, sharing their world and their agency. Scientific implausibility makes it difficult for me.

To complement scientific plausibility, I used a real-world setting. My goal was to make the setting as authentic as possible from the scientific and historical perspectives.

What brought you to writing? I have a very active imagination. A story gets inside my head, and I have to write it down so that it won’t distract me from my work. I had never thought of myself as a writer until I looked back on my life and saw how much writing I had done. Writing is something I’ve returned to time and time again.

Tell us about your writing process: Ideas linger in my head, sometimes for years. They grow without direction or constraint. Sometimes, they collide and happen to fit together like pieces of a puzzle. I think that’s when they turn from ideas into story and grow like a rolling snowball. That’s the inspiration. The telling of the story is the work. My California Writers Club – Tri-Valley Branch critique group, helps keep me making progress. Talking about my drafts helps me think about it, dissect it, understand what’s going on, and see things I had overlooked. Not only can I fix what’s wrong, but I can also find out what else I could add to the scene.

In the editing process, polishing the manuscript for publication is challenging. Writing is fun and something I do for myself. Moving toward publication means getting a lot of technical things right. It’s important but tedious. I struggle with certain details of the English language, particularly with verb tenses and plurals.

Has an association membership helped you or your writing? Being around writers in TWC reminds me that it’s okay to write. The encouragement I received kept me going when I was stuck. My critique group helps to keep me writing regularly. I knew nothing about publishing or marketing books. Learning from speakers and my peers about how all that works is very helpful to give me an idea of the road ahead.

How long did it take you to write your first book? The idea first came to me about thirteen years ago, and I put the first words down eight years ago. I worked on the book six out of those eight years. In all, I wrote five complete drafts.

How long to get it published? Once I decided to publish the book, it took almost two years. I continued working on the manuscript because I was still studying the art of writing and incorporating what I learned into the manuscript as I was preparing for publication. I didn’t have any luck after a few months of trying the traditional publishing route. I believed I had a good story to tell, so I approached Paula Chinick of Russian Hill Press, an independent publisher in our writing club.

Do your protagonists ever disappoint you? No. As long as a character is authentic, I find them interesting. My characters seem to have minds of their own. If they go off-script, that’s all the better. It shows they’re independent of me. The best ideas come from them acting on their own.

Do you have subplots? If so, how do you weave them into the novel’s arc?  As a novice, I used to be concerned that I didn’t have enough subplots, but when I saw how long Dragon’s Ridge was getting, I stopped being so concerned. Weaving in subplots, for me, is a lot of work. I usually don’t know the subplots ahead of time, so when I get an idea, I have to do quite a bit of rewriting and editing to weave it in tightly.

How do you raise the stakes for your protagonist—for the antagonist? Isodore is fighting for her life from the first scene, so the stakes start out very high for her. But it’s when she wants more than just to live that the reader sees the full depth of her character. For her, the stakes were raised by the opportunity to get things she had thought were out of her reach. Can she bring peace between two enemies? Will she avenge the injustices she had to endure? Could she be her true self? It’s similar for the antagonist. He’s not concerned only with the present struggle. He wants to survive the changes he knows are inevitable, among other things.

I didn’t start the story with complex stakes. They kind of created themselves. I think authors get to play god in their stories, but I don’t think I’m the kind of god who rubs my hands together saying, “Ah-hah!” After constructing the premise of Dragon’s Ridge, I mostly left the characters to find their way to the ending. I like being the observer more than the master.

What kind of research do you do? I had to learn a lot about the setting to figure out how the characters would interact with it, everything from the daily life of peasants to historically significant events. I read up on medieval history, and it’s fascinating. The medieval world was dynamic and lasted a thousand years. It started as the remains of the western Roman Empire and became the foundation of the Renaissance. Popular culture often portrays a composite setting, putting together elements that didn’t overlap much, if at all, in real life.

An example is the chivalrous warrior knights in shining armor. Knights of the Early Middle Ages didn’t care much about chivalry, which was a concept invented by the clergy to incentivize more civil behavior from the warrior class. By the time shining suits of armor came around, knights pretty much stopped being warriors. They were more like athletes competing in tournaments.

I also read about the people, their language, and their technology. I studied the geography and the ecology of the region. I obviously inserted elements of fantasy into the setting. Still, I wanted to keep that minimal and make the setting as historical as I could.

For scientific realism, I had more of a head start because of my aerospace engineering background. To make sure I had scientifically plausible dragons, I did some aerodynamics calculations, which led to a blog post. I also looked at recent theories on giant pterosaurs. I was comforted that my dragons aren’t much different in size than those prehistoric flyers.

I even made tallow torches to verify that what I wrote about them was accurate.

After studying the medieval world, I can’t help but change my perspective on my life a little bit. Salt, one of the cheapest and most ubiquitous commodities in our world, was once available only to the most important people of the medieval world. Now, when I measure out half a teaspoon of salt, I feel rather privileged.

In addition to presenting the book, the website has a blog and a contact page. I also have set up an author page at Good Reads: https://www.goodreads.com/author/show/21950689.Brian_T_N_Gunney 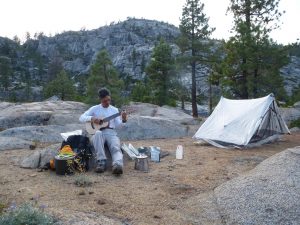