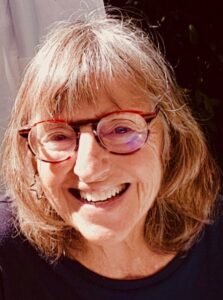 Glenda Carroll writes the Trisha Carson mysteries that take place in the San Francisco Bay area, from Oracle Park, home of the San Francisco Giants to the beautiful lakes in the East Bay to the tree-lined streets of Marin County.

Her mysteries are set in the world of open water swimming. The third book of the series Dead Code will be published by Indies United Publishing House. The launch date is October 27, 2021. Books one and two, Dead in the Water and Drop Dead Red, introduced Trisha Carson, a 40-something woman trying to find her way in the world, and her family to the mystery reading community.

When not writing, she tutors high school and college students for Canal Alliance, San Rafael, in English and occasionally History. These are first-generation teens who understand that education is the way out of poverty.

What brought you into writing? Good question. I never, ever thought I would write fiction. For almost twenty years, I was a 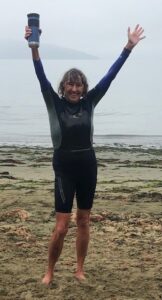 sportswriter for the Marin Independent Journal. I covered mostly water sports: sailing and sailboat racing, boating (in general), surfing, some swimming. I remember someone once asked me, “Do you have a novel in there?” I was miffed. “How can you write about something that isn’t true?” I huffed and puffed. But I found that not only could I use my imagination and find dead bodies in all types of strange locations. But I liked doing it!

What is your writing process? Several years back, I entered a NaNoWriMo 6-word contest about writing. “Write like a hurricane. Edit later,” was my prize-winning entry. That seems to be what I do. I blast through the first draft. After that, it’s torture. I write draft after draft. I often take out big chunks of copy and put them in a special deleted file. I’m not sure why I keep them. I have never used anything that I’ve buried in that file. For Dead Code, three people volunteered to be my Beta readers. It was the first time I was that organized to ask for help. They were great…excellent suggestions that made the manuscript better.

Have you ever had writer’s block? Oh yes. When I was writing the first book in the series Dead in the Water, I reached a point where I didn’t know what to say and what to type. At those times, I would go out and cut the grass. I had an old-fashioned push mower, and it was in the middle of summer. Maybe it was the dripping sweat that kickstarted my brain, but when I came back inside to my cool house, my mind was working again.

How do you come up with characters’ names? For the protagonist of the series, Trisha Carson, I knew her age and researched the popular girls’ names the year she was born. After that, I began to use the names of family members. In all the books, there is a character I called Inspector Carolina Burrell, San Francisco Police Department. That moniker contains my granddaughter’s name and the name of a former San Francisco Giants outfielder, Pat Burrell. I used my sons’ first names for ballplayers on the Giants. My grandson Caden’s name was used for a secret swimming spot, Caden’s Corner. If you’re related to me or even someone I admire, your name will be usurped at some point.

Do you have subplots? There is definitely a subplot in Dead Code. As I mentioned earlier, the first two books of the series are firmly set in the world of open water swimming, and the plots are water-oriented. Dead Code moves away from being totally involved with water into the world of hacking. (There are swimming scenes for those who can’t get enough of H2O.) Just as I finished the first draft, I had my identity stolen. My hacker found his way into my bank accounts, health care, phone, and email. I tore my hair out for about a week, trying to understand what was going on and how to stop it. I knew I had to add that to the manuscript. I rewrote the whole thing so Trisha could share my pain. She hated it as much as I did.

Do you outline, or are you a pantser? Honestly, I seem to start in the middle and work toward the beginning and the end. I usually don’t know ‘who did it’ until I write it. However, I tried to become more organized with book two. For Drop Dead Red, I carefully worked out an outline. Then I started writing. I didn’t make it through the first chapter before I strayed from the outline. I’m not sure why I can’t stick to an outline. I just can’t. I wish I could. 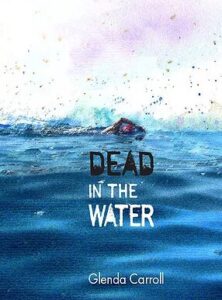 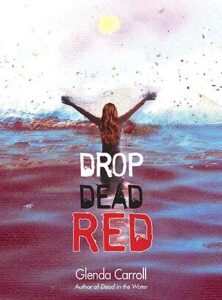 What are you currently working on? As I mentioned, I am approaching the finish line with Dead Code. This is a different subject for me, involving hackers and ransomware. I only had a cursory knowledge of the computer crime world. I needed to read everything I could on the subject, and I even lurked on a few hacker bulletin boards. My sister’s sweetheart started his own computer security firm ages ago, and he was happy to answer all my questions, from the simplest to the most complex. He even made a few plot suggestions.

First, keep reading—everything you can. But be critical (in a good way) of the text. How does the author use verbs? What are transitions like? What makes you say, “I wish I wrote that sentence, paragraph, chapter?” Does the ending work?

Second. Do your best to keep that inner voice that tells you. You don’t know what you’re doing at bay. Half the time, I never know where the story is going until I write it. However, I am beginning to have confidence that something, maybe even something worth reading, will come out of the process.

Third. Write. Even when you don’t want to.

Looking to the future, what is in store for you? As you might guess, I write about open water swimming, because I swim in open water (as well as a pool). I swim in rivers, lakes, the ocean, and over the past year in the chilly San Francisco Bay. I’ve raced in more than 150 open water events in Northern California and Hawaii, and Perth, Australia. Currently, I am training for an Alcatraz swim in early September. I was swimming along the other day in the choppy Bay, putting in the distance, and the idea came to me for the next book. A swimmer is making their way across the Bay, and she is being escorted by a pilot boat. The swimmer gets a bit off course, and when she turns to look back at the boat, something is strange. She swims over to it, and the pilot (the captain or driver of the boat) has disappeared. The swimmer and the empty boat are in the middle of the Bay, alone. Sound interesting?