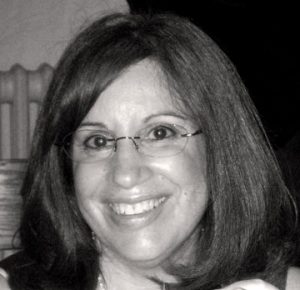 USA Today and Amazon bestselling and award-winning author Lois Winston writes mystery, romance, romantic suspense, chick-lit, women’s fiction, children’s chapter books, and nonfiction under her own name and her Emma Carlyle pen name. Kirkus Reviews dubbed her critically acclaimed Anastasia Pollack Crafting Mystery series “North Jersey’s more mature answer to Stephanie Plum.” In addition, Lois is a former literary agent and an award-winning craft and needlework designer who often draws much of her source material for both her characters and plots from her experiences in the crafts industry.

Shortly before Covid hit and the world closed, my husband and I attended a wedding that was held at a former private estate in New Jersey. Sitting on acres of prime real estate in one of the priciest counties in the United States, the estate with its manor house claims to be “the most exclusive, private and sought-after venue for weddings, private social events and corporate meetings in the country.”

The land on which it sits was purchased in 1912 by renowned New York City industrialist Charles Walter Nichols. He hired Augustus N. Allen, one of the premier architects of the day, to create a home reminiscent of the Norman architecture of Northern France and Southern England. The landscape architect Augustus E. Furlong (I wonder how common Augustus was as a name back then, given the coincidence!) was hired to transform the grounds into a combination of formal gardens and woodlands featuring ponds, streams, and meandering footpaths.

In 1994 the estate was purchased, updated, and opened as a conference and event center. It’s also become a much sought-after filming location for major motion pictures and television shows, as well as for fashion photoshoots.

I’ve found that too often, wedding venues are over-the-top gaudy with far too much faux gold, crystal, and marble for my taste. This estate was spectacular in its understated elegance. I could easily envision the family who called it home at one time. I certainly wouldn’t mind living there—if I had a few hundred million dollars!

For the tenth book in my Anastasia Pollack Crafting Mystery series, I had decided to have Anastasia present a series of needlework workshops at a conference for an organization of retired women. But I didn’t want the conference held in a hotel. I wanted a more secluded, private setting for the plot I had in mind. The estate where I’d attended that wedding was the perfect location.

A book’s setting should play an integral part in the story. There should be a reason why the author chooses to set her story in a particular town or place. Sometimes authors make up locations. Other times they set their stories in real settings. And sometimes they fictionalize real locales, which is what I chose to do for Stitch, Bake, Die!.

For me, basing my settings on actual locations enables me to give my readers a better sense of where the scenes are taking place. For this book, I could close my eyes and see all the details of the estate where my story was unfolding as I wrote it because I’ve been there. I’ve wandered the many rooms of the manor house and walked the grounds. I hope that the picture I’ve painted with my words enables my readers to see in their minds what I saw with my own eyes.

You’ll notice, though, that in this article, I haven’t named the estate where the wedding took place. In the book, I’ve deliberately given the location a fictitious name. After all, this is a mystery series, and there’s murder afoot!

Have you ever read a book that took place in a fictional setting but were convinced it was actually a place you knew? 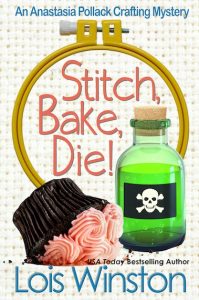 With massive debt, a communist mother-in-law, a Shakespeare-quoting parrot, and a photojournalist boyfriend who may or may not be a spy, crafts editor Anastasia Pollack already juggles too much in her life. So she’s not thrilled when her magazine volunteers her to present workshops and judge a needlework contest at the inaugural conference of the New Jersey chapter of the Stitch and Bake Society, a national organization of retired professional women. At least her best friend and cooking editor Cloris McWerther has also been roped into similar duties for the culinary side of the 3-day event taking place on the grounds of the exclusive Beckwith Chateau Country Club.

The sweet little old ladies Anastasia is expecting to meet are definitely old, and some of them are little, but all are anything but sweet. She’s stepped into a vipers’ den that starts with bribery and ends with murder. When an ice storm forces Anastasia and Cloris to spend the night at the Chateau, Anastasia discovers evidence of insurance scams, medical fraud, an opioid ring, long-buried family secrets, and a bevy of suspects.

Can she piece together the various clues before she becomes the killer’s next target?

Links to buy books and where to visit Lois: