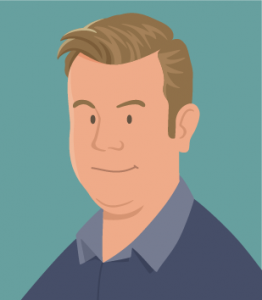 By day, Ryan teaches technical writing and stops the spread of unnecessary adverbs and vague pronoun references. By mid-afternoon/early evening, he fights crime with his trusty sidekick/toddler son. Together they have uncovered who, in fact, has got your nose and tracked the elusive Peekaboo. They live, eat, and occasionally sleep in North Texas with their Brussels griffon pup.

Ryan is a member of the Alliance of Independent Authors. Visit him at http://www.ryanriversbooks.com

Arbor Day Can Be Deadly is a lighthearted novella in The Bucket List cozy mystery series. 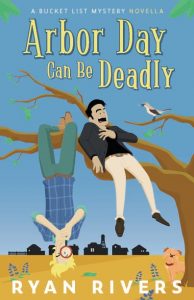 Sho Tanaka is running from his problems. Placed on extended leave after a traumatizing incident led to his prescription drug addiction, the once-successful ICU nurse flees to his estranged sister in Texas. But when the tiny town’s Arbor Day Festival ends with him getting accidentally punched in the face, he makes an unexpected friend in the man who comes to his aid.

Former tween TV detective Levi Blue plans to never be forgotten. Fearing his father’s fate of an early death, he returns home to check in on his fan museum’s progress when a fight between the mayor and police chief takes out an innocent bystander. So, turning on the fading celebrity charm, he ropes the new guy into his mission of hunting down his missing construction manager.

Still feeling like a fish out of water, Sho reluctantly helps his benefactor question the mayor, who claims to be afraid for her life. And Levi’s “experience,” tells him they’ve stumbled onto a crazy conspiracy full of corruption, fraud… and sudden threats to their lives.

If you like complex characters, laugh-out-loud moments, and clean whodunits, I invite you to download this novella for free: https://BookHip.com/QWCVWAW

Tell us about your writing process: As a full-time academic and single parent, I look for any pocket of time to write. Sprints have been invaluable to my writing process.

I wrote most of my Bucket List Mystery novella in 5-minute sprints, while my son hung out in his crib after diaper changes. In the afternoons, we’d stroll in the park, and I’d dictate into my phone in 15-minute sprints. When you do that consistently, the words add up, and I soon had a first draft to edit.

All the “best practices” say I should write in the morning, but I find it therapeutic and relaxing to write in the evening, right after my son goes to bed. Writing in the evening diverts my focus from any bad events from the workday, and I actually sleep much better.

How do you come up with character names?: My stories take place in a fictional Texas Hill Country town, located between Austin and San Antonio. Many of my character’s names are inspired by Texas towns and landmarks – Abilene, Odessa, Wayland, Vaughn. My son and I road trip through the Hill Country often, so I keep a running list of character names.

I also have a secret, slightly embarrassing way of coming up with characters’ names. I started writing during the pandemic – while caring for an infant, – so there were lots of moments where I was too tired to read, write, or think.

Naturally, I watched a lot of trashy reality TV, and what’s trashier than the boozy socialites on the Real Housewives of New York? So, yes, I have one character in every story named after a housewife – Aviva, Ramona, Sonja. If you know your Housewives’ history, it’s only a matter of time before Jill, Bethenny, and Dorinda appear.

What kind of research do you do? Each of my Bucket List Mysteries centers around a hobby or community event—aerobics, barbecue competition, community theatre—, so I first research these worlds. I spend lots of time in half-price/discount bookstores; college towns are known for eclectic tastes, so I find sources here I wouldn’t otherwise.

I also watch a lot of YouTube videos and documentaries on my hobby – this helps be visualize the settings and listen to speech patterns for writing dialogue.

I take lots of notes, and eventually, characters (or suspects, victims, and killers) emerge. Once I understand the world these characters could live in, motives for murder and deep secrets emerge.

I then brainstorm how to join this world with my other fictional world of Bluebonnet Hills, Texas. Sho and Levi bridge both worlds, so I need plausible ways for them to, for example, become extras in an aerobics video.

As I work, flashes of scenes or snippets of dialogue pop into my head. When I can visualize a scene, I know I’m on the right track. I take lots of notes and clumsily organize them into a plot. Then, I take off and see where the characters land.

Other authors have more efficient research processes, but I find immersing myself in these worlds helps me construct realistic plots and characters.

What are you currently working on?: Right now, I’m editing Aerobics Can Be Deadly, the first novel in the Bucket List Mysteries.

Fearing his father’s fate of an early death, former tween TV detective Levi Blue begins his bucket list. He enlists his new best buddy Sho Tanaka to help him train for a triathlon.

But the triathlon training detours when Levi instead takes part in the filming of an aerobics video with fitness icon Barbara Lou Sinclair. Stop me if you’ve read this before, but someone ends up dead, and it’s up to Levi and Sho to crack the case and keep Bluebonnet Hills safe.

Aerobics Can Be Deadly will be published in September 2022, but you can preorder it from your preferred eBook retailer: https://books2read.com/u/mgEnw0

Looking to the future, what’s in store for you?: Hopefully more Bucket List Mysteries. My novels are an “alphabet mystery” series. The keyword for each title starts with the next letter of the alphabet: Aerobics Can Be Deadly, Barbecue Can Be Deadly, Comedy Can Be Deadly, etc. With this system, I pretty much have the next 26 years planned out! 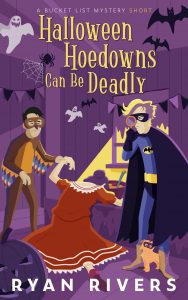 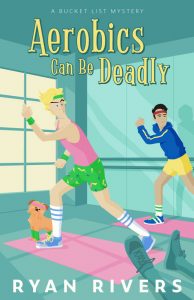 I also enjoy writing shorter fiction in this world. Those novellas and short stories are titled with a holiday: Arbor Day Can Be Deadly, Halloween Hoedowns Can Be Deadly, etc.

I have ideas for other cozy series, but for now, I enjoy my regular visits with Sho, Levi, Jenny, and the residents of Bluebonnet Hills.